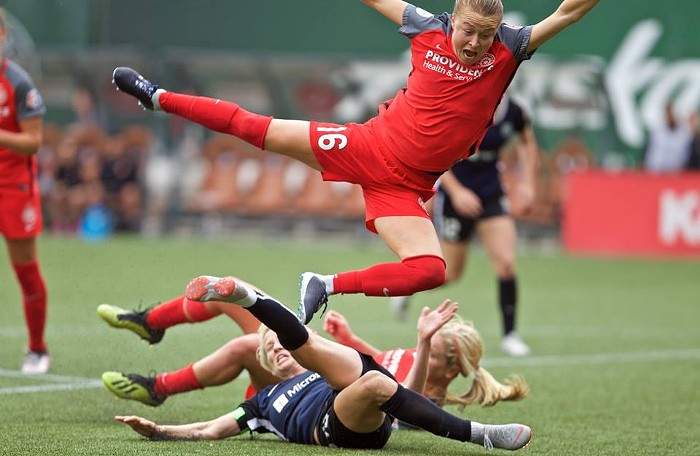 National team experience: Sonnet has played 33 games for the USWNT and scored zero goals. During the 2019 SheBelieves Cup, she was used as a substitute in two of three games.

What to expect from Emily Sonnett in 2019: Like so many of the players on the USWNT, Emily Sonnett was a star player in college who was selected number one overall in the NWSL draft. You’d think that players who fit that profile would be locks to make the national team and star on the international stage as well. That’s not always the case — as an article from her club team, the Portland Thorns, points out – only half of the players who get to play a game with the national team make it to their tenth “cap” or appearance with the team. Many of those players have similarly amazing backgrounds. After somewhat consistent time with the national team starting in 2015, Sonnett was dropped out of the rotation for much of 2017. Now she’s back as a reserve wing back, playing most frequently behind Kelly O’Hara on the right side of the field.

Unlike the starting wing backs for the team, Sonnett actually is primarily a defender. Although she played striker as a kid (her twin sister was the fullback of the family,) she switched to defense at the start of college and has played consistently there ever since. She’s the type of defender that you want to have if you’re (like I was in my playing days,) a slightly slower player, prone to mistakes, because Sonnett is fast enough, clever enough, and tenacious enough to clean up for your errors. As we already know from the USWNT’s lineup changes for Game One of the 2019 World Cup, the depth of the team on defense is thinner than at other positions and has already suffered an injury. A couple more, and Sonnett will be thrown into the mix. We also might see her in Game Three against Sweden if the game is not important to advancing to the knockout stage.

Links: A couple of good articles about Sonnett from ESPN and the Portland Timbers/Thorns website, plus her Wikipedia page, U.S. Soccer page, and Twitter.