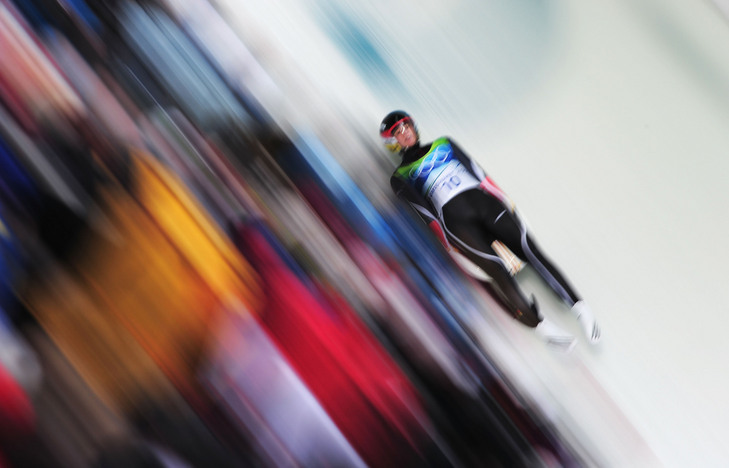 To prepare for the Winter Olympics in Sochi, Russia which begin on February 6, 2014, Dear Sports Fan is going to run a series of previews of Winter Olympics events. So far we’ve profiled Skeleton and Bobsled.

All About the Luge

The luge is in that set of Winter Olympic sports that take common place winter past-times and turn the intensity up, up, up. Luge is basically sledding on a combination of speed and steroids. Luge is sledding after years of evolutionary change.

How Does Luge Work?

Luge racers ride on a minimalist sled that consists of not much more than two metal runners and a seat. There are no steering or braking mechanisms. They get up to speed by sitting up on the sled and propelling themselves down the first part of an icy track with specially made spiked gloves. As soon as they swooshing along, they lie back on the sled to become as aerodynamic as possible for the rest of the ride. Their equipment: skin-tight rubber suits, rounded helmets, and even specialized luge shoes are all designed to reduce wind resistance. From their backs, luge riders hurtle down their evolutionary sledding hill which has become a steep, skinny, and deviously winding concrete U covered only by a thin sheet of slick ice. The athletes, lying flat on their backs, can reach speeds close to 90 miles per hour and through turns can impose up to 5 Gs of pressure on their bodies.

Here is a first-person video shot of a luger practicing on the Olympic track:

What Are the Different Luge Events?

Olympic luge has Men’s single races, Women’s single races, and gender-neutral doubles races that basically always consist of two men because weight is an advantage. This year the Olympics will add a new luge event — the team relay. This race combines all of the previous races into one. Each country gets one men’s single, one women’s single, and one doubles sled. They are sent down the track in succession with the next sled only being allowed to start when the previous racer has reached the finish line and hit some kind of electronic sensor with their hand (or foot or elbow, or head, or whatever is fastest, I would imagine.)

How Dangerous is Luge?

It’s one of the more dangerous Olympic sports. Traveling at almost 90 miles an hour down an enclosed track of concrete reinforced ice turns mistakes into tragedies all too easily. The last Olympics in Vancouver were marred by the death of Georgian luger, Nodar Kumaritashvili during a practice run. Kumaritashvili’s death sparked a dialog about how the designers of luge runs are leading the sport into faster and more dangerous territory for the sake of gaudy speed figures.

What’s the State of Gender Equality in Olympic Luge?

Moderately okay. On paper it looks a little better than it really is. Men and women’s singles events are the same number of runs (four) but they start at different heights and are therefore different lengths. The doubles competition is officially open to any gender but invariably is stocked with male athletes.

What Are Some Fun Olympic Luge Stories?

Well, okay, we all saw the movie Cool Runnings about the first Jamaican bobsled team to qualify for the Olympics. We laughed, we cried. In 2014 the parallel story is about Shiva Keshavan who became the first Indian athlete to represent his country in the Winter Olympics by qualifying in luge. He’s being called “Spicy Runnings” and this video of him training on a Himalayan road is incredible.