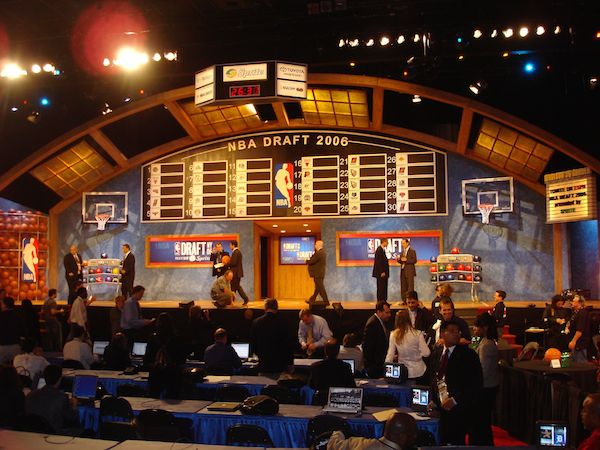 The NBA Draft – How does it work? Why do I care? Are players (like Carmelo Anthony and What’s-His-Name James) that go right from high school involved in draft?

Drafts in all sports are an opportunity to level the playing field – the worst teams generally get the higher picks and first dibs on the best young players. In the case of the NBA, the 14 worst teams are in the “lottery,” meaning they get the top 14 picks in the draft – only the order those 14 teams pick in is decided based on an old-school, ping-pong ball lottery.  So while the worst team has the best odds of getting the first pick(they get more ping-pong balls in the bingo cage-thing), it isn’t guaranteed.

Not a big deal, you think – after all, what’s the difference between picking number one or number two or three?  Well, if you’re a team from a smaller market who has a hard time attracting the best players, the draft is a very rare opportunity to get a franchise-altering talent at a price you can afford.  In particularly mediocre draft years, the difference between the best player and the second best player in the draft is barely noticeable – other times, the difference is between a game changer like Spurs power forward Tim Duncan (think Chris Rock) and a wildly overrated underperformer like the forgettable Keith Van Horn (think Dane Cook).

Talking about comedians, if you decide to try to pull the Sports Fan in your life away from watching the NBA draft tonight, you could do worse than start with this clip of Dave Chappelle’s Racial Draft sketch.

How great is the Tiger Woods bit in hind-sight? Back to the NBA draft… High school players used to be allowed in the draft – now, in a nod to the fact that you learn everything you need to know in college your freshman year, you have to be 19 years old, at least one year out of high school and own one suit with at least 4 buttons to be eligible.

There’s also an unofficial rule that there has to be at least one successful white college player in each draft who gets picked in the first round even though pretty much everyone agrees he will not be successful in the NBA due to his lack of “athleticism.”

Back to the draft itself: it’s divided up into rounds, and generally each team has a pick in each round, unless they don’t have picks – for example, if they’ve traded their draft pick (essentially the right to a future player) to another team in return for a tangible, current player. Teams have a limited amount of time to make each pick, which is why team staff do ridiculous amounts of research and know more about the players than they do about their own children. There is real drama in some drafts – last second trades, surprise picks,[1] great rags to riches stories – but for the most part, you have to be a pretty die-hard fan to watch. So don’t feel bad if you can’t get into it.

The NBA Draft – How does it work? Why do I care? Are players (like Carmelo Anthony and Whats-His-Name James) that go right from high school involved in draft?
Footnotes    (↵ returns to text)