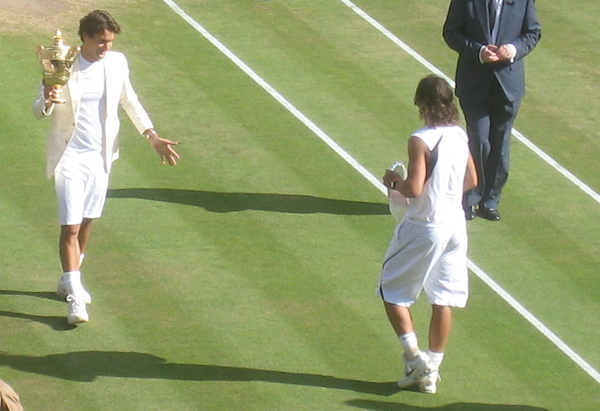 Doesn’t anybody ever get tired of watching Federer and Nadal in the finals of every tennis tournament, forever? Is there any reason to even watch Wimbledon now that Andy Roddick is out?

I’m sure that it does get awfully tiring for all the other men’s tennis players, but for sports fans and specifically tennis fans I think it’s something that far from getting tired of, they savor every minute of.

First of all, Rafael Nadal and Roger Federer’s consistency at the top of men’s tennis is really unusual. So what seems like a boring fact of life for the last seven years is a rare anomaly in the context of the last fifty plus years of tennis. And even during the Federer-Nadal years, it may seem like they meet in the finals every tournament, but before this year’s French Open a month ago, they had not played in a final match for over two years!

Tennis fans root for Nadal and Federer to play each other in part because they play with such contrasting styles. Federer is a mix between a magician and a matador. He is a magician not only because he always seems to be pulling winning shots out of his sleeve, but also because he has the slightly smarmy elegance of a magician. Everything he owns is monogrammed with a big RF in an annoying faux-royal font. Federer makes very little fuss on the court. He almost never grunts and he rarely even appears to be sweating. Roger Federer is your older brother who beats you and doesn’t even dignify your efforts by looking like he’s trying hard or cares at all. Federer also had the luck of being profiled by David Foster Wallace in a New York Times Play magazine article that made a lasting impression on the literati; check it out, it is worth reading.

Nadal, on the other hand, is most often compared to a bull. He has even embraced the comparison by adopting a bull logo as his mascot. Nadal is the younger brother. He never, ever, ever, stops trying. He’s a powerful player and his natural talents are defensive. He’s frustrating to play against because no matter how good of a shot you hit, he seems to be able to get to it and return it back to you. Nadal looks more like a cat than a bull. His movements are quick and powerful without being out of control. Every step is aggressive. When the players talk to the chair umpire before the match begins, Nadal bounces up and down on his feet like a boxer.

Would you enjoy Bugs Bunny more if he didn’t always face off against Elmer Fudd? An episodic Star Wars where Luke Skywalker fights against a different bad-guy each hour would surely be less satisfying than his epic contest with Darth Vader. There is something special about watching two people who know that no matter how well they do, to succeed they have to beat the other. The diner scene in Heat expresses this understanding perfectly.

Right now there is a special pathos to the Nadal-Federer rivalry. The normal narrative of the younger player succeeding the older is being challenged. Federer is not diminishing quite as quickly as people expected he would and because of Nadal’s powerful style, there is a fear that his body will break down at any moment. They are two of the best players in history but they are increasingly both vulnerable and mortal.

Enjoy the tennis if you can, I will!

4 thoughts on “Why Isn't Everyone Tired of Nadal and Federer?”