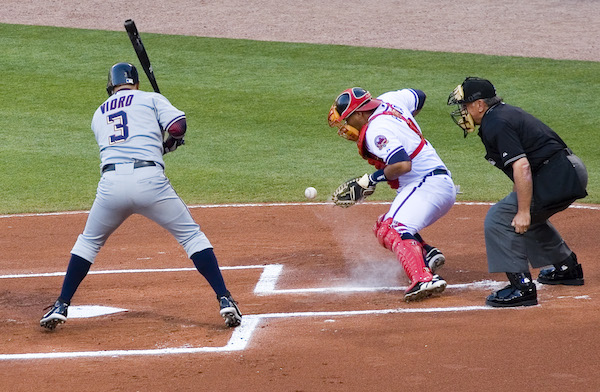 I’m curious about baseball slang. What does it mean to strike out “looking?”

I’m curious about baseball slang too! I think there are a lot of compelling elements of it — many of them [ahem] colorful! What I think you’ve got here though, with the phrase “to strike out looking,” is somewhere between slang and straight terminology. We should be able to unpack it fairly easily from a technical angle and maybe even add a little extra how-to-use-this-in-a-non-sports-setting as well.

Baseball is made up of a series of one on one contests between a pitcher and a hitter. Each pitch has a result — a ball, a strike, a home run, a foul ball, a fly out, a ground out, etc. I’m going to assume that most of you know what a ball and a strike are. If not, we’d be happy to write another post about them! The contest is over when the batter hits the ball, when the ball count reaches four (a walk), or when the strike count reaches three (a strikeout). A strikeout is the worst thing that can happen to a batter because they lose the chance to hit the ball. It is true that if they hit the ball and someone catches it they are equally out but at least in that case they’ve forced the other team to make a play (that they could theoretically mess up) to get them out.

Assuming that a batter is going to strike out, there are two ways for them to get that third and final strike: they can swing and miss the ball or they can not swing and the pitch can be called a strike[1] by the umpire. When a batter gets that last strike on a pitch that the batter chooses not to swing at it is said that they “struck out looking.” To strike out swinging is to get that third strike by swinging at the ball and missing. I’ve looked around a bunch and despite the enormous amount of statistical analysis that has been done on baseball in the past twenty years or so, I can’t find anything that says whether it is actually better for a batter to strikeout swinging or looking.

What is clear is how the phrases have entered the vernacular. In common usage, to strike out looking is to fail without even trying. For instance, assuming it’s girls you’re after, say one night you see a cute girl at a bar and talk to her for a while. When it’s time to go, you have two options: you can ask for her number or say goodbye and walk off. If you would like to call and “striking out” would be to not get her number, what you don’t want to hear from your buddies later is that you “struck out looking” by not even asking!

5 thoughts on “What Does it Mean to Strike Out Looking?”