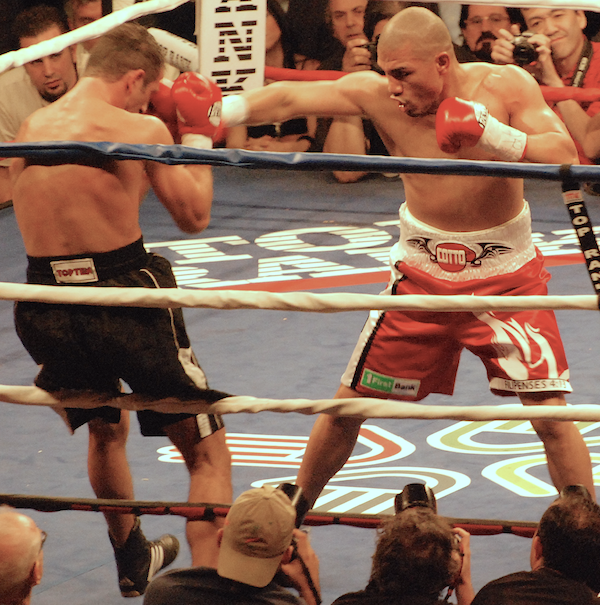 What does it mean for someone to be “on the ropes?” I heard it the other day during a hockey game but I think it’s a boxing term. While you’re at it, what is “rope-a-dope” and are they related?

You’re right, they are both boxing terms although they get used in the context of other sports as well as just in normal conversation. We’ll define what they mean and how you can use them in this post.

They call boxing the sweet science for a reason: because despite the fact that it may look like two sweaty combatants flailing away at each other – or running away from each other – in reality boxers enter the ring with deliberate strategies and do their best to execute them.

Still at some point in a fight, one boxer may get the upper hand and land a few devastating punches, leaving his opponent senseless and barely able to stay on his feet, let alone defend himself. In such cases, a boxer has two choices to keep himself upright: leaning into and grabbing his opponent (known as “clinching”) or leaning back on the ropes surrounding the ring and using his gloves and arms to cover up as much of his body and head as possible. When a fighter does this, and his opponent pummels him endlessly in search of a knockout, the fighter covering up is said to be “on the ropes.”
But remember – they don’t call it the sweet science for nothing. A boxer who sees his opponent cowering and leaning on the ropes,  seemingly defeated and therefore posing no threat, may become overconfident – and in his quest to finish his opponent he may exhaust himself by throwing bunches of punches that don’t actually do damage.
Thus a particularly clever and gutsy boxer may pretend to be more injured than he is, encouraging his opponent to throw too many punches in a vain effort to knock him out – and then, turn the tables and go on the offensive when his opponent has punched himself out (ie, exhausted himself by throwing too many punches).
The most famous example of this strategy being put to use is known as the “rope-a-dope” – when Muhammad Ali lured an aggressive George Foreman into attacking relentlessly for the first seven rounds of the famed “Rumble in the Jungle” in 1974. Ali did this not only by seemingly letting Foreman dictate the action, but by taunting Foreman mercilessly. Foreman wore himself out and Ali seized the initiative and knocked his drained opponent out in the eighth round.
Today, the term “rope-a-dope” is just as likely to be used to blithely describe political or business strategy as it is to describe a fighter’s approach in the ring. But it’s worth remembering the original principle: being willing to absorb potentially devastating punishment with the knowledge, or hope, that you ultimately have the ability to outlast your opponent.
Thanks for the question,
Dean Russell Bell