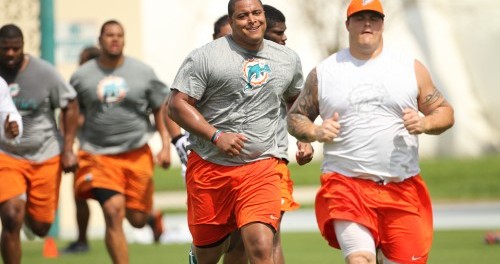 Since October 30 a scandal has been swirling around the Miami Dolphins football team. The facts of this situation are clear but the implications are not. The two main characters are both offensive linemen; second year tackle, Jonathan Martin, and ninth year guard, Richie Incognito. USA Today has a useful timeline of how the story was uncovered, beginning with Martin leaving the team to seek “professional assistance for emotional issues,” progressing to allegations followed quickly by proof of Incognito’s harassment of Martin, and followed by Incognito’s indefinite suspension by the Dolphins. That action was taken on November 4th and since then not much has happened but much has been written, analyzed, and discussed. Surprising though it may seem, the reaction has been mixed, with almost as many voices, including many of the Miami Dolphins’ players, taking up Incognito’s case as Martin’s. We’ll listen to both sides and then attempt to identify an underlying question about sports that might account for the mixed reaction.

Incognito and the culture that fostered him is flat-out wrong

The case against Incognito is clear. He was a powerful figure on the team, a member of their leadership counsel, an experienced veteran who had been honored last year with a trip to the NFL’s all-star game, the pro-bowl. He abused that power by mocking, intimidating, and threatening a younger, less established teammate. On the way, he was recorded on Franklin’s voicemail threatening to slap Franklin’s mother and using racial slurs to denigrate his bi-racial heritage. The fact that this was allowed to continue in an NFL team for months if not years is an indictment of the NFL and the Miami Dolphins organization. The fact that many, (even any would be too many, according to this argument,) NFL connected people are defending Incognito at all is an indictment of football culture.

Two interesting takes on this argument come from Jason Whitlock of ESPN and Brian Phillips of Grantland.com. Whitlock places the incident in a racially and culturally charged context and his lead paragraph is as effective as any I’ve read:

Mass incarceration has turned segments of Black America so upside down that a tatted-up, N-word-tossing white goon is more respected and accepted than a soft-spoken, highly intelligent black Stanford graduate.

Whitlock argues that the Dolphins were a particularly bad organization for someone with Martin’s background and personality to end up in, that their locker-room was a “cesspool of insanity.”

Phillips places the incident into the larger narrative of mental illness, particularly the mental illness experienced by NFL players that shows every likelihood of being caused by brain injuries sustained while playing football. Phillips spends much of the article railing against what he describes as the “room-temperature faux-macho alpha-pansy nonsense” culture that makes it possible to vilify someone for seeking help for an emotional or mental issue. He’s most effective though when he advocates for what he believes should be the outcome of this episode:

There’s more to it, maybe Incognito was a little right

The argument that Incognito was right, or at least not completely wrong, usually starts with a caveat something like the one Andrew Sharp, also of Grantland.com makes in his article on the case, that “the daily life of elite athletes exists with codes and behaviors so alien to normal life, it’s impossible to peer in and expect it to make sense.” A former teammate of both the men, Lyndon Murtha, wrote an article in MMQB.com which he begins by claiming that he doesn’t have a “dog in this fight” because he played with both of them. But he does, his dog is football, and its existing culture. The website rightly uses Murtha’s comment that “Playing football is a man’s job, and if there’s any weak link, it gets weeded out. It’s the leaders’ job on the team to take care of it.” as a pull-quote. It is the core of his argument in favor of Incognito — that Incognito was doing a positive act of service to the team by making Martin prove his toughness and that Martin failed that test.

How true is that? It is absolutely true that playing football requires great toughness. And it is true, particularly for linemen, that they are responsible for the quite literal physical safety of their teammates. Michael Lewis makes this point indelibly clear in his book The Blind Side which begins with the story of haw a mistake by an offensive lineman led to a terrible compound leg fracture which ended quarterback Joe Theisman’s career. Writer turned pundit Tony Kornheiser expressed this general perspective on his radio show, (while also being careful to admit he was concerned it made him sound like an ogre,) and connected this need for absolute trust to the need among soldiers. Phillips argues convincingly against this in his article by pointing out that the U.S. military has evolved to have “a system in place to keep this in check.” When he heard that the Dolphins’ coaches may have played a role in encouraging Incognito’s behavior, as confirmed in this Sun Sentinel article, Kornheiser immediately made a referential connection to the 1992 movie, A Few Good Men, and Jack Nicholson’s famous speech in defense of behavior in some situations that would not be tolerated in others. While everyone remembers “you can’t handle the truth,” the money line for us is “my existence, while grotesque and incomprehensible to you, saves lives” because it could be used just as easily to defend Incognito’s behavior today as Col. Jessup’s behavior in 1992.

What’s this all about? How can reasonable people be on both sides?

I believe that there is an underlying question about sports, that unanswered, explains why reasonable (some might say, otherwise reasonable) people can defend Incognito’s behavior. That question is “how much are professional sports just a job for the people who play them?” If sports are a job for athletes, then this behavior is not only unacceptable, it’s not controversial. We have clear rules and laws about workplace harassment, and since the days of Mad Men, our culture has been fairly uncompromising about enforcing those rules. If Incognito had done what he did to Martin in a shoe store or a law firm, he would have been fired by the end of the day. It is only if one thinks of sports as “more than a job” or the athletes as “grown men playing a child’s game” that it is possible to apply different codes of conduct to the controversy. I think you see evidence of this exceptionalism throughout much of what has been written about the case: the use of the word bullying or hazing instead of the more adult and professional words “harassment” or even “assault”; the consistent description of locker-room culture as some kind of club that people who have never been in cannot understand and which settles disputes only from within. You see this more generally in how people think and talk and write about sports: it’s a compliment to a player to say he or she would “play for free, (s)he just loves the sport so much;” fans disparage players who leave a team in free-agency “just for more money” elsewhere.

If playing professional sports is a profession then locker rooms are workplaces and Incognito’s behavior is indefensible. It is only through the underlying belief that sports are an exception that there can be any reasonable debate about the ethics of this situation. Just like with the medical treatment of players with concussions or the use of offensive words in team names, this incident is forcing sports to conform to the rules that govern the rest of the culture when it comes to issues of workplace harassment.