To prepare for the Winter Olympics in Sochi, Russia which begin on February 6, 2014, Dear Sports Fan is running a series of previews of Winter Olympics events. So far we’ve profiled the Luge, Skeleton, Bobsled, Ice Hockey, Cross-Country Skiing, Biathlon, and Alpine Skiing. 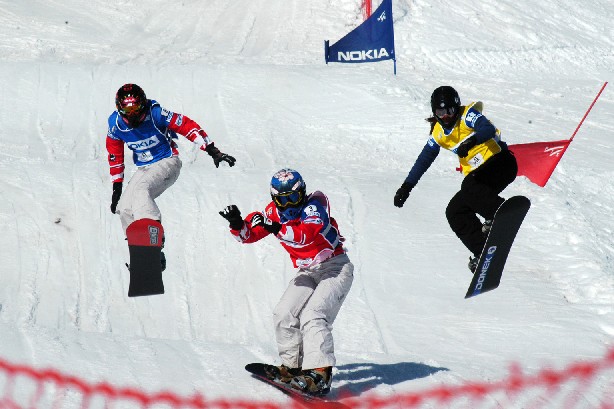 How Does Snowboarding Work?

Like Alpine Skiing, Snowboarding is a fairly common recreational pastime. According to Wikipedia, modern snowboarding began “when Sherman Poppen, an engineer in Muskegon, Michigan, invented a toy for his daughter by fastening two skis together and attaching a rope to one end so she would have some control as she stood on the board and glided downhill. Dubbed the “snurfer” (combining snow and surfer), the toy proved so popular among his daughter’s friends that Poppen licensed the idea to a manufacturer that sold about a million snurfers over the next decade.” Snowboards today don’t look exactly like surfboards but that’s still a good way to think about it. Snowboarders are fixed almost perpendicularly to their boards by their feet. This gives their movements a distinct forehand and backhand, something that skiers do not have.
Snowboarding can be a speed competition like the sledding sports and alpine skiing — whoever gets to the bottom first wins — or it can be a subjective contest like Figure Skating where points are awarded for completing difficult tricks and looking good doing it.
The gold medal run in Men’s Snowboard Cross from Turin 2006:
http://www.youtube.com/watch?v=FPxUcCTfFVk

What Are the Different Snowboarding Events?

Snowboarding has five medal events in the Olympics and they fall into three pretty different categories. Two that are similar are the Parallel Slalom and Parallel Giant Slalom. These are like the corresponding events in Alpine Skiing (Slalom has more, tighter gates to turn through than Giant Slalom — fastest one to the bottom wins) but with a wrinkle. They are called Parallel because two racers go down the mountain at a time, one on one course, one on a similar course right next to it. The two racers take a second run down the hill from the other course. On the second run, the racer who won the first run starts before their competitor by however much they were faster the first time. Whoever hits the bottom first the second time through, advances to the next round. Seeing how someone is doing compared to another snowboarder as opposed to just the clock with Alpine skiing, adds to the excitement and drama. The Snowboard Cross puts racers on the same exact course and lets them jockey for position on their way down a hill studded with jumps and twists and turns. Snowboard Cross has a lot of contact between snowboarders, so it’s not unheard of for a favorite to get knocked out of the competition because of a bad-break in a qualifying heat. The Slopestyle and the Halfpipe competitions round out the events and are similar to each other in that they are scored by human judges who reward people who complete the most difficult tricks at the farthest distance up from the ground. In the Halfpipe, these tricks are done by snowboarders who launch themselves into the air from one side of a U shaped tube built on the side of a mountain to the other. In Slopestyle tricks are done on the way down a “terrain park” course that includes jumps and rails to play off of.

How Dangerous is Snowboarding?

It’s definitely slower than Alpine skiing, so the Slalom and Giant Slalom are reasonably safe. Snowboarding itself is probably a little easier than skiing on the knees. Where the danger comes into snowboarding is twists and turns in mid-air that snowboarders attempt on the halfpipe and terrain park. Acrobatics fifteen feet above packed snow is no joke and coming down badly is no punchline. The Snowboard Cross has a ton of contact between riders and crashes are frequent but the speeds are usually not high enough to cause serious injury.

What’s the State of Gender Equality in Olympic Snowboarding?

Well, will you look at that — it’s perfect from what I can tell! There are ten medal events, five for men and five for women, and they’re the same five! I haven’t found any mention of any of the other inexplicable gender differences in rules found in other sports. Credit the newness of the sport or credit the laid-back attitude of the athletes but definitely give someone some credit!

What are Some Fun Olympic Snowboarding Stories?

Snowboarding has some outsized characters like its most famous champion, the “flying tomato,” Shaun White. White is joined by Canadian Mark McMorris who has his own MTV show and who won a silver medal in a recent X-Games event despite breaking a rib in the process.

Resistance is futile but it won’t stop some traditionalists from trying; or at least grouching about the popularity of snowboarding. Long-time announcer Bob Costas said of snowboarding, “this is just ‘Jackass’ stuff that they invented and called Olympic sports.”

The Snowboarding events begin on Feb. 6 and end on Feb. 22.

One thought on “Winter Olympics: All About Snowboarding”