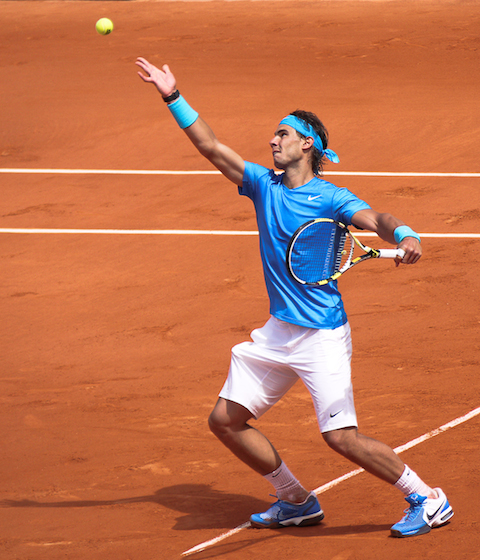 How do serves work in tennis? I’ve been watching the U.S. Open and the commentators seem to make a big deal over them. Why is that?

Great question — you’re absolutely right that tennis announcers make a big deal about serving but they don’t always explain how it works. I’ll take you quickly through how serves work in tennis, in particular, what the rules are and why they’re important to the game.

Visualize a tennis court. It’s split into two halves by the net. On each half there are three rectangles created by white lines. One big rectangle covers the half of the half farthest from the net. The area closest to the net is divided into two narrower rectangles. When a player serves the tennis ball, she has to stand outside of the boxed in area on either the right side of the court or the left. Serves from the right hand side have to cross the net in the air and bounce in the left hand small rectangle. Serves from the left hand side must do the opposite and land on the right side rectangle closest to the net on the opponents side of the court. Got it? It’s just like ping pong.

Although pros make serving look easy, it’s actually very difficult and lots of things can happen to a serve to make it illegal. This is so common that it’s not truly penalized like a foul, it’s called a fault. If a tennis player faults on his or her serve, they get a second chance. If they use their second chance to serve legally, the point goes on normally. If they fault again on the second attempt, they lose the point. The important terms here are first serve which is a player’s first attempt to start a point, second serve which is any serve preceded by a fault, and double fault which is when a serving player’s opponent gets a point because the server faulted two times in a single service attempt.

A fault can come for many reasons. The most common is that the serve fails to land in the correct opposite rectangle either because it gets stopped by the net or because it lands outside of the box. The only other reason I knew of off the top of my head was a “foot fault” which happens when a serving player steps on or over the baseline when they are serving. According to Wikipedia there are some other ways to fault on a serve but they don’t happen very often. One exception to the fault rule that does happen pretty often is when the ball hits the net but goes over and lands in the proper serving box. When this happens, it’s called a let and the serving player just gets a do-over. If they are on their first serve, they’re still on their first serve. If they are on their second, they are still on their second. If you’ve watched enough tennis, you’ve seen a player win a point because, in the normal course of play, they hit the net and the ball skips over and falls into their opponent’s side of the court. The player who won the point usually holds up their hands in a universal “I’m sorry, that was luck” gesture. It’s good sportsmanship but I think it may stem from this rule that establishes the idea that hitting the net shouldn’t be good for either player.

Serves are important because they carry a significant advantage to the player serving the ball. According to the ATP World Tennis Tour’s stats page the best player in the world at winning points when he makes his first serve legally is Ivo Karlovic and he wins 80% of those points. Why is that? Well, Karlovic has one of the fastest serves in the world. His fastest serve ever went 156 mph. Here’s a great video of him serving in slow motion:

The best men’s player in the world at winning points when he is not serving is Rafael Nadal who wins 35% of points even when his opponent’s first serve is legal. On second serves, players usually take a very safe approach to serving. They don’t serve as hard and they aim a little closer to the center of the service box than they do on their first attempt when they try to hit the lines. This reduces the impact of the serve. For example, the man who wins the highest percentage of his second serve points is Roger Federer at 58%. The player who wins the highest percentage of points returning a second serve is Rafael Nadal at 57%. Federer and Nadal are not coincidentally the best players in the world. Basically, a second serve means that the best player is likely to win the point. A first serve is a strong enough weapon that it can override a big skill difference.

This is why tennis matches are so often won when a player wins a game that they are not serving. Because the serve is such an important advantage, players expect to win games they serve. Winning a game when a player doesn’t have the serve is called a break. Without any breaks, a tennis match could theoretically go on forever. American giant (6’10”) tennis player, John Isner, is the closest person to making this a reality. He’s almost unbeatable when he serves — he wins 93% of those games — but can barely ever (9%) seem to break his opponent. It’s no coincidence that he once played in the longest match ever against Nicolas Mahut at 2010 Wimbledon. The match lasted over 11 hours although it did stretch across three days because of rain and darkness.

There you go — probably more about the serve than you bargained for. Hope you enjoyed it,
Ezra Fischer