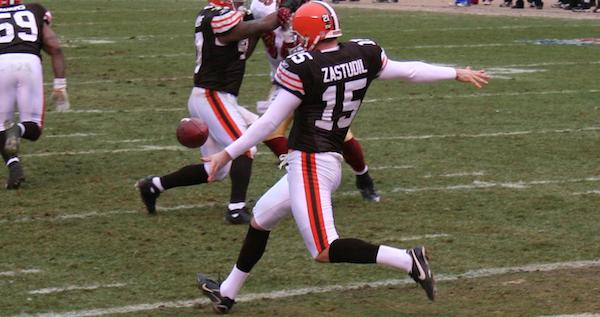 How do punts work in football?

The punt is a unique and important play in football. Punting is the most common way that possession moves from one team to the other. As such, it’s a transitional moment, and like many transitional moments, it’s fascinating because it has so many different possible outcomes.

To understand the punt, it’s important to have a quick refresher on how downs work in football. In the National Football League, whenever a team has the ball, they have four downs or attempts to move the ball ten yards. Thus, first down and ten means they are on their first chance of four to move the ball ten yards. If they run the ball two yards on their first try, the next down will be called second down and eight (to go). If they try four times and don’t travel ten yards, the other team will get the ball wherever the first team had it when they failed to get those last yards. Instead of allowing that to happen, a team can (and often does) choose to kick the ball. If they are close enough to their opponent’s end-zone, teams will usually try a field goal (kick the ball between the uprights, get three points.) If not, they usually make the decision to punt the ball.

When a team lines up on fourth down to punt the ball, instead of a quarterback behind the center, there’s a specialist player called the punter back there. Being a punter in the NFL is pretty awesome. Last year, punters in the NFL made between $495,000 and $3,250,000! It’s a nice job, but there are only 32 of them around. Punters don’t have quite the pressure on them that field goal kickers do but, like their field goal kicking brethren, they rarely get hit. The punters job is to stand about fifteen yards behind the line of scrimmage, catch the snap that comes spiraling back to him, and then punt the ball.

Lots of things can happen once a team begins to punt:

Football is all about technicalities, isn’t it? They’re more fun when you understand them. Tomorrow, we’ll take a look at how punts can be exciting for each team.