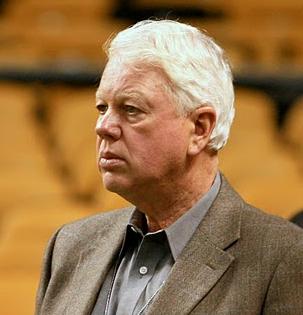 What? You think it’s too early to start shopping for Christmas? I agree with you but it’s not what some of my local stores think because they’re already gearing up for the rush. I say, skip the stores and buy the sports fan in your life the new autobiographical book, Scribe: My Life in Sports,

by Bob Ryan. Bob Ryan is one of the best known and most respected sports writers in the country. He started as an intern at the Boston Globe in 1968 and retired from full-time work there in 2012 after 44 years as a beat writer and columnist. He is a Boston sports writer, through and through — never bothering to adopt the feigned objective neutrality of many journalists in sports. When asked about that in a recent interview by Ryan Glasspiegel of The Big Lead, Ryan said:

I don’t see why anybody would ever have a problem with it. If you’re not a sports fan, why are you in the business? To me, I don’t quite understand people who aren’t true sports fans who are involved in this business.

I haven’t read Scribe yet — it just came out — but I’ve enjoyed reading Ryan over the years as well as seeing him on TV as a panelist on the Sports Reporters, Around the Horn, and as a substitute host on Pardon the Interruption. He’s one of my favorite guests on the Tony Kornheiser radio show. Ryan is the most enthusiastic and knowledgeable sports personality out there. The Boston Globe review of Scribe noted that writing autobiographically, Ryan “offers a bonus: a reflective humor that can only come from years of working at a job you love.” I believe it!

It’s been quite enjoyable to have the publication of Ryan’s book as an excuse for a real Ryan love-fest in sports media. My favorite article about Ryan was Bryan Curtis‘ homage in Grantland. His reverential tone serves to lift your own appreciation of Ryan as a writer and person. One of the effective tools he uses is including quotes about Ryan from athletes. For those of you who don’t follow sports that closely, athletes generally consider journalists to be a form of life somewhere between the mosquito and the raccoon. Bob Ryan is an exception:

The players followed Ryan, too. “He was an artist,” said guard Paul Westphal. “You could actually learn something about basketball, even as a player, by reading Bob’s articles.”

“I remember Bob coming up to me one day and asking if I wanted to have a beer after practice. I said, ‘Sure.’ We were just talking, and then Bob starts describing what we were doing on the court. He knew all our plays. He knew when people came off the bench. I was a rookie, remember. I started thinking, Do all the reporters know everything we’re doing out there?”

Scribe: My Life in Sports is available in hardcover and kindle now. It would make a great Christmas present for the sports fans in your life… and apparently, it’s time to think about that sort of thing!