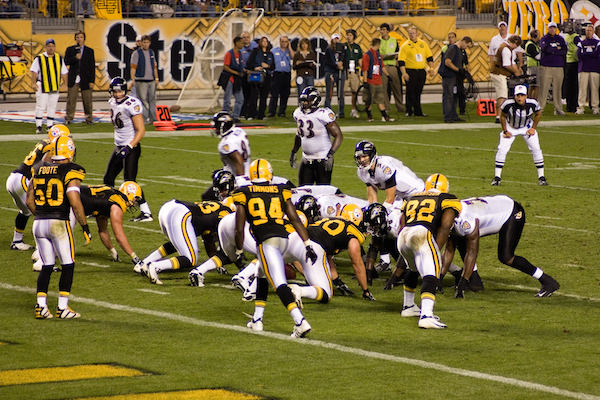 Something funny happened yesterday in the Giants vs. Cowboys game. Or at least, the football fans I was hanging out with thought it was hysterical. The Cowboys quarterback shouted that one of the Giants players was the “Mike” and the Giants player yelled back that he wasn’t the Mike. I get that it’s funny for opposing players to be having a dialog on the field but I don’t know what they were talking about. What is identifying the Mike linebacker in football?

I saw that video too! It was pretty funny. Here’s the video for everyone to watch. After you give it another watch, I’ll explain what the quarterback was doing and why. After that, I’ll attempt the always dangerous explanation of why something was funny.

The name “Mike” is common football short-hand for the person playing the middle linebacker position. We’ve got a detailed post on linebackers and their specific positions within the most common defensive formations, so I won’t go into too much detail here. Suffice it to say that in a standard, vanilla defensive formation, there are often three linebackers on the field lined up behind four defensive linemen. The linemen are the big dudes who line up with their hands on the ground opposite their behemoth counterparts on the offensive line. The linebackers line up behind the defensive line, standing up, where they are in great position to tackle a running back, cover a wide-receiver, or sprint up to try to hit the quarterback. The three linebackers positions in this standard 4-3 formation are not called left, middle, and right, they’re called weak, middle, and strong. (Quick detour — the strong side is the side with more offensive players lined up on the line of scrimmage — linemen and tight ends, the weak side is the one with fewer players, usually just two.) These positions have nicknames: Will, Mike, and Sam which correspond with Weak, Middle, and Strong. (It hasn’t always been Will, Mike, and Sam. Back in 1959, the Giants coaches used the names Wanda, Meg, and Sara.) When a quarterback screams a defender’s number before the start of a play or points at him, he’s identifying the Mike or middle linebacker.

On passing plays, somewhere between five and eight of a quarterback’s teammates are responsible for keeping the quarterback safe by blocking defenders who are trying to tackle him from getting near enough to him to do that. The plan for how to do this is called a blocking scheme. Blocking schemes are about as complicated as the choreography of a ballet and at least as opaque to outsiders. Let’s pretend for our purposes though, that they’re pretty simple. Let’s say that the five offensive linemen are going to block, one-on-one, one member of the opposing defense. They’ll move as one unit of five players to block five defenders. They just need to be aimed. When the quarterback calls out the Mike, he’s centering the blocking scheme. He’s ordering the offensive line to center themselves on that player and then block accordingly. If the quarterback calls out someone lined up far to the right as the Mike, the offensive line will aim themselves to the right, the center blocking the Mike, the guards blocking the defenders lined up to either side of him, and the tackles blocking the defenders two people on either side of the Mike. If the Mike is to the left, the line will aim itself to the left. If the Mike is actually in the center of the field, like in the video above, the line will be centered.

So, what’s so funny about the video of Jameel McClain loudly denying Tony Romo’s declaration of his being the Mike? Well, for one thing, it’s funny because the Cowboys have no reason to believe anything McClain is saying. McClain’s profession is to help win football games. Why would he help the opposition? It’s like a poker player interrupting the deliberations of an opponent at the table by saying, “don’t worry about calling my bet, I only have a pair of twos.” McClain’s position is so unbelievable that saying he’s not the Mike is not even a good form of misinformation, it’s just silly. If you really want to get comedy and football nerdy at the same time, you might argue that the funniest thing about McClain screaming that he wasn’t the Mike is that it could be interpreted as a deliberate misunderstanding of the two meanings of Mike: relative and absolute. You could argue that McClain was interpreting Romo’s declaration that for the purposes of the Cowboys’ blocking scheme, Romo wanted his team to interpret McClain as the relative Mike (center of the blocking scheme) and answering honestly that he wasn’t the center of the defensive scheme or the absolute Mike. When everyone can tell the truth and successfully communicate nothing to anyone… that’s funny.