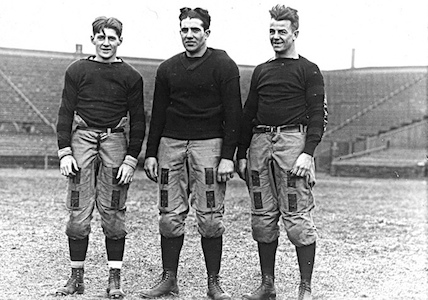 On Mondays during in the fall, the conversation is so dominated by NFL football that the expression “Monday morning quarterback” has entered the vernacular. The phrase is defined by Google as “a person who passes judgment on and criticizes something after the event.” With the popularity of fantasy football, we now have Monday morning quarterbacks talking about football from two different perspectives. We want you to be able to participate in this great tradition, so all fall we’ll be running NFL One Liners on Monday. Use these tiny synopses throughout the day:

You don’t necessarily need to have two great teams to get an entertaining football game. This game proved that point with a last second touchdown which pushed the home team to a victory.
Line: Not great teams but a great game.

Oh Cleveland. After so many years of being bad, you were so impressive through your first five games of the season. You played hard and were competitive in every single game. You seemed so far from the lousy Jaguars who had lost every game they’d played. Oh Cleveland.
Line: Welp, there go the Browns again.

After struggling at the start of the season, Packers quarterback Aaron Rodgers went on local sports talk radio and told the Packer fans to relax. Four straight victories later, if Wisconsin gets any more relaxed, we could have a serious cheddar shortage on our hands.
Line: Guess Rodgers knew what he was talking about when he told the fans to relax, huh?

The Bears have now lost three of their last four games and they’re officially entering soap-opera territory. There was, apparently, a big kerfluffle in the locker room after the game with Bears blaming each other at high decibels.
Line: The Bears are falling apart.

You could say the Bengals are falling apart but I think it’s more likely that they are being revealed. Their three early wins came against the Ravens, Falcons, and Titans. Since there were so few 3-0 teams this year, that made people think the Bengals were really good. Now that we know a little more about the Falcons and Titans (that they’re not so good), those wins don’t look so impressive.
Line: The Bengals aren’t falling apart, they’re just not good.

I was totally convinced that the Saints would win this game. In past years, when the Saints have been a reliably very good team and the Lions have reliably fallen apart at the least provocation, they would have. This year, the Lions are made of firmer stuff.
Line: The Lions are for real this year.

Stop the presses! The defending champion Seahawks have lost two games in a row! Actually, it’s okay, start them again. The Rams are sneaky good even though they don’t win that much.
Line: The Seahawks will be fine.

Washington went to their third quarterback on the year and still beat the Titans who were, admittedly, on their second string quarterback themselves. All in all, not a game to be remembered by anyone involved.
Line: Meeeehhhh.

We’re entering the part of the season where some games just mean a lot more to one team than their opponent. At 2-3, the Chiefs needed to win this game a lot more than the 5-1 Chargers. Sometimes that is the difference between two teams close in talent.
Line: The Chiefs just needed this one more than the Chargers.

The Giants hung around and made it competitive but the Cowboys proved that you should never challenge a Texan when football is on the line.
Line: It’s a change to be able to use the cliche “How about them Cowboys” and not just get resigned shaking heads.

With the Jaguars beating the Browns, I think that makes the Raiders the only team left that hasn’t won a game. Losing to the Cardinals is nothing to be ashamed of though, Arizona is 5-1 and it looks like they deserve that record.
Line: The Raiders will eventually win a game but probably not against Arizona.

Peyton Manning, quarterback of the Broncos, set the NFL record for all-time touchdown passes thrown during this game. His team knew he was only three touchdown passes away from the record when they started the game and they seemed hell-bent to make sure he broke the record at home, on national TV. The 49ers never looked like they had a chance.
Line: The Broncos really wanted Manning to break the record last night and they made sure he did. Winning the game went along with that.