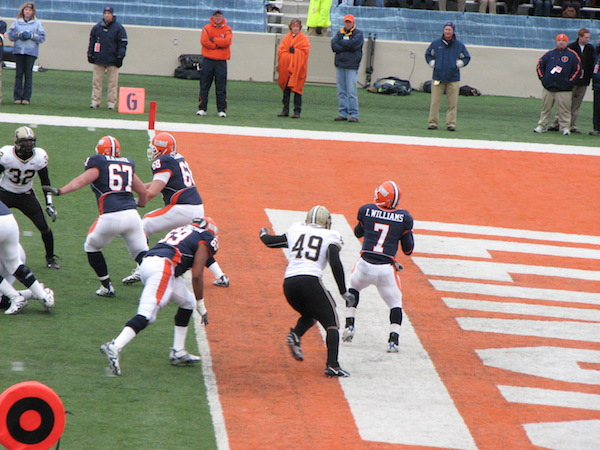 What is a blitz in football? I get that it’s something the defense does to attack the quarterback but I’m not sure exactly what it is.

This is an easy question! A blintz is a thin rolled pancake filled with fruit or cream and then cooked. What? Oh, a blitz, not a blintz? Shucks, that one isn’t so easy. Blitz is a word that football took from military history, where it meant a rapid attack. The German bombing of London during World War Two is called The Blitz. Despite being an incredibly common football term, the word blitz is hard to define. It’s been used and reused in so many different ways that its actual meaning has been blurred almost completely. I think it’s safe to say that a blitz is a defensive strategy that relies on speed and surprise to attack the quarterback that aims to tackle him before he can throw the ball or, failing that, to disrupt him enough that his throw is unsuccessful. That’s a more general meaning than most of the definitions that are given but most of the specific definitions given are contradictory. Let’s run through some of them:

Eventually, if you probe a football fan deep enough, he or she will probably say something like, “quit bothering me, I know a blitz when I see it.” I suspect that there is a technical definition of blitz used within football teams that still has a very specific meaning although it could be used differently from team to team. I also think there probably was once, at the start of the use of the term, a specific definition. The Wikipedia article on the blitz claims that the term was originally used to refer only to a team rushing seven men at the quarterback. Rushing six was called a “red-dog” after a linebacker named Donald Nesbit “Red Dog” Ettinger who played for the University of Kansas, the New York Giants, and in the Canadian Football League. Great nickname! This has the ring of truth to me. It fits most of our descriptions. If you rush seven men, you’re absolutely using a player who is not a defensive lineman because there are at most five of those, you’re likely to be blitzing with more men than are protecting the quarterback, and you’re by definition sending more than four rushers.

So, if you want to be a stickler the next time you’re watching football with a bunch of friends, correct them when they shout about their team blitzing. Tell them that wasn’t a blitz, it was a red-dog! Then duck the plate of hot wings that’s inevitably going to come flying at your face.

Wish I could be more definitive, but this is what I’ve got,
Ezra Fischer

One thought on “What is a blitz in football?”