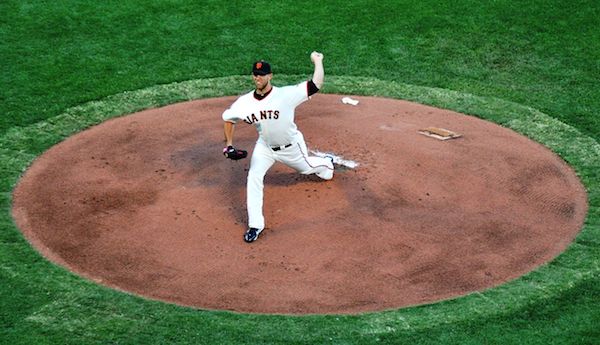 I watched the World Series last night. The announcers kept saying how unusual it was for Madison Bumgarner to be pitching so well and so much after starting a game a few days ago. What’s up with that? Why can’t pitchers pitch more than once every five days?

Last night, San Francisco Giants pitcher Madison Bumgarner pitched five scoreless innings to drag his team to a World Series Championship. His performance is being lauded far and wide as the best thing since sliced bread and the bravest thing since Charles Sullenberger landed his plane safely in the Hudson River. Just check out some of what people are writing about Bumgarner’s performance last night:

“What Madison Bumgarner just did is supposed to be impossible.” – Deadspin

“He’s not human. We gotta do something about this guy. We gotta take him to the doctor, I guess. I don’t know. It seems like he is a robot.” – teammate Gregor Blanco, as told to Sports Illustrated

“I’ve seen a lot of great pitching performances. What Madison Bumgarner did over the last 72 hours is unlike anything I’ve seen. Incredible.” – sports columnist Jeff Passan on Twitter

It was clear, even to a novice baseball fan, that Bumgarner pitched wonderfully last night, but what isn’t as clear is why his performance was seen as being so inhuman and heroic. This is because starting pitchers normally can’t pitch more than once every five days. In order to properly appreciate Bumgarner’s performance, it’s useful to understand a little bit about why that is. It seems like throwing a ball shouldn’t be something you can only do once every five days, but that seems to be the case. Why is that?

Here’s the important thing to understand. Pitchers don’t throw the ball. That’s what you or I do. Pitchers throw their arms. This is why it’s so damaging to their bodies that they can only safely and successfully do it once every five days. Pitchers don’t generate force with their arms, they generate force with their legs and hips and torsos and use their arm as a lever and guiding mechanism. This means that their arms are subjected to however much force their bodies can generate. Bodies can generate a lot of force. Way more than arms can. Arms however, aren’t really evolved to handle that much force. What ends up happening is a little bit like what happens if you try to use a plastic knife to open a can of paint instead of one of those little metal keys or, if you’re like me, a screw driver. Here are a couple facts about the force pitchers generate from a Popular Mechanics article on the topic by Jeremy Repanich:

When a pitcher cocks his arm, where it is turned back to the point where the palm is facing toward the sky, there’s about 100 Newton-meters of torque on the arm, which subjects the arm to the same amount of stress as if the pitcher had a 60-pound weight hanging from his hand in that position… From that cocked position, the arm snaps forward to its release point in 0.03 seconds, and at its peak speed, an elite pitcher’s arm rotates at upward of 8500 degrees per second.

A baseball team uses its pitchers like medieval armies used those rock flinging machines, the trebuchets. Seriously. Compare the motion of these two hurling entities.

It’s impressive but also a little scary. Going back to Repanich’s article, here’s what he has to say about pitchers who pitch close to 100 miles per hour:

The amount of torque needed to throw in excess of the century mark is greater than the amount of force the ulnar collateral ligament (the elbow ligament Strasburg tore) can withstand before giving out, according to tests Fleisig has done on cadavers.

Indeed, pitchers injure themselves frequently. The amount of force they use in their pitching motion tears things in their elbows and shoulders. Every pitch they throw strains their arms a little more, pulling and stretching ligaments to their limits and beyond. The more they pitch, the more likely they are to injure themselves. Starting pitchers may pitch up to around 120 times in a game. After a game, they do everything they can to heal the damage done during the game. They ice, they rest, and they wrap, they probably do all sorts of other stuff too that we don’t know about and maybe don’t really want to know about.

What Madison Bumgarner did by pitching perfectly on two days rest was prove that he could will his body to perform when it shouldn’t have been able to or prove that his body is unlike everyone else’s. Either way, it was pretty impressive.