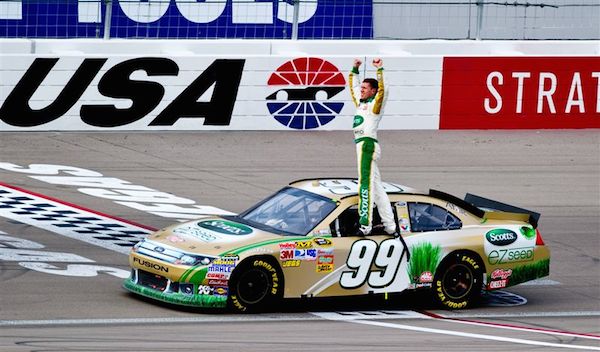 I read your Cue Cards series every morning faithfully. This morning you admitted that you didn’t really understand how the NASCAR championships work. Isn’t that your job? Figure it out!

Get on it,
Arturo

You’re right, it’s unforgivable. I should know how the NASCAR championships work! So, I did some research and figured it out. It’s an interesting model. Here’s how it works:

There are 36 races in a NASCAR season. Of these, the final ten are part of the NASCAR championship series, called the Chase for the Sprint Cup. In some ways, these final ten races are just like the first 26 races in the season. Each is its own event with its own results and prize money. For example, the Goody’s Headache Relief Shot 500, run on Sunday, October 26, 2014 had a total purse of $5,036,108 that went out to the forty-three drivers who competed in the race. During the final ten races though, there is another set of standings and results super-imposed on top of the normal race results. This extra structure is the Chase for the Sprint Cup.

The Chase for the Sprint Cup begins with 16 competitors and slowly reduces the field to four before crowning a champion in one final race. The first round consists of three races and is called the Challenger Round. After those three races, four drivers are eliminated and the next round begins. The next round is called the Contender Round, also consists of three races, and has twelve competitors. Once the three races are done, another four drivers fall out and only eight remain. The eight compete in the Eliminator Round, also over the course of three races. The final cut happens and the field is reduced to four drivers for the Championship round which is a single race.

The sixteen driver field is initially chosen based on the results of the first 26 races in the season. Drivers in these “regular season” races are assigned points at the end of the race based on what place they finished the race and whether or not they led during the race. The racers with the most wins in the first 26 races will be given spots in the sixteen driver Chase field. If there are more than 16 winners (which almost never happens,) the winners with the most points will qualify. If there are fewer than 16 winners (because some drivers won a lot of the first 26 races) then the field will be filled in order of the points standings among non-winners. It’s a little convoluted, but basically the best 16 drivers from the first 26 races qualify for the Chase for the Sprint Cup. Before the Chase starts, the 16 qualifiers are assigned points based again on regular season wins. Every driver is given 2,000 points plus three points for every regular season win. This year, the standings at the beginning of the Chase looked like this with Brad Keselowski in first place with 2012 points and a three-way tie between drivers 14-16 who all qualified without having won a single race that season.

At the end of each round until the Championship round, the winners of the three races in the round (note that because each race has the normal complement of 43 drivers, there may not be three eligible winners) automatically advance to the next round and the rest of the available slots are filled in order of how many points they accumulated during the round. At the beginning of each round, the points are reset, so each driver that survives the cut has an equal shot to win the next round. There are no cumulative standings. The final Championship round takes place during a single race at the Homestead-Miami Speedway on November 16, 2014. Of the four remaining drivers, whoever places higher in that race wins the overall Chase for the Sprint Cup.

There are so many things about this format that are interesting. First of all, the idea of having a race within a race — a set of drivers within a field of 43 who care more about beating each other than winning the race is curious. How does that impact the tactics of the race itself? It’s tempting to want to see just the sixteen, twelve, eight, or four drivers still alive for the championships race alone on a track but racing with so few cars on the track probably alters the sport enough to make it unfitting for a playoffs. Still, it’s strange to think of a driver other than one in the final four winning at Homestead-Miami. Then you’ll have two separate victory celebrations happening simultaneously at the end of the race. The Chase for the Sprint Cup is an evolutionary approach by NASCAR to trying to maintain the one-day excitement of their sport while creating the week-to-week suspended drama of a playoffs.

I learned a lot — I hope you did too,
Ezra Fischer