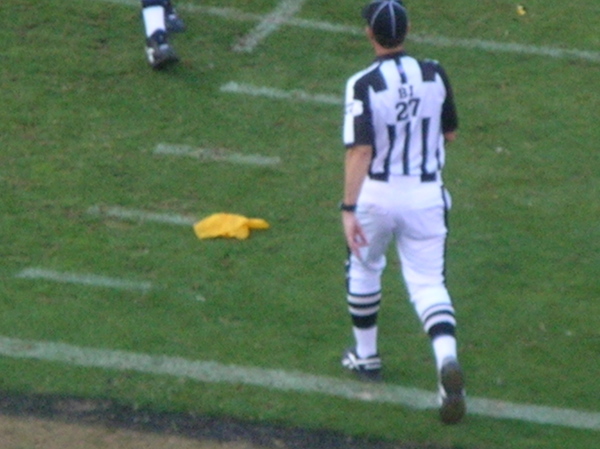 One of the visually appealing elements of football is the way that fouls are signaled by the sports many referees. When a referee sees an infraction of the rules, they don’t necessarily blow whistles or make arm gestures like in other sports, instead, they reach to their belts, grab the small yellow flags they have tucked into their pants, and throw them onto the field. The gently arcing yellow flag is such a perfect visual expression of the emotion a foul call can create in players and fans. When you suspect the penalty is on the team you’re rooting for, the fluttering of the flag seems to happen in the slow motion of a horror movie. When you think the penalty is going to save your team’s bacon, the flight of the flag speaks of a desperately desired deliverance. What could be better?

Kirk Goldsberry of Grantland thinks it would be better if you knew right away which team the penalty was on. The problem, as he explains it, is that seeing a yellow flag “leaves a strange interval between the time a flag is thrown and the time that the charges are explained.” Players and fans know that a foul has been called but they don’t know which team the foul is on. Goldsberry things that “In the information age, this “flag lag” is one of the most annoying parts of the whole football experience. And it’s unnecessary.” His solution is an appealingly simple one:

Football needs two different colored penalty flags — one color for offensive infractions and a separate color for defensive ones…. [that way,] spectators, announcers, players, and coaches would all immediately recognize the guilty side, and consequently their emotions wouldn’t be held hostage by some unneeded informational embargo.

I love this idea! The NFL should absolutely do this. After all, it wouldn’t be the first time penalty flags have been tweaked. They were colored white in the NFL until 1965 and red in college football until the 1970s. Following a semi-tragic eye injury suffered by offensive lineman Orlando Brown (nicknamed Zeus, he died in 2011 at the age of 40,) NFL refs stopped weighting the flags down with BBs or ball bearings. Moving to a two color flag system would be a small but positive change that serves fans and players alike.

If you want to learn the basics of football in time for this year’s Super Bowl, sign up for our Football 101 course. It’s the easiest way to learn football, and I promise that by the time you’re through, you’ll be able to impress the football fan in your life with your newfound knowledge.

In this free course, you’ll learn all about why people like football, what down and distance are, how football scoring works, the inside scoop on fantasy football and football betting, how to decipher TV scoreboard graphics, and finally my favorite way to start having fun while watching football. At the end of the course you will get a fully unaccredited diploma of graduation, which you can hang on your wall with pride. If you enjoy the course, (and I hope you do!), I’d be thrilled to have you as a regular subscriber to our daily or weekly digests and for Football 201, coming soon!