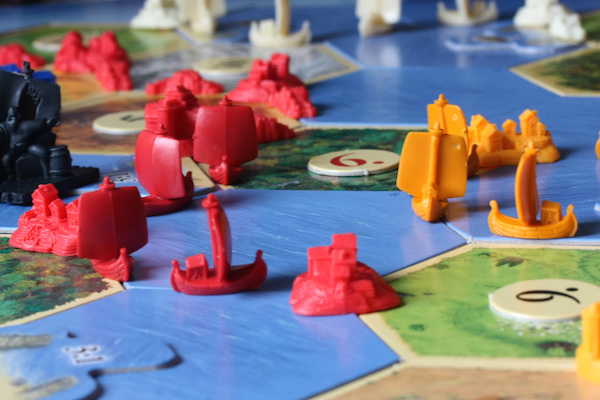 Kevin Clark wrote an article for the Wall Street Journal this week where he describes, with some glee, how the board game Settlers of Catan has become an obsession of some members of the Green Bay Packers football team this season. The article has gone viral. It’s the number one trending topic on Facebook, which tempts users to click on it with the teaser, “Green Bay Packers’ players ‘completely addicted’ to board game, tight end says.” The article is currently the number one search result on Google’s web search for “Settlers of Catan” and also for “Wall Street Journal.” It’s number one on the Wall Street Journal’s self-reported Most Popular articles right now too. The article clearly struck a nerve.

Wikipedia describes Settlers of Catan as a multi-player board game where “players assume the roles of settlers, each attempting to build and develop holdings while trading and acquiring resources. Players are rewarded points as their settlements grow; the first to reach a set number of points is the winner.” Green Bay Packer’s backup quarterback Matt Flynn is quoted in Clark’s article describing the game as “a nonviolent version of Risk.” The Green Bay Packers, especially their offensive line, love it and seem to approach it with a competitive zeal close to that they show for football. Here’s Clark:

The competitive nature of the Green Bay’s Catan tradition is now legendary in the locker room. Two weeks ago, Linsley won the game, but Bakhtiari, who typically hosts the games at his house, had briefly gone outside to cook a chicken for the group. He furiously protested Linsley’s victory because of this.

If one half of the appeal of the article is the humor in a group of grown men taking a board game too seriously, the other half seems to be pointing out that it’s funny for football players to play a game that is as intellectual and intricate as Settlers of Catan. That’s a theme the article hits from start to finish:

There may not be a more unusual bonding tradition in the NFL than the gang of Packers who get together regularly to play a board game called “Settlers of Catan.”

Any player in the locker room will readily admit that it’s a nerdy endeavor.

“The rules of the game can be complex—making it all the funnier that the Packers have embraced it.”

The Packers’ embrace of the game become such a phenomenon that [a local gaming store, Gnome Games] put a sign up that said “Be cool like [Packers tight end] Justin Perillo, play Catan!” The Packer players quickly noticed it. “We thought it was hilarious,” Linsley said.

The message is clear: it’s funny for football players to play a Settlers of Catan because football is cool but not very intellectual and Settlers of Catan is intellectual but not very cool. I believe that the article has been viewed and forwarded and shared and tweeted so many times primarily because of the perceived incongruity of football players spending their leisure time in an activity that’s so unlike football.

I don’t blame Clark one bit for taking this approach. Not only is this a “don’t hate the player, hate the game” moment but I enjoyed the article. It was well written and it made me want to hang out with the Green Bay Packers. What bothers me is the underlying assumption about football not being an intellectual pursuit. A big part of my rationale for writing Dear Sports Fan is that I don’t believe the gap between sports and non-sport activities is as great as many people think it is and I don’t believe there should be as large a divide between sports fans and non-sports fans as there is. This article and the response to it widens the cultural divide over sports ever so slightly by encouraging people to think it’s unusual and funny for football players to play an intellectual board game like Settlers of Catan.

Football is an incredibly complex game that requires not only amazing physical feats from its players but also remarkable mental acuity. Every player is expected to learn (simple memorization will fail when decisions need to be made so quickly and under such intense pressure) up to a thousand plays in their own time using mostly diagrams. Then, when a play is called in the middle of a football game, they have to recall what they and at least what their neighboring teammates do to execute the play. And it’s not like the play names help very much. Football language is as obtuse as diner short-hand and each team has their own language. Here’s an example of a play call as described by Kansas City quarterback Alex Smith in a Kansas City Star article:

“There’s times I’m in the huddle and I might go, ‘Alright, listen up for the call here fellas,’ and they know it’s gonna be a doozy,” Smith said. “We’ve got ‘shift to halfback twin right open, swap 72 all-go special halfback shallow cross wide open.’”

Understanding a play call is just the start. NFL football players need to be tuned into the exact situation within each game and have an encyclopedic understanding of their opponents. Nowhere is this more true than in New England, where the Patriots head coach Bill Belichick terrorizes his team with his own perfect recall and penchant for impromptu pop quizzes. You know how I know this? Another article by Kevin Clark (and Daniel Barbarisi) in the Wall Street Journal! Here’s an excerpt from that piece:

“According to players, if a younger member of the team offers an answer, Belichick will often ask a studious veteran if that player is correct. Evans particularly remembers Belichick doing this with star quarterback Tom Brady and then-backup Matt Cassel. As Evans tells it, Belichick would ask a detailed question: “Hey, we’re in the high red zone, it’s second-and-six from the 18. What’s Indianapolis’ favorite blitz?” Cassel would answer “overloading the weak side.” Then Belichick would turn to Brady and ask “do you concur?” On the times Brady said the backup was incorrect, the room would erupt with laughter.”

I don’t mean to be a kill-joy. There is something instinctively unexpected about 350 pound world-class athletes sitting down to play Settlers of Catan. Kevin Clark’s Wall Street Journal article captured that humor with grace and not a trace of meanness. The problem is that the article and our enjoyment of it furthers some unnecessary and damaging misconceptions about the nature of sports, sports fans, and athletes. The Green Bay Packers compete in a high-stakes workplace with intense physical and mental demands. Is it really surprising that some of them keep themselves primed intellectually and competitively by playing an brainy board game?