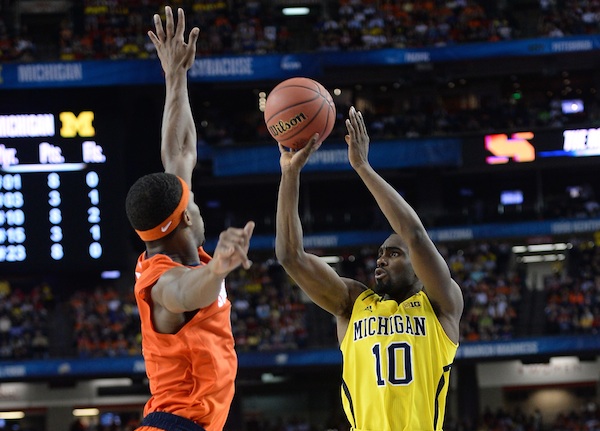 To help prepare you to fill out a bracket this year, we thought we would explain some common, uncommon, serious, and frivolous ways to fill one out. So far we’ve covered chalk. Now we’ll take a look at filling out a bracket by telling a story.

During the lead-up into this year’s Super Bowl (stick with me, this will make sense) I listened to Grantland’s NFL Podcast featuring two writers from the website, Bill Barnwell and Robert Mays. One of their podcasts covered some of the many prop (or proposition) bets that you could make before the big game. These are bets about various things that may happen during the game, like will a particular wide receiver catch more than seven passes or will a quarterback throw more than three touchdown passes or who the game’s Most Valuable Player will be. I’ve enjoyed making bets like this (never for real money though, only for fun) in the past but I’d always thought of each bet as an isolated question. Mays and Barnwell suggested that the best way of making prop bets is to tell a story about what you think is going to happen in the game and then follow it through. If you think one team is going to win by running the ball a lot then maybe you should pick that team’s running back to be the MVP and bet on a lower score since games with a lot of running are usually lower scoring. This idea of telling a story made a lot of sense to me and it can be applied equally well to filling out a March Madness bracket. Think about the tournament as a single entity instead of a group of individual games and then tell a story about it that makes sense to you. Pick the games based on that story. Here are a few suggestions of stories that you might think about telling.

Tell a story about height

If you’ve ever played basketball, even in gym class, you know it’s helpful to be tall. One story you could easily tell about this year’s tournament is that it will be a triumph of height over everything else. This is particularly easy to imagine because the best overall team in the country, the undefeated Kentucky Wildcats, is unusually tall. In addition to Kentucky, other very tall teams are Maryland, Wisconsin, Iowa, and UC-Irvine.

Tell a story about age

Each year, many of the best players in college basketball are freshman in college. This is because the NBA, the best professional option for basketball players, does not allow its teams to hire players until a year after they graduate from college. Most of the best players in the United States decide to do one year of college and then enter the NBA draft. Teams like Kentucky, Duke, and Kansas, all among the favorites to win the NCAA Tournament, are also among the youngest teams in the country. You can go either way on this one — tell a story about older teams showing the young punks what basketball is all about and take Gonzaga, Wisconsin, or Villanova to win it all. Or go with talent over experience and choose Kentucky, Kansas, or Duke. Use the handy charts on Stat Sheet as your guide.

Tell a story about conferences

One of the fun things about college basketball is that many of the teams playing each other during March Madness will have never played each other before, at least not this year. There are so many college basketball teams and most of the time during the regular season, teams play other teams within their conference. In order to rank teams from 1-16 in each of the four regions, the selection committee has to make a bunch of assumptions about the relative strength of each conference. Sometimes, they get it wrong. If you think a conference was better than the selection committee thought it was, err on the side of choosing those teams to win games. This year, the Big 12 and Big Ten each got seven teams into the tournament followed by the ACC and Big East with six each, and then the SEC with five and PAC-12 with four. Choose one of those conferences to hate on. Choose another to celebrate. Guide your choices based on conference biases and you’ll create an interesting bracket.

Tell a story about getting hot

Last year, the University of Connecticut men’s basketball team won March Madness as a seven seed, the first time a seven seed had ever won the championship. What happened? They got hot at the right time and were able to take the momentum they built during a run to the AAC conference championship final and build on it through the early rounds of the NCAA tournament. By the time they got to the final four, they were an unstoppable force firing on all cylinders. Now, there’s all sorts of articles out there debunking the idea that momentum in sports exists during a single game, much less across a multi-week tournament. That said, you could do worse than to look at which teams won or were runners-up of their conference tournaments, especially in the top five or six conferences. Pick teams that have shown recently that they know how to play under pressure.

Tell a story about pace

Pace is a statistic that expresses the number of possessions a team has during a game. It’s reflective of their style of play. College basketball, because it has a longer shot clock than the NBA (35 seconds rather than 24) has a much more varied pace landscape than professional basketball. Even at the very top of the tournament, among the one and two seeds, there’s a wide variety. Wisconsin and Virginia are two of the slowest teams in the country. They win by playing smothering defense and scoring just a little bit more than the other team. Kansas, Arizona, and Duke are the fastest playing teams of the top eight, although they pale in comparison to the lightning fast LSU and BYU teams. If you love high-paced basketball, make your viewing over the next couple weeks more fun and favor the fast teams. If you love defense, you have some great options to go with as well.