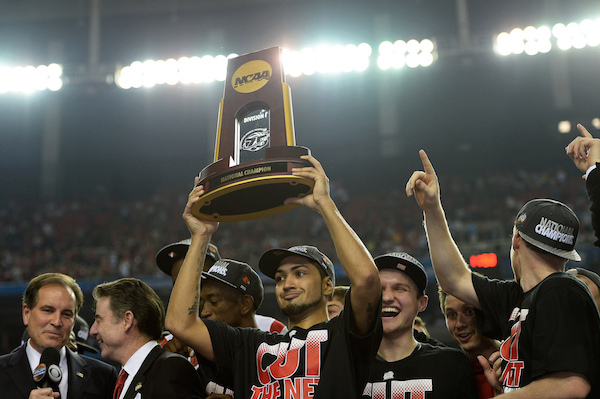 To help prepare you to fill out a bracket this year, we thought we would explain some common, uncommon, serious, and frivolous ways to fill one out. So far we’ve covered chalk, telling a story, and the frivolous approach. Now we’ll take a look at filling out a bracket in the way that gives you the best chance of winning — by letting someone else do the work.

Open up Ken Pomeroy’s 2015 College Basketball Rankings or Ed Feng’s The Power Rank or Jeff Sagarin’s Pure Points Predictor. Take a look at their rankings and see which one you prefer. Keep it open in one tab and your bracket in another. Run through the games and choose a winner based on Pomeroy, Feng, or Sagarin regardless of the seeds. Keep it up all the way through the tournament with one possible exception. This year the overwhelming favorite is Kentucky. The Kentucky team is undefeated and first in all three of these rankings. You have to decide what you want to do about that. Because of the way brackets work, choosing Kentucky to win will put you in with the majority of the people you’re competing against. If you do this, you’re relying on getting more of the other games right than anyone else. The alternative is to pick another team to win the whole thing. If you do this and they win, you’ll have a much smaller pool of people who have also taken that team. Normally, I would say to avoid the overall favorite but Kentucky is such an overwhelming favorite (although Nate Silver still says they only have a 40% chance of winning) that I can’t fault you for wanting to take them.

Here’s the cool thing about relying on someone else’s rankings. By doing this, you’ll inevitably create a bracket that’s a good mixture of mostly favorites and some reasonable under-dogs. The NCAA selection committee that creates the 1-16 seedings for the teams in the tournament and because those numbers are right on the brackets, most people simply go with them. They see a #3 and assume that that team is necessarily better than a #6. That’s not necessarily the case. Using a different ranking gives you a built in opportunity to go against the grain while still choosing a team that an expert thinks should win. For example, all three of our rankings options have Utah, a five seed, significantly higher than one would expect from its seeding. That certainly suggests that they’d be a good upset to pick over fourth ranked Georgetown, and it wouldn’t be a shock to see them advance over Duke. Another team all three models agree on is Maryland. Maryland is a four seed in the tournament, but all three of the models rank them as weaker than that — one as the 25th best team and two as the 33rd best team.

Of course, none of this might matter. Your friend who picks chalk might finally have her day in the sun or your brother who always picks based on color may be celebrating at the end of the tournament, but this method combines the best chance of winning with the biggest chance of being able to thump your chest and say “I had that” after correctly picking an upset. I’m going to fill in a bracket this way now!