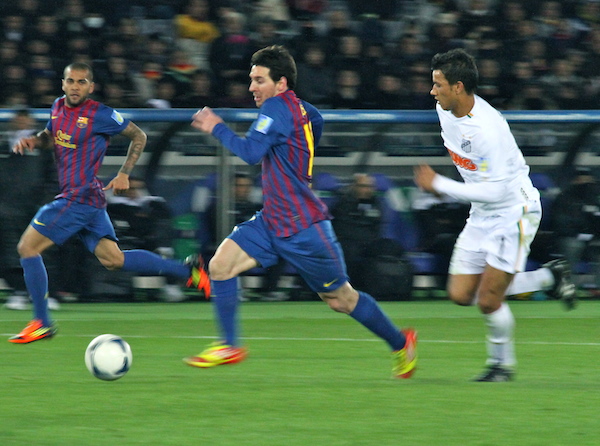 How does the away goals tie-breaker work in soccer? I’ve been loving the Champions League this year but I’m confused by away goals and why they are so important.

Thanks,
Random Name That’s Totally Not Me Asking Myself Questions I Want To Answer

How fortuitous of you to ask this question today! There’s a perfect example that I can use to explain how the away goals tie-breaker works in soccer in the two UEFA Champions League games this afternoon!

Many soccer tournaments, particularly in European club soccer, are organized into series of two games. In American sports that have series, like baseball, basketball, and hockey, the series are always an odd number of games. They are either best-two-out-of-three series, best-three-out-of-five series, or most commonly, best-four-out-of-seven series. The odd number allows for one team to always end the three, five, or seven games with a conclusive advantage in terms of how many games each team won. So, how does a two game series work? It works on goals, not winning or losing. In fact, in a two game series, also called a tie, winning or losing each of the two games is meaningless to the result of the series. In these series, you don’t, as NFL coach Herm Edwards once said, “play to win the game,” you play to score more overall or aggregate goals over the course of the two games than your opponent. A team that loses 2-0 in the first game of the series can win the series by winning the second game 3-0 or 8-4.

As you might expect with such a low scoring game like soccer, after only two games, it’s pretty regular for teams to have scored the same number of goals. This is called being tied on aggregate goals. In this case, something else needs to be done to determine the winner of the series. That something else varies from competition to competition. Many tournaments have the teams play an overtime period. Some of them use a penalty kicks to settle the winner. Lots of tournaments though, the Champions League among them, use away goals as the first way to break ties. Away goals are simple to comprehend but a little tricky in practice to understand. An away goal is scored by a team playing in the other team’s stadium. Since there are two games in these series, one is played at each team’s home stadium. Being at home has its advantages, so it’s generally thought that scoring away from home is more difficult and therefore more impressive. At the end of the two games, the team with more goals scored away from home has won the away goals tie-breaker.

The tricky part is running through all the scenarios that come up for the second game of the series. Here it’s helpful to use examples. Luckily, we have two this afternoon that provide perfect examples to study the away goals tie-breaker. Here’s the situation.

At first glance, these series look the same. In both series, one team is ahead 3-1 after the first game of the two game tie. The difference is that the team with three goals in one series played the first game at home while the other played the first game away. While the aggregate goal tally is the same, 3-1 in each series, the away goals tally is very different. Barcelona, the team leading in the first series has 3 away goals while Porto, the team leading in the second series has none because they haven’t played on the road yet. Despite losing 3-1 in the first game, Bayern Munich is actually leading in away goals, 1-0. This may seem like a small difference but it matters enormously to the possible outcomes today. Assume that each team that is down 3-1 wins their game today 2-0. Here’s what the results would be if that happened.

The away goals tie-breaker makes it much more difficult for Paris Saint-Germain to advance today than Bayern Munich, despite their both losing 3-1 in the first games of the series.

Thanks for reading and please tell me if this still doesn’t make sense,
Ezra Fischer

2 thoughts on “How does the away goals tie-breaker work in soccer?”