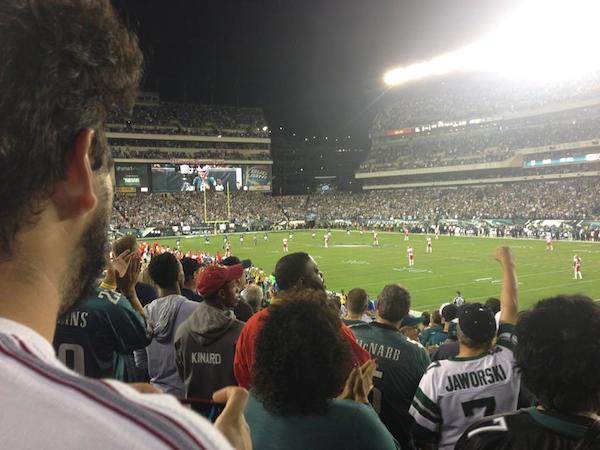 Everyone has a sports story. As part of my mission to create peace in the world between sports fans and non-sports fans, I am doing a set of interviews of people on both sides of the line. Whether you’re a die-hard fan with their favorite player’s face tattooed onto their body or someone who is not a fan but whose life intersects with sports in some way, you have a valuable story to tell. Sign up today to tell your story on our easy to use booking page.

Today, I’d like to introduce you to Jehangir Madon. Jehangir is a man of international sports fandom whose enthusiastic and thoughtful nature make his sports story worth learning. You can read a synopsis of our interview below or listen to it in full here.

How did you become an Eagles fan?

“I became a fan of the eagles for two reason within five plays. I had never really watched football before I came to America. It was on TV a few times and I was like, “Ehh whatever.” But then one day, I was home and it was the playoffs and there was nothing to do in the afternoon. So I turn on the TV, and there was this playoff game between the Eagles and the Giants, I think it was the 2000 playoffs. And on the first play the Eagles kick off and the Giants take the ball and run it all the way back for a touchdown. Now I would normally have rooted for the Blue team, you know, I like blue, but I was a little older so I say, “I’m going to cheer for the team that’s losing” and that was the Eagles. And then they had a black quarterback who was running around and I had never seen that. I did not know that Randall Cunningham existed. I didn’t know about anybody before McNabb who did that. So I thought, “Oh my God, this guy is so cool, I’m going to cheer for him.” And then I did cheer for them the whole game… and they lost.”

“My earliest sports memory is the 1994 football World Cup. It was the final between Brazil and Italy. We took our TV from the living room and put it in the kitchen because I lived in a house with ten people and the kitchen was the only place where nobody would sleep… So me, my Dad’s brother and his son took the TV and we watched this really interesting and engrossing match… A zero zero draw, and I was cheering for Italy because they were wearing blue… and they lost… I was living in India, that match was going on at 2 in the morning I think that’s why I remember it because it was such an odd time for me to be allowed to be awake.

How do sports play into your family life? What about your group of friends? or dating life?

“Dating life, it’s mostly me watching sports while my girlfriend just lies in my arms and goes to sleep. She enjoys it and I enjoy it.”

“With my friends, during the NFL, I like to hang out, get a drink and watch some games. It’s a nice social thing. I think that’s why I like sports. I just remember sitting in my house with my uncle and my brother sitting and just watching a game very intently it’s something you do together and it’s fun to cheer for something. Or cheer against something, it’s great, especially when you win when you’re not supposed to.”

What do you think being an Eagles fan says about you? What makes Eagles fans different from everyone else?

“Somehow you just believe that this year you’ll win even when all of the statistics say that there’s zero chance. But there’s always this hope.”

On fidelity to a sports team:

“When you choose a team you cannot switch, nobody respects your fandom then, especially yourself.”

How does rooting for the eagles fit into your weekly routine?

“During the NFL season, it’s all NFL. I try to catch the game at a friends house or lately I haven’t been watching because I’ve been in New York and there’s lots of nicer things to do on Sunday… What’s changed over the past four years is fantasy football, it really pulls at you and makes you want to cheer for weird things.”

“It’s become less intense. I remember in 2004 or 5 when the eagles were really good, it was like, this week I’m really excited. Because once you start losing a lot, it makes it hard to look forward to, you know, the pain that’s coming if you’re going to lose.”

During the offseason — “There’s nothing going on, it’s just nonsense stories, there’s no reason to keep up with it. And that’s the best thing about the NFL you can really really be into it and it’s only one third of the year.

Who is your all-time favorite player from the Eagles?

“Donovan McNabb. He just seemed like a funny nice guy and no matter what happened, he always took the blame. I always liked him because he was a leader and when he was younger he did really amazing things. I think we just forget when we see somebody like Kaepernick doing these things now, we’re like, “oh my God, it’s never been done before” although it’s been done every three years, McNabb has done it, Vick did it. And when [McNabb] was in his prime, he was the best at it.”

Who is your all-time football nemesis?

What’s the most important thing you’d like non-sports fans to understand about sports?

“Most of us realize that it’s just sports and when it ends its okay but that doesn’t mean when you’re cheering you don’t cheer with all your heart. Cause the real extacy you only get when you really want someone to win and you don’t expect them to win and somehow they make it and there’s few things in life that are that good.”