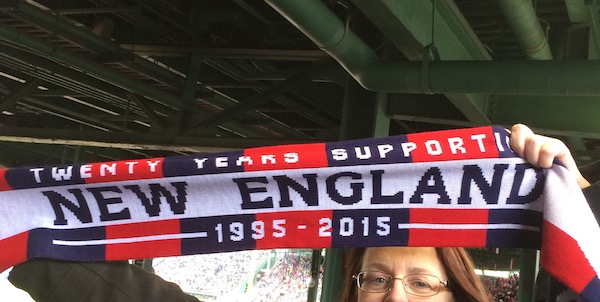 Everyone has a sports story. As part of my mission to create peace in the world between sports fans and non-sports fans, I am doing a set of interviews of people on both sides of the line. Whether you’re a die-hard fan with their favorite player’s face tattooed onto their body or someone who is not a fan but whose life intersects with sports in some way, you have a valuable story to tell. Sign up today to tell your story on our easy to use booking page.

Today, I’d like to introduce you to Mary Reagan. Mary has been a Boston sports fan her whole life and after years as a transplant, she’s returned home with lots of great stories. You can read a synopsis of our interview below or listen to it in full here.

Going to Fenway park with my father. Back then you used to have to go into the ticket office to buy your tickets. So we would have our yearly ritual of going into Fenway and deciding which games we wanted. I have very distinct memory of the first time I was allowed to pick a game. I picked the Milwaukee Brewers because my favorite player at the time had been Billy Conigliaro and they traded Billy to the Milwaukee Brewers and back then the brew were in the same league, so I got to see that game. And I actually met Billy Conigliaro a couple years ago and I told him that story. And he said, “Do you remember what I did that day? I wasn’t happy with the Red Sox and I knocked one out of the park.”

Why was he your favorite?

“Everybody else loved Tony Conigliaro and I had to be different, so I liked his brother. Of course everybody loved Yaz and the biggies but you had to have another player that was one of your favorites. So I decided Billy wasn’t getting enough love, and so this little kid was going to be his number one fan.”

On how she started rooting for the New England Tea Men, an NASL soccer team in the late 1970s:

When I was in high school, I actually started rooting for them because I was babysitting for the players kids and they would give me tickets for the Saturday afternoon games when the kids were going to come so they didn’t need a babysitter. So I picked up on Soccer that way.

On how she started rooting for the Boston Bruins

Bruins, I’m a big hockey fan. My cousins used to play hockey so my mother would keep her sister company during the practices and bring me along when I was a little kid. So, I  was exposed to hockey very young. And I grew up in the age of Bobby Orr.

Was watching sports a part of your friendships as a young person?

Probably not, it was more of a family thing. Brother and sister. And my mother was into sports as well. She liked basketball though, and I never quite got into basketball. And my father’s a huge football fan and that didn’t stick with me.

My sister and I in particular go to a lot of games together. She’s a big Revolution fan so she mostly comes with me to those games but occasional Red Sox. And my brother comes once or twice a year to the Red Sox, he’s not as into soccer. And my father hasn’t been but he’s thinking about coming to a Red Sox game with me… if I can get good seats for him.

Biggest difference in the at-stadium experience between now and when you were a kid?

Yeah, there is a lot more of that, but I like it. I don’t like — when I would go to other fields, not Fenway — I don’t like what I would call the minor league stuff at the high end games. I don’t like the between innings — I don’t know if you’d call them games or activities. That’s a minor league thing in my mind and I don’t like the “make some noise” and “everyone clap your hands” at Red Sox games. I know they do it at hockey games but… Okay, I’ll let them slide, but at baseball I’m a purist, and when you cheer, you cheer because it’s organic and not because someone tells you to.

What was it like to be a Boston Sports fan living in New York City?

It’s interesting. Especially, since 2004. It’s more of a thing with baseball than another sport I follow… The Yankees – Red Sox thing was a bit hard. It was also tough because back then, there were Red Sox bars — in part I didn’t know about a few of them and then some of the ones that have come along since came along after 2004. So I hadn’t gotten as clued into that scene. I would just watch whereever I could find it and then found out later — oh there were hundreds of people gathered at each of these bars cheering for the Red Sox.

My two go-to bars in the last few years have been Riviera and Professor Thom’s. Primarily Professor Thom’s but I started out with Riviera for hockey. It’s a Boston bar that’s not in-your-face Boston… So it’s low-key in that sense but it’s hard core when it comes to watching the games. And then Professor Thom’s is like a mecca for Boston fans in New York though. You walk in and you know you’re in a Boston bar.

Do you have any sport superstitions?

We are convinced that if we order and consume, of course, the loaded tots at Professor Thom’s that the Red Sox and Bruins will win. So our ritual — we don’t take a chance. It doesn’t always work but every time we go to watch the game, we buy the loaded tots. And we have tried tots at other places and there’s just no comparison. The loaded tots at Professor Thom’s are fantastic! I keep telling them they should make a smaller portion so that if i’m there by myself i can order it.

What do you think being an Boston sports fan says about you? What makes it different from rooting for any other teams?

What stands out most is being a Red Sox fan growing up and the decades of hoping and not getting that championship. It took dedication to keep following the Red Sox through all those years.

What’s the most important thing you’d like non-sports fans to understand about sports?

I think it’s that, especially if you’re at an event, non-sports fans can enjoy going to sporting events even if they don’t like sports. I can definitely understand people who aren’t going to sit with me and watch it on TV — might even not go to a bar and watch it there — but having people give it a chance to go to an event and experience it first hand. It may not turn them into sports fans but it may help them understand or at least appreciate — especially nowadays when there’s so much to do at events and so much that can capture your attention. I think that’s kind of cool.