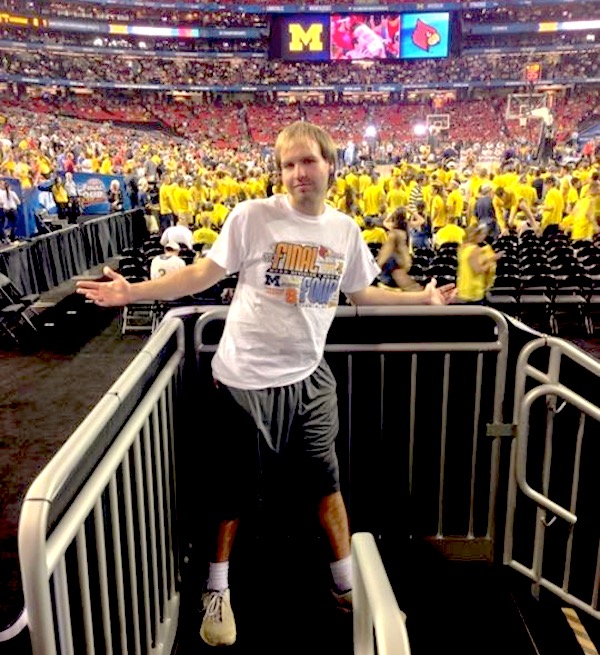 Everyone has a sports story. As part of my mission to create peace in the world between sports fans and non-sports fans, I am doing a set of interviews of people on both sides of the line. Whether you’re a die-hard fan with their favorite player’s face tattooed onto their body or someone who is not a fan but whose life intersects with sports in some way, you have a valuable story to tell. Sign up today to tell your story on our easy to use booking page or email me at dearsportsfan@gmail.com.

Today, I’d like to introduce you to Jake Northrup. Jake spent some of his childhood in Connecticut on the border between Yankees and Red Sox country, a split that divided even his own family. These days he’s in college where he divides his time between “important stuff” like schoolwork and employment and following sports passionately. You can read a synopsis of our interview below or listen to it in full here.

What is it like to root for scattered teams?

Especially because one of the teams I grew up watching is the Lakers, and they play on the west coast, I can’t watch them as often.

When I just moved to Atlanta (at age six) there was this sweepstakes for Ritz and it was win and Derek Jeter or Ken Griffey Jr. could play in your back yard. And I didn’t win but I got a Derek Jeter baseball card.

Women have ten titles, the men have four. the women seem to get more hate because of Geno [Aueriema, the  controversial UConn women’s basketball coach.] Women’s basketball there is huge. especially when the teams do well, that’s when the whole state feels like big things are happening.

I lived in the middle between Boston and New York. I did not choose [a baseball team to root for,] my dad was a Yankees fan and that pretty much is in my blood, so I was with the Yankees. My brother is a Red Sox fan. So, we got a little sibling rivalry there. He’s younger, and I like the Yankees, so he likes to pick on me.I definitely felt [the rivalry] it lives in my own home with my brother.

How do sports fit into your weekly routine?

I used to be a high school athlete, I played basketball and tennis but now that I’m in college I don’t participate that often and i do miss [it] because I used to always play pickup basketball with friends but  — school and now I have a job so i got to focus on those but when I have the time I will be watching sports.

What’s your favorite sport to watch on TV?

Oh basketball because I grew up laying it and I think it’s more action packed. More than the NFL because while the NFL waste[s] time by walking around, NBA and basketball in general — every second is running up and down the court. No wasting time.

What are your sports superstitions?

Yes! They change all the time. I know when I was younger I used to make my brother sit on an ottoman because it would help the Lakers win. Then I would wear my team clothing for a period. Then there was a point where my teams would win when I was doing my homework. This year, I don’t know what it is. It could be anything.

How do sports play into your friendships at college?

It’s huge, especially when I lived with my dorm-mates. We would talk about sports… it’s a huge integral part of college.

How would your life be different without sports?

Before I became really into sports, I was this huge history buff. I also am a shark enthusiast. I love learning about sharks. So I think I would spend a lot more time [doing] research on sharks and history.

What’s different about rooting for the Yankees? What makes Yankees fans unique?

Besides all the world series championships, you got all these legendary players. You got some sense of pride in being a team. Of course you have all the haters but you gotta just kind of shake it off.

Is your favorite player Derek Jeter?

Of course it is!

Who is your sports nemesis?

It’s David Ortiz. I remember when, in ’04 when the Yankees blew that 3-0 lead, my friends gave me such a hard time with the Red Sox and David Ortiz seems to be the guy who helped them out in fueling the comeback. So I just couldn’t stand that guy at all.

How do you feel about players who come from the Red Sox to play with the Yankees?

Oh my gosh that makes it so weird! When Johnny Damon came over, I completely switch my attitude towards him. I started liking him. now that Jacoby Ellsbury is there, I like him. And I find it a little hypocritical and ironic because i didn’t like these guys but now that they’re here in pinstripes, I like them.

What would you like non-sports fans to understand about sports or fans?

I think sports is more than just watching or playing a game. It teaches you life values like teamwork, competition, rivalry, sportsmanship, all those things.

How do sports play into your dating life?

I haven’t seen much of that but I will admit there was this girl I really liked, and considered asking out, but when I found out she was a Red Sox fan, I was like, “Oh, then that’s not going to happen.”

What do you think the ratio of male to female sports fans is in your generation?

I think… maybe because with the NFL with all their domestic violence issues, [we could] try to make it more appealing to the women — To make it look more like we really care about equality. I actually watch women’s college basketball and I think if we watched more female sports, maybe that will get the female fans to watch sports as well.

What’s the difference between men’s basketball and women’s?

When I grew up, there was basically no difference. I liked basketball in general, didn’t matter men or women. But I think with the women it’s more shoot first. Men was basically slow down, try to work down the shot clock from the 35 to the very last second. Women — dribble down the court, if you’ve got an open shot, take it, then let’s get back on defense.