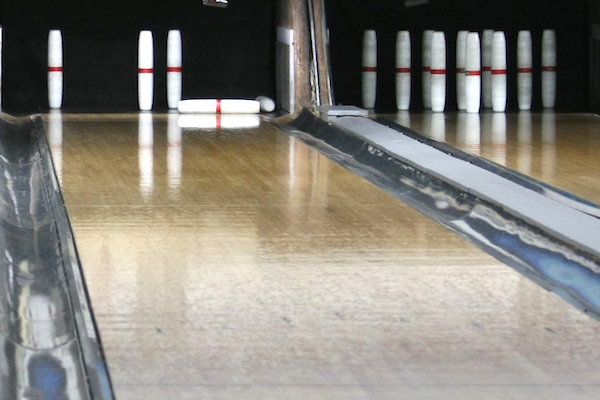 How does candlepin bowling work? How is it different from regular bowling? How does the scoring work?

Candlepin bowling is a fun game simultaneously more accessible to beginners than standard bowling and more difficult for experts to master. It was invented in 1880 in Worcester, Massachusetts by a man named Justin White. It remains the primary form of bowling in much of New England and parts of Canada. The basic architecture of candlepin bowling is the same as the standard form of bowling found in most of the United States, called ten-pin bowling. Players stand on one end of a long, narrow, lane and compete to see who can knock the most stuff over at the other end by rolling down it. The difference is largely in the details of how the game works, its terminology, and how it is scored.

What’s the difference between candlepin bowling and standard bowling?

There are two obvious categories of differences between standard bowling and candlepin bowling: the equipment used and how the game works. Candlepin gets its name from the wooden pins used, so let’s start there. Candlepins are much thinner than regular bowling pins and are virtually straight up-and-down cylinders. They do taper out a tiny bit at the middle (don’t we all), but at their thickest, they are less than three inches in diameter. The pins are the same at top and bottom and weigh only two pounds, eight ounces. The ball is similarly much smaller than a regular bowling ball. It is only four and a half inches in diameter and weighs slightly less than a single pin. As you might expect for a ball that easily fits in most people’s palms, there are no finger holes. In terms of gameplay, the two biggest differences are that each bowler gets three chances to throw the ball down the lane instead of two and that any pins that are knocked down during the first or second throw are left on the lane and are therefore live to use as obstacles or helpful projectiles/things to bounce off of during subsequent throws.

For games that are so similar, candlepin and standard bowling use surprisingly different terms:

How do you score candlepin bowling?

I once wrote a long post about how scoring in regular bowling works. Luckily for all of us, the scoring in candlepin bowling is much simpler! Oh, it may seem complicated, but actually it’s very easy.

The string is divided into ten boxes during which each bowler has to knock down the ten pins. Each pin a bowler knocks down is worth one point. However many pins a bowler knocks down in three chances, that’s how many points she gets. Easy, right? All the complexity comes into the game when a bowler knocks all ten pins down before she has used all three balls. Don’t panic though, here’s the important thing to remember — no matter what happens, each box gets the score of three throws. So, if a bowler knocks down all ten pins in two throws, she gets ten plus however many pins she knocks down on her next roll. If a bowler knocks down all the pins in one throw, he gets ten plus the number of pins he knocks down on his next two rolls. Instead of taking the time for those extra rolls on their own, we simply use the roll or rolls from the bowler’s next turn and those count for the previous and current box. The only exception to this is the tenth and last box. Since there is no next turn, the bowler takes their one or two extra rolls right after knocking down all the pins during their normal turn.

Which game is better?

Haha, good try — I’m not going to start a regional battle on this site. Both games are fun and I’d be happy spending an evening playing either of them. Candlepin bowling is more physically accessible for beginners because of the ball size and weight. The sheer weight of a standard bowling ball can turn a fun evening into a week of soreness for beginners (on the flip side, you get some exercise!) The fact that a stronger person who can comfortably throw a heavier ball faster has an advantage also creates an immediate imbalance in standard bowling that candlepin bowling does not have. On the other hand, candlepin bowling is much harder, even for experts. The thinner pins don’t help each other fall down in candlepin with nearly the predictability or consistency of standard bowling. As a result, beginners are going to have more trouble ramping up to intermediate status. After a few games of standard bowling, you can start attempting to be intentional about what you’re trying to do when you roll the ball. After a few games of candlepin bowling, you’re still basically just trying to roll it straight and hit something. Strikes and spares are easier to come by in standard bowling. In candlepin, even the experts don’t often get strikes.

Time to get out there and try it yourself! Let me know how it goes,
Ezra Fischer