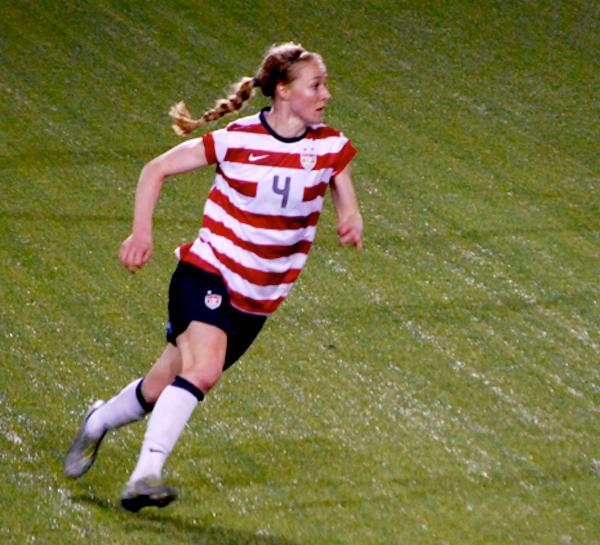 National team experience: 81 appearances, this will be her second World Cup, and she has 0 international goals.

What to expect from Becky Sauerbrunn: Becky Sauerbrunn is a prototypical central defender. She’s strong, physical, and totally reliable. If you’re a midfielder, you feel secure knowing that if you make a mistake, Sauerbrunn is right behind you to clean it up. If you’re a goalie, you know you can count on her to keep the front of your net clear. With newcomer Julie Johnston taking over the other central defensive position and doing so with a distinct attacking flair, Sauerbrunn has become the leader of the back line and an even more firmly defensive player. Barring a major injury, we should expect to see Sauerbrunn on the field for every minute of the World Cup. She’s the only player to start in every match the team has played so far this year and she barely ever comes off the field. She’s used to being a workhorse — during her two years in the now defunct WPS professional soccer league, she was the only player in the entire league to play every minute of every game. At her current professional team, the NWSL’s FC Kansas City, she is captain and reigning two-time defensive player of the year.

Video: Like I said, Becky Sauerbrunn is the person you want cleaning up your idiotic mistakes.

Non-gendered personal interest item: Every player who makes a national team remembers their first game with the team. It’s a goal that many of them have been fighting toward for most of their lives. For Becky Sauerbrunn, that sublime memory was cemented and complicated by suffering a broken nose. Can you imagine what that would feel like? Not just the broken nose, but to have made it to the pinnacle of your profession only to break your nose in your first day at work? Crazy.

Links: Read Joe Steigmeyer make the case that Sauerbrunn is the “most important” player on the U.S. Team in the Bleacher Report. Check out Sauerbrunn’s US Soccer page and follow her on Twitter.