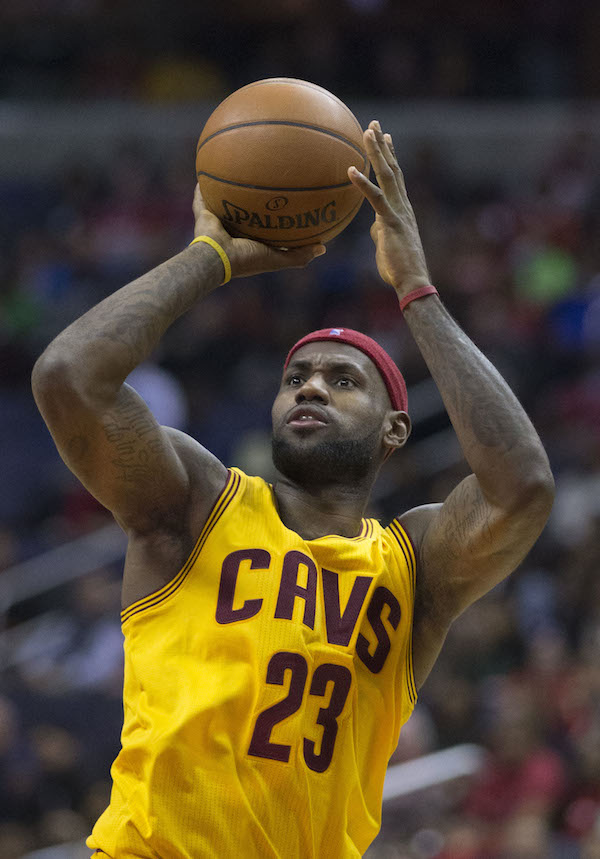 What do you think of the NBA Finals this year? People seem to love watching LeBron James almost single-handedly beat the Golden State Warriors. They think it’s an incredible performance by James, and it is, but it also seems to confirm something I’ve not liked about basketball for a long time — that the individual is so much more important than the team. Basketball seems like an incredibly selfish sport. Is basketball the most selfish sport?

The skills and effort of a single person make more of a difference to whether their team wins in basketball than any other sport but that doesn’t mean that the sport is selfish. To answer your question, let’s examine why one player has a bigger impact on basketball than any other sport and then discuss whether that inevitably leads to selfishness. First though, we need to talk briefly about race.

Basketball has a complicated racial history in this country. Throughout the first half of the 20th century, the sport was dominated by Jewish players, mostly from New York City and other nearby cities. Our current professional league, the National Basketball Association, was created in 1946 and so it caught the tail end of the Jewish basketball dynasty. The first basket in NBA history was scored by New York Knick, Ossie Schectman. A documentary, The First Basket, was named after this hoop, and describes the Jewish influence on the sport and league. Throughout the 1950s, Jews were replaced by African-Americans and by the mid-60s, most teams had close to a 50/50 split. From there, the league drew a progressively larger percent of their players from African-American households until it reached its current status as the professional sports league with the highest percentage of African Americans. According to the Race and Ethnicity in the NBA Wikipedia page, the NBA in 2011 was 78% African American. The reason why all of this is important is that race and racial stereotypes color the way many people describe activities, including sports. For the past 50 years of professional basketball in this country, that has unfortunately meant that the default criticisms of basketball players have mimicked negative stereotypes of African-Americans. Basketball players have been accused of being lazy and on drugs and they’ve been called thugs and yes, selfish. Compare that to what was written about basketball during the Jewish dominated 1930s, “the game places a premium on an alert scheming mind, flashy trickiness, artful dodging and general smart-aleckness.” Lazy? Selfish? Scheming? Smart-aleckness? It’s clear that we have to guard against racial stereotypes when we talk about the nature of basketball. We’ll proceed carefully.

A single basketball player can have a bigger impact on their team than any player in any other major team sport. There’s a simple numerical reason for this. Basketball is played five on five. Soccer is 11 on 11, football 11 on 11, baseball is nine (or 10 if you’re playing with and count a designated hitter), and hockey is six on six. Furthermore, a basketball player is able to play a greater percentage of the game than in most other sports. Football players play only on offense or defense, and often not even for all of the plays in either phase. Baseball players are limited to hitting once in every nine at bats and starting pitchers only pitch once every five games. Hockey is so exhausting that players are only on the ice for 45 seconds to a minute at a time before substituting. Soccer is the only sport where more players play a higher percentage of the game, but with 11 on the field at a time, it’s harder for an individual to dominate like a LeBron James can in basketball. The last, and perhaps most meaningful reason why it seems like a single basketball player can have a bigger impact on her team than in any other sport is how deliberate and individual offense can be. Basketball teams can usually create a one on one matchup for an offensive player, called an iso (short for isolation) whenever they want. The Cavaliers often default to this approach with James. That’s simply not true in other team sports. Hockey and soccer are too fluid and chaotic to ever consistently transform their sport into a contest of individuals. Any offense in football is evidently reliant on teamwork. The center has to snap the ball to the quarterback. The offensive line needs to protect him. The quarterback needs a wide receiver to get open and to catch the ball. Each part obviously relies on the other. In basketball, it’s easier for a team to transform a team sport into a contest between their best player and the opponent’s best player.

Being selfish has to do with motivation, not action. Google’s dictionary defines selfish as “lacking consideration for others; concerned chiefly with one’s own personal profit or pleasure.” The best basketball player on a team may do more than everyone else, but if he does it with the team’s goal of winning in his mind; if she does it because she wants her team to win, then he or she cannot be said to be selfish. One reason why people might think of the best basketball player on a team as being selfish is because the roles on a basketball court are so amorphous. We don’t call a starting pitcher in baseball selfish for throwing more pitches than any of the relievers on the team. We don’t consider a quarterback in football to be selfish because he barely ever lets anyone else throw the ball. It’s only in soccer, hockey, and basketball, where the positions all kind of look the same that accusations of selfishness come up. We’ve also been considering the best player on the team. What about the fourth, fifth, and sixth best players? The ones that are out there primarily to rebound and set picks? Just by being in the NBA, it’s safe to assume they were the best player on their middle school, high school, and maybe even college teams. They once were the ones doing most of the scoring and now their primary goal is to support the best on their team. There are more of those players than there are stars and they clearly cannot be called selfish, given how they give themselves up for the team’s good. Of course, it is possible for a basketball player to be selfish. She can refuse to pass to her teammates. He can shoot almost every time he gets the ball. For what its worth, LeBron James does neither of those things. He’s an excellent and willing passer. James could easily be selfish if he wanted to though, he touches the ball on most of the Cavaliers’ plays. Selfish players have an easier time being selfish in basketball than in other sports but that doesn’t make basketball a selfish game. It just makes it one where it’s easier to tell when someone is being selfish.