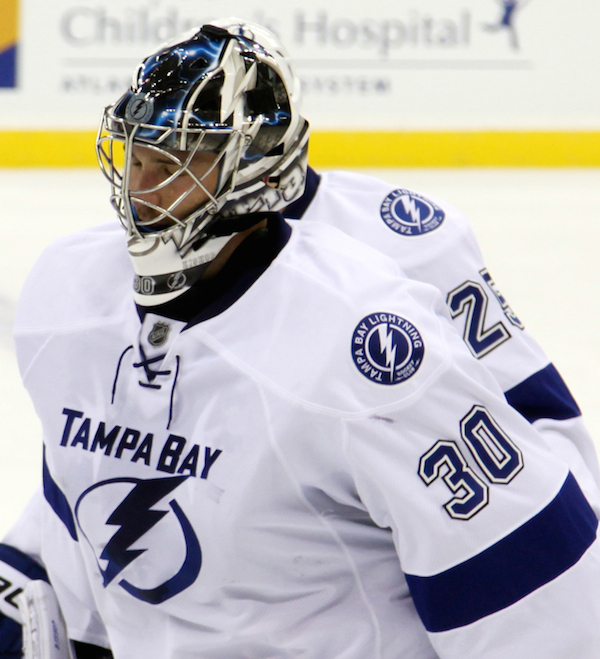 Have you been watching the Stanley Cup Finals this year? I’m curious about the Tampa Bay Lightning goalie. He’s obviously injured but no one will say how. All they say is that he has a “lower body injury.” Why don’t hockey teams announce injuries like football?

I have seen some of the Stanley Cup Finals this year. They’ve been exciting! Among the most suspenseful parts of the series has been watching Ben Bishop try to play through whatever injury he has. During Game Two, he was forced out of the game twice. He made it through Game Three despite seemingly struggling to move side to side or get back up to his feet from the ground. He sat out Game Four completely and watched his backup, Andrei Vasilevskiy, play only moderately well in a loss. At the time of writing this post, his status for Game Five, tonight, is still unknown. Equally unknown is what, exactly, is wrong with him.

Information about injuries to hockey players is usually hard to come by. That’s never more true than during the playoffs. Since 2008, teams have not been required to give the media or the league any information about player injures although they are required not to release misleading information. Most of the time, teams do give out some information. The “lower body injury” language that you referred to in your question is a hockey classic. “Lower body” or “upper body”  is all we normally get. Sometimes, as is the case with Bishop, teams don’t even specify the hemisphere of the injury. The only thing the Tampa Bay Lightning have officially said about Bishop is that he has an “unspecified injury.”

Theoretically, the reason for this stonewalling is to protect the injured player. It’s commonly thought that if an opposing team knows that Player A’s left knee is hurt or her right arm, they will target that specific spot for extra abuse in the form of legal checks or illegally thrown elbows or slashing sticks. There could also be tactical considerations. Some injuries limit what a player can do on the ice — maybe a player with in injured wrist will have trouble lifting the puck on shots. If that news gets out there, the opposing goalie will know to concentrate on covering the bottom of the net.

Of course, with the availability and malleability of video these days, every play of every game can be dissected from any number of angles. If a player gets hurt in a game, it’s usually going to be obvious what limb or joint is the injured body part. Even when that is the case, most teams continue the upper body/lower body charade. I’ve seen obvious injures, like when a player blocks a shot with his left foot and then limps off the ice. What then, could be the point of classifying that injury as a “lower body injury” instead of a “left foot injury.”

In cases where the injury is obvious, the obfuscation can only be for one of three reasons:

The only reason we expect teams to go public with the nature of injuries is that the National Football League requires their teams to do so. Why? Is it for the enjoyment of fans? Not really. It’s all about gambling. Sports books cannot and will not set lines if they don’t know whether an important player will play in an upcoming game. Forcing teams to release injury information facilitates sports betting which always has been and continues to be one of the big drivers of attention to sports. Even though the NFL refuses to endorse gambling on their sport, their policy on injury information suggests otherwise. Betting on hockey is big business but it’s not nearly as big as football betting is, and perhaps the NHL doesn’t feel quite the same pressure to pander to the gambling industry.