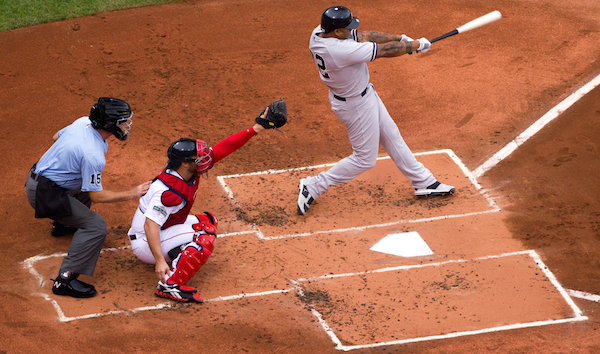 Why is the MLB baseball season so long? Baseball teams play like every day for more than six months. That’s SO MUCH BASEBALL! What’s the point?

The Major League Baseball regular season is 162 games. That’s almost twice as long as the NHL ice hockey and NBA basketball schedules. It’s 10 times longer than the 16 game NFL football schedule. It’s harder to compare baseball to soccer leagues whose seasons vary in length from around 30 games to 40 games but whose teams simultaneously compete in a number of other domestic and international competitions and whose players may be called up to play internationally as well. Still, it’s pretty safe to say that baseball seasons involve the most games of any common professional sport.

Baseball has had long seasons for as long as it has been played professionally. In 1876, the first year that professional leagues started mandating the number of games each team should play (before that, they simply gave a minimum but teams could play more games if they wanted) each team played 70 games. By 1901, the first year that the National League and American League both played, the schedule had doubled to 140 games. From there, the number vacillated a bit before moving to 154 in 1920 and then the current 162 in 1961-62. The primary cause for each lengthening of the schedule was team expansion. Up to 1962, the number of games was set by taking the number of possible opponents and multiplying by some number so that each team would play each opposing team 18 or 20 times. Since then, the leagues have sought to retain the same number of games (162) regardless of the number of teams and have done so by changing who teams play and how many times they face each other.

The simplest reason for why baseball seasons are longer than other sports is because they can be. Baseball is not a particularly physically demanding sport. Basketball and hockey’s 82 game seasons engender far more angst about the physical wear and tear on players than baseball’s season which is twice as long. The fact that the most commonly used performance enhancing drug in baseball history has not been steroids, but amphetamines called “greenies” supports the idea that the grind of a long baseball season is more mental than physical. Baseball is mostly a non-contact sport, so its teams can play 162 games in six months and even sometimes twice a day without losing an insupportable percentage of their roster to injury. Bonus fact — I read somewhere that early baseball was more beloved by lower and middle class people and early football by the upper classes because only upper class people had the luxury to risk injury in their recreational activities. Lower and middle class people who worked in more physical occupations couldn’t risk it, so they played baseball.

The other reason for baseball’s long season is that more than any other sport, baseball believes in large sample sizes to determine the best team. At its simplest, baseball is a series of one on one encounters between a pitcher and a hitter. Each game has around 60 to 70 of these contests. The long season provides a greater significance to the statistics produced by each player and each team and baseball is all about statistics! No sport cares more about its records – who is leading in each meaningful statistical category each year and in history. Of course, this is a bit of a chicken or the egg argument. It’s possible that baseball’s reverence for statistics comes from its long seasons and not the other way around.

Baseball’s long schedule gives following the sport a decidedly different feel from being a fan of any other sport. A favorite baseball team is like a friend you can rely on. They’re there almost every night. Baseball fans don’t need to schedule time to spend with their team, they can just use baseball to fill up any down time in their social schedule. Baseball remains one of the few sports that people still listen to on the radio, not just because its action is simple and slow enough to easily imagine but also because the number of games in a season mean that no single game demands full and undivided attention. Going to see a baseball game in person is far easier and more affordable because there are so many games. In so many ways, baseball’s plentiful schedule has molded it into the pastime that so many people enjoy.