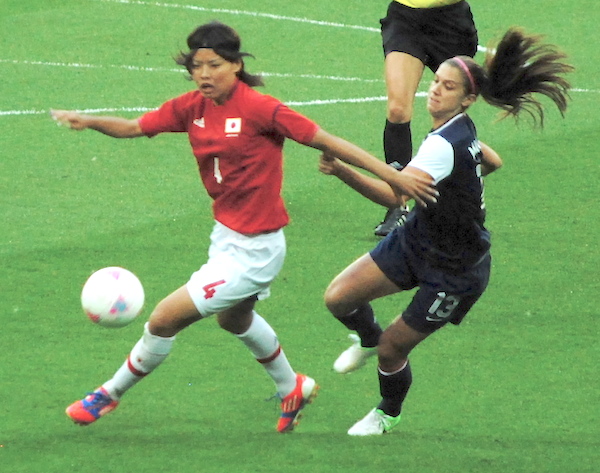 Despite all emotion to the contrary, the World Cup is not over after last night’s semifinal victory by the United States team. In this post, we’ll preview the other semifinal: Japan vs. England, Wednesday, July 1, 7 p.m. ET on Fox Sports 1.

There’s a saying in boxing that “styles make fights.” What this means is that the very best matchups are between fighters or teams with contrasting styles. That’s exactly what we have in this semifinal matchup between England and Japan. This is a classic soccer matchup of a pragmatic team, England, against an artful team, Japan. Often pragmatic is a word used to describe a team that defends a lot and tries to win every game 1-0 on a penalty kick. That’s not the boring case with England. They really play to win, they’re just much more direct than Japan is. Japan likes to dance on the ball and flick it back and forth from player to player, dazzling and thoroughly confusing their opponents before striking. Japan is amazing to watch and will be the favorites in this game. England likes to go straight for the win. In their last game, against Canada, they scored two goals in the first twenty minutes and then played tough defense for the rest of the game.

Both teams are playing for a place in the final game against the United States but the two countries are coming at it from a very different place. This is already the farthest the England team has ever gone in a World Cup. They’re in uncharted territory. Japan, meanwhile, is the defending champion. They’ve been here before, literally for many of the players, and they know how good it feels to go all the way. Alone among world soccer powers, they have the confidence of having beaten the U.S. in a World Cup final. They’re not intimidated by the prospect of meeting us again in the finals, they want it.

Mark Sampson – England’s coach, Mark Sampson, is a man on the move. His rise from head coach of a non-affiliated women’s professional team in England to head coach of the national team can only be described as meteoric. He was not around for the 2012 game between these teams but you can bet he’s acutely aware of it and has been using it to motivate his team to victory today.

Karen Carney – Nicknamed “the Wizard” Carney is key to England’s attack. She also has a back injury. This is not a good combination but so far, so good for Carney and England. She was held out of their first Group stage game and used cautiously ever since. My guess is that the kid gloves come off in this game. If Carney needs to play 90 or even 120 minutes, she’ll find a way.

Fran Kirby – As a former defender, I rarely root for forwards, but Kirby is an exception. Aside from the tear-jerking story of her mother who died of an aneurism while with Kirby at a soccer event when Kirby was 14, Kirby’s simply a joy to watch play. She’s relentlessly fast, pursues the ball like a demon, and is very skilled without ever looking overly fancy. She never made it into the quarterfinal game against Canada, so she’ll be extra fresh if she plays in this one.

Aya Miyami – The current captain of the Japanese team, Aya Miyami, is a wizard in the midfield. She seems to have eyes in the back of her head and is able to pass to open players, seemingly by sonar or telepathy. She’ll take most of the team’s free kicks and other set pieces.

Homare Sawa – Homare Sawa used to be Aya Miyami, although her legend is still so big that it’s probably more accurate to say that Aya Miyami is the new Homare Sawa. Sawa is the same type of player as Miyami which partially explains coach Norio Sasaki’s seemingly strange choice to drop her from the team during the lead up to the World Cup — he wanted to make clear the transition from Sawa to Miyami in the midfield. Sawa was added back to the team right before the tournament and has been successful so far playing beside Miyama or coming in off the bench.

Norio Sasaki – Winning a World Cup as a coach, like Norio Sasaki did in 2011, gives you quite a bit of cachet. Doing it in the aftermath of the triple earthquake/tsunami/nuclear reactor disaster, makes you a celebrity for life. Sasaki is definitely that. Despite comparing himself to Steven Spielberg and his curious Sawa machinations, Sasaki still seems to have his finger on the pulse of his team.

I’m going to go against the grain here and pick England to win. Japan is the better team but England simply seems to be living a charmed existence in this tournament.