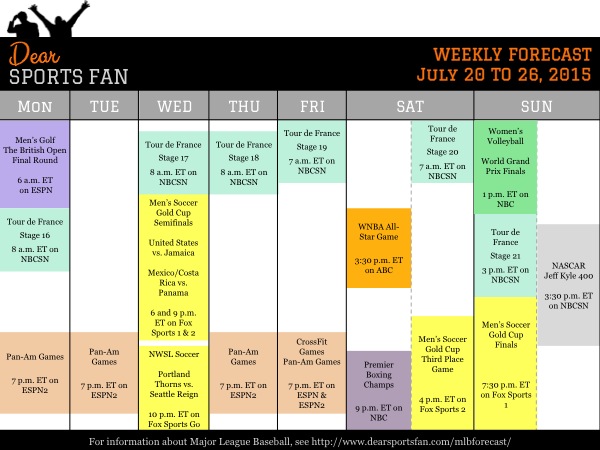 This does not include MLB baseball games. There are so many of those every day that another approach is needed. That approach is our special Daily MLB Forecast.

Monday: Thanks to the Scottish wind and rain (we should have known we could count on it) we get the final round of the British Open. After three rounds, Paul Dunne, an amateur golfer, is in the lead! It would be absolutely amazing if he won against a field of mostly pros. Rooting for him is a great reason to watch the golf. The Tour de France heads back into the mountains. Will anyone be able to take time away from race leader, Chris Froome? In the evening, tune into the Pan-Am games for highlights of the day’s many sporting events there.

Tuesday: Uh… time out for sports, I guess? There’s barely a sporting event on the horizon. Head to the beach!

Wednesday: This is perhaps the biggest day of the week. The Tour de France comes back after a rest day and hits the Alps, hard. The United States will look to advance against Jamaica in the Gold Cup, men’s soccer semifinals. The other semi will be contested between Panama and TKTKTKTKT. After the first half of the second Gold Cup game, if you’re beginning to tire of men’s soccer but are still into soccer, tune in to the NWSL game between the Portland Thorns and Seattle Reign. This is the first game of Fox’s 10 game contract with the league, which is exciting!

Thursday: Wake up in the morning and turn on the Tour de France if you want to witness some sublime suffering. Today’s stage features the Col du Glandon, which averages a 5.1% incline… for 13.5 miles! After that, if you’ve still got the heart to watch more exertion, watch the Pan-Am games in the evening.

Friday: Sorry for the false alarm yesterday, today’s cycling will be even more grueling. Stage 19 will see riders climbing the Col de la Croix de Fer, which I believe translates to “the mountain of the burn in your thighs.” This one is even longer and even steeper than yesterday’s big climb. In the evening, the CrossFit games join the Pan-Am games as non-team-sport options.

Saturday: In most editions of the Tour de France, the winner is a virtual lock by the second to last day of racing. That likely won’t be the case in this year’s tour, thanks to the gigantic mountains in this stage, which ends with the Alpe D’Huez, a mountain so feared and revered in cycling that even a casual fan like myself knows its name. In the afternoon, when it’s too hot to be outside anyway, watch the WNBA All-Star game or the men’s soccer Gold Cup third place game. Hopefully that won’t involve the U.S. team. In the evening, check out some rare boxing on network TV.

Sunday: The last day of the week is the last day of the Tour de France. This stage truly is ceremonial, with the winning team drinking champagne as they ride. Not ceremonial are two finals – the World Grand Prix final in women’s volleyball, and the Gold Cup finals in men’s soccer. Hopefully this game does involve the U.S. team. Between those finals, you can catch a NASCAR race from Indianapolis speedway, home of the famous Indy 500.