By now, the Denver Broncos have shed their reputation as one of the winning-less teams in football to all but the most past-oriented football fans. Their sustained success throughout the 1980s, 90s, 2000s, have washed the slate clean. What’s left is a powerhouse but not a dynastic franchise. They’re often among the best teams but they rarely seem to win the Super Bowl. Like all sports teams in Denver, the Broncos benefit from playing their home games at an elevation of around a mile above sea level. This gives the Broncos players, who are accustomed to exertion at high altitude, an advantage over their opponents who can often be seen gasping for breath. An additional effect for football is that balls can be kicked much further than in other stadiums. The NFL record for field goal distance — 64 yards — was set by Broncos kicker Matt Prater in 2013. He surpassed four kicks of 63 yards, two of which were also set in Denver’s Mile High stadium. Although people often associate Colorado with snow, Denver is one of the sunniest cities in the country and the weather for football games is often quite good, even late in the season.

Who are some notable players or figures from the Denver Broncos?

John Elway is the most prominent person in Denver Broncos history. Coming out of Stanford University in 1983, he was the consensus number one draft pick in that year’s draft. The only problem was, that pick was held by the Baltimore Colts (who eventually moved to Indianapolis) and Elway was determined not to play there. It’s rare for a player to have any say in where he plays but because Elway was also a highly regarded baseball player who had been drafted by the New York Yankees in the second round of the 1981 Major League Baseball draft, Elway had some bargaining power. The Colts drafted him anyway but he was eventually successful in forcing a trade to the Denver Broncos, one of his several preferred destinations, before the season began. He played for the Broncos for his entire 16-year record setting career. A dual threat at quarterback, Elway could run and pass, but despite taking his team to the Super Bowl three times in his first 14 seasons, entering the 1997 season he was a 37 year-old who had never won a championship. Who knows how his career would have been remembered if the Broncos had not won two straight Super Bowls before Elway retired? As it stands, he’s remembered as one of the greatest ever to play the position and one of the few who got the storybook ending of retiring directly after a Super Bowl win. In 2011, a little more than a decade after retiring, Elway rejoined the Broncos as an executive. He quickly became the de-facto most important person in the organization, making all important personnel decisions for the team.

Floyd Little was the Broncos one shining light during their dark period. A running back and kick returner, Little played for the Broncos for nine years from 1967 to 1975 and was team captain for all nine years. Known simply as “the franchise,” his nickname may have a larger grain of truth in it than most. In the team’s Wikipedia entry, Little receives credit for being “instrumental in keeping the team in Denver.” He was elected into the NFL Hall of Fame in 2010.

Where do the Denver Broncos play?

Imagine you’re about to go on a blind date and all you know about the person is that he or she is a Denver Broncos fan. Here’s what you can guess about that person. Remember that all fans are unique. We bear no responsibility for any misunderstandings we engender. Trust but verify.

The Broncos fan is supremely passionate without quite reaching the levels of insanity that fans of other football teams sometimes reach. Maybe it’s the weather, which is 70° and sunny one minute and 25° and snowing the next, that suggests that success and failure are both profoundly temporary. Maybe it’s the Colorado culture which emphasizes getting outside and biking, skiing, hiking, or mountain climbing yourself more than watching other people sweat that makes what happens on the field just one iota less important. Or maybe it’s the marijuana laws… who knows? This quality doesn’t make them bad fans, and it certainly won’t hurt your chances of having a positive first date.

What will make a Denver Broncos fan squirm?

The easiest way is probably to talk about how much the consistently snowy winter weather effects their team. As we know, this isn’t the case in Denver! Another good way would be to slight John Elway in some way. That man is a god to Denver Broncos fans!

Team colors are orange, navy, and white. Their current uniforms look like this. 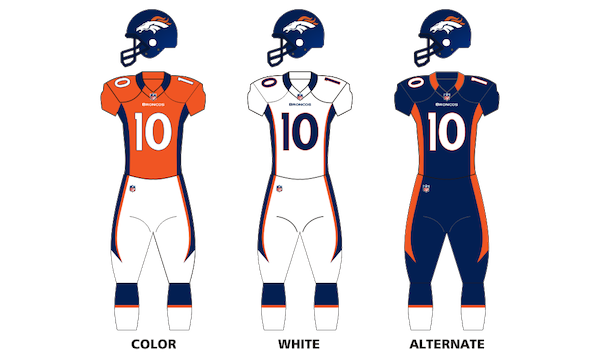 Coming soon — a post about the 2015 Denver Broncos including an overview of their most interesting characters as well as what fans expect from the team this year.