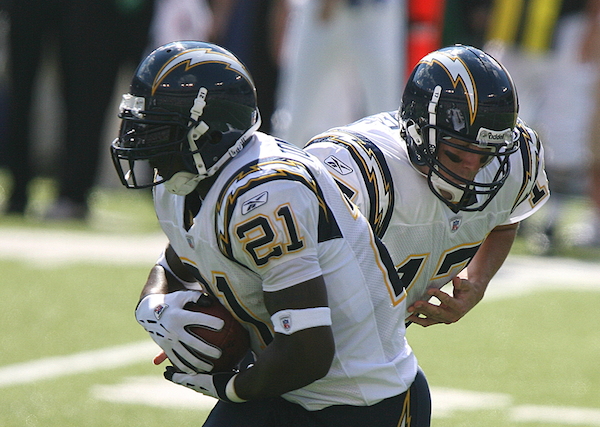 The Chargers have often been an exciting team throughout their history. In 1979, they became the first NFL team to pass more than they ran. They are known for having talented players, coaches, and general managers, and then failing despite of all that. Chargers fans have a little bit of a chip on their shoulder because they’re often overlooked by the success or flashiness of other teams in their division. One of thirteen teams to never win a championship, Chargers fans are still waiting for that magical moment.

Who are some notable players or figures from the San Diego Chargers?

Junior Seau is the person historians or epic poets will focus on when the tragic history of the NFL is written. Born and raised in San Diego, he was drafted by his home town team in 1990. He quickly became a fan favorite, team leader, and one of the best linebackers in the league. He played for the Chargers for 13 seasons before finishing his career with two stints for the Miami Dolphins and New England Patriots. At no time, regardless of what other team he played for, was he associated with any team more closely than with the Chargers. He was a Charger for life. Unfortunately, his life was far too short. In 2012, at the age of 43, Seau killed himself by shooting himself in the chest. His family donated his brain to a lab studying Chronic Traumatic Encephalopathy (CTE), a degenerative brain condition that has been linked to football. His family has opted out of the NFL concussion settlement and is suing the league individually. Seau remains a fan favorite. His number was retired by the team in 2012 and he was elected to the NFL Hall of Fame in 2015.

Dan Fouts typifies the San Diego Chargers. He was a revolutionary player who set passing records galore during his 15 year career with the team. He set the record for most passing yards in a season in three consecutive years in 1979, 1980, and again in 1981. In 1982, he set a record for highest average passing yards per game. He was a six-time Pro Bowl quarterback and was elected into the NFL Hall of Fame in 1993. You probably can already hear the “but” coming. During Fouts’ term as quarterback of the Chargers, they never made it to a Super Bowl, much less won one. Today Fouts is a football commentator on CBS.

Where do the San Diego Chargers play?

Imagine you’re about to go on a blind date and all you know about the person is that he or she is a San Diego Chargers fan. Here’s what you can guess about that person. Remember that all fans are unique. We bear no responsibility for any misunderstandings we engender. Trust but verify.

Imagine that the date is going really well. You’ve hit it off wonderfully. Your stories are making him or her laugh, his or hers are giving you a great view into the kind of person they are, and it’s all good. If you’re sitting across the table from a true Chargers fan, they’re going to be absolutely, 100% convinced that something is about to go terribly wrong. It’s been bred into them from watching the Chargers, a team whose most famous play might be the “Immaculate Deception” when they lost a game because a fumble rolled forward into the endzone. This is a team which in recent years always seems to find a way to impress early in the season and then fall apart as the season goes on. They make the playoffs… only to fail in them. Be kind, reassure your date that they don’t share the fate of their favorite football team.

What will make a San Diego Chargers fan squirm?

I probably demonstrated this to you above in this post when I claimed that the Chargers don’t have any real rivals. Do that and add in that the team might move to Los Angeles and you’re guaranteed to make a San Diego Chargers fan squirm.

Team colors are navy blue, powder blue, gold, and white. Their current uniforms look like this.

Coming soon — a post about the 2015 San Diego Chargers including an overview of their most interesting characters as well as what fans expect from the team this year.