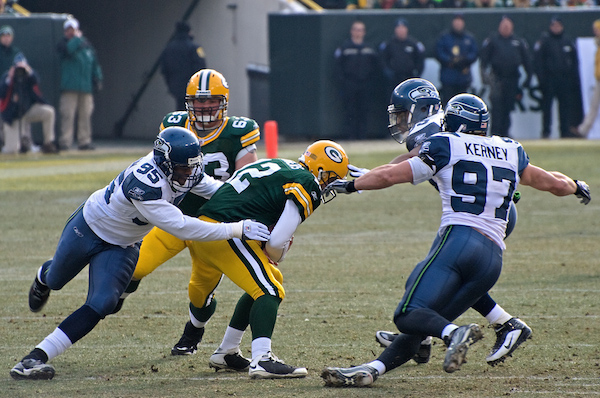 The Seahawks are a little bit different. They’re wacky, they’re innovative, they’re colorful, they’re unique. They are the league’s only team in the Pacific Northwest, an area that seems to have its own particular and somewhat separate culture from the rest of the country. They are the only team to have advanced to the conference finals in both conferences. They wear teal and neon green. Their fans are extremely vocal in support of their team. They’ve set World Records for stadium noise levels and actually caused a recordable seismic event during one memorable touchdown run. Owned by a co-founder of Microsoft, the Seahawks are on the edge of technology use in football, and during the administration of their current coach, Pete Carroll, at the forefront of a new coaching philosophy. The Seahawks are an exciting, trend-setting team.

Who are some notable players or figures from the Seattle Seahawks?

Pete Carroll is the current coach of the Seahawks and one of the most interesting figures in the league. In my profile of Carroll before the Superbowl XLIX in February, 2015, I wrote, “Pete Carroll is relentlessly laid back. He is an aggressive play-caller (which got him the moniker as “Big Ball’s Pete” at USC) who relies heavily on his players’ instincts and talent to win games… If there is a single theme that runs throughout everything Carroll believes in and does as a football coach, it is positive energy.” Carroll will need all the positivity he can muster during the 2015 after a heartbreaking loss in the Super Bowl, which most people blame Carroll’s last second choice to throw a pass instead of run the ball on the goal line.

Jim Zorn was the quarterback of the Seahawks from 1976 through 1983. He wasn’t the best quarterback in the league but his character so perfectly aligned with that of the Seahawks that he became a notable part of the team’s history. A left-handed quarterback, Zorn subsisted on improvisation and canny to make his way in the league. After his playing career, Zorn became a coach, and eventually moved from quarterbacks coach in Seattle to become the head coach of the Washington Redskins in 2008. During that period, Elizabeth Merrill wrote a wonderful profile of Zorn for ESPN. In it, Zorn’s wife describes him: “You cannot put him into a box,” she says. “He just won’t fit in. He squishes out all over the sides.” That’s Zorn and that’s the Seahawks.

Steve Largent is a hall of fame wide receiver who played his entire career for the Seahawks from 1976 to 1989. At the time of his retirement, he was the single most accomplished pass catcher in NFL history. As someone who explained crossing the picket line to become a scab during the 1982 NFL player strike by siting religious text, it’s no surprise that he went into politics after his playing career. He was a four-term Congressperson in Oklahoma and lost in a closely contested gubernatorial election in 2002.

Where do the Seattle Seahawks play?

Imagine you’re about to go on a blind date and all you know about the person is that he or she is a Seattle Seahawks fan. Here’s what you can guess about that person. Remember that all fans are unique. We bear no responsibility for any misunderstandings we engender. Trust but verify.

With the recent success of the team, there are a lot of people across the country who have become new Seahawks fans. There’s nothing wrong with that, it’s great for people to get interested in a sport and choose a team to follow. Front-running as a personality trait through… well, it should make you think twice about getting into a long-term relationship with that person. When things get tough, will they stick with you? When age starts to line your face and wrinkle your skin, are they going to move on to someone new? I’d be wary of bandwagon Seahawks fans. On the other hand, someone who as rooted for the Seahawks their whole life may be pleasantly quirky and quite loyal.

What will make a Seattle Seahawks fan squirm?

Right now, the best thing you can do is to strategically use the word “run.” Particularly in phrases like — “are you sure you don’t want to just run to the store to get it?”  I think you might regret it if you didn’t run there right now.” Or even, “you know what’s the best feeling in the world? Just running. I love running. I run whenever I possibly can. It’s never let me down.”

Coming soon — a post about the 2015 Seattle Seahawks including an overview of their most interesting characters as well as what fans expect from the team this year.

I recorded a podcast with a Seahawks fan (and a Chiefs fan.) Enjoy!