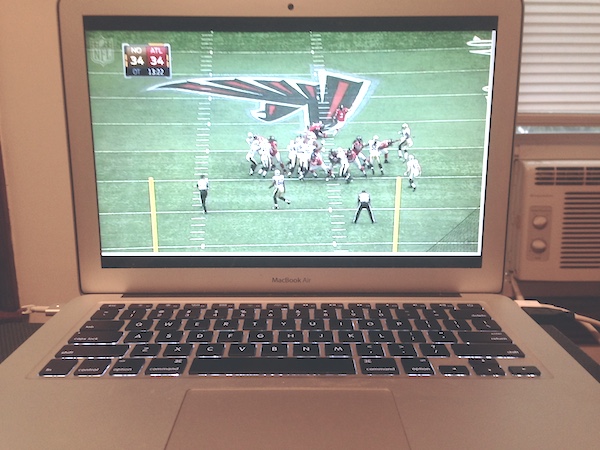 My husband is a giant football fan — not of the Giants though, of the Miami Hurricanes and Dolphins. And of course he plays fantasy football too. I like football just fine, but I don’t want it dominating my living room every day for the rest of the year. He gets pretty annoyed when I suggest not watching a game. How can my household survive football without going crazy?

Your dilemma is not an unusual one. For many people, the start of football season is an exciting time. For non-football fans who happen to live with housemates, friends, partners, spouses, parents, or children who are football fans, it can be a difficult time. There is a solution!

Once upon a time, football followed a predictable and limited schedule. High schools played on friday nights, (thus Friday Night Lights), colleges played on Saturdays, and the NFL played on sunday afternoon. Even the most die-hard of football fans were only occupied by their favorite sport for a somewhat reasonable percent of the weekend. Things are different these days. As of 1970, the NFL featured one game on monday night. In 1987, it added a game on sunday night. Beginning in 2006, the league colonized Thursday night, first only half the time, but now for the entire season. Meanwhile, college football has spread from Saturday to Tuesday, Wednesday, Thursday, Friday, and Saturday. It’s not just easy to watch football every day or night of the week in 2015, with dozens of sports channels on television and almost infinite availability of sports on the internet, it’s almost unavoidable. Football every night is not a recipe for domestic tranquility.

Luckily for football fans and for their families, friends, and loved ones, the steady march of time has not brought only the sports-entertainment version of middle-aged spread but also an approach to ameliorating its effects: the small screen! Televisions are no longer the only device capable of showing a football game. Games are available on computers, tablets, and even phones with close to no depreciation in quality compared to a television. At worst, you end up a minute or two behind — a slight annoyance that also carries a benefit as it forces you to get off twitter and stop obsessively checking your fantasy football scoreboard and actually enjoy the game. I find watching a football game on my laptop, particularly using the live TV app through my cable company, is almost exactly as enjoyable as watching it on television. The benefits for my partner are many. Using the small screen means that the living room (and dining room, because our apartment has an open floor plan) is still available for her use. It also conveys the message that I don’t think football is any more important than reading a book, doing a puzzle, sketching, or doing any of the other solitary activities that one might do while sitting in the same room as a family member.

As a member of a mixed household, it’s important for both (or all) sides to take peaceful cohabitation, or not going crazy, as you called it, seriously. The small screen is a valuable weapon in this fight. Use it wisely!

Thanks for reading and let me know how things go this season,
Ezra