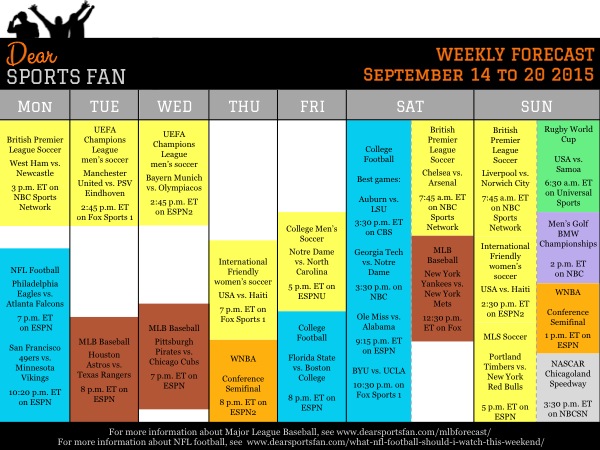 This does not include MLB baseball games. There are so many of those every day that another approach is needed. That approach is our special Daily MLB Forecast. Same deal, for the most part, with NFL football games. For those, see our NFL Forecast.

Tuesday: The UEFA Champions league is the biggest and best club soccer tournament in the world. Today’s best game features one of the top three British teams against one of the top three Dutch teams. In the evening, settle in for a Texan battle in Major League Baseball. The Rangers are only 1.5 games back from the Astros in the standings, so it’s an important game too.

Wednesday: Another Champions league game (this one between the top German team and top Greek team) and another important baseball game between teams scrambling for wild card playoff spots.

Thursday: Women’s sports take over for the day. At 7 p.m., catch the U.S. Women’s National soccer team play Haiti on their victory tour. An hour later, once the USA is up by 17 goals, switch over to an WNBA playoff game.

Friday: Date night! There’s not much to ignore today in the sports world, just some college soccer and a middling college football game. Go out, enjoy yourself!

Saturday: There are an enormous number of college football games and a bunch of them are really compelling this week. Four games match top 25 ranked teams against each other, so those are the four we featured in this calendar. Chelsea vs. Arsenal in the British Premier League is about as good a soccer game as you could wish for, and the battle of New York (often called the Subway Series) is actually relevant this year because both teams are in the playoff hunt.

Sunday: Wow, this is a full day of sports. On top of the oodles of NFL action, which you can get info later in the week on by looking at our NFL Forecast, there’s also a full day of soccer. Start in the morning in England, move to the United States for a women’s international friendly in the afternoon, and they stay in-country for a Major League Soccer game at 5 p.m. If you’re not into football of either sorts, you can feast on early morning rugby, a golf championship, a WNBA playoff basketball game, and a NASCAR race!