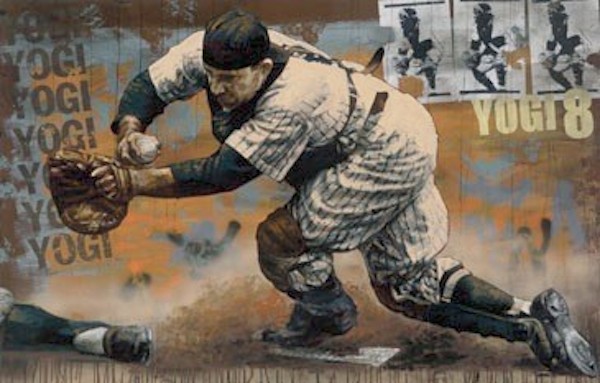 Famed baseball player, manager, and cultural figure Yogi Berra died last night at the age on 90. There are countless obituaries and remembrances of him today. I’ll list a few of them at the bottom of this piece and I encourage you to spend a few minutes learning more about him. But for Dear Sports Fan, the question I asked myself about Yogi was, “is there some aspect of his story that you need some type of specialized baseball knowledge to appreciate?” The answer is yes. Yogi Berra was a catcher, and given his position as a cultural icon, a source of folk-wisdom and self-deprecating wit, he could really only have been a catcher.

To be a successful catcher, one must be a talented and diligent student of humanity. Someone who doesn’t know baseball might think that the most important qualities for a catcher are strong knees to withstand all the crouching and fast reflexes to be able to field 100 mile per hour pitches. A catcher’s job is much more subtle and complicated than that. Catchers are the primary person responsible for deciding what pitch a pitcher should throw every time he winds up. Most pitchers have a variety of pitches they can execute: a fastball – which generally flies straight, an off-speed pitch, which looks like a fastball but fools the batter by arriving at the plate a beat or two later than he expects, a curveball, which dips dramatically down as it approaches the plate, a slider, which moves down and to one side. Each of these pitches can also be thrown so that they cross the plate at the center of the strike zone, high, low, inside (toward the body of the batter), outside, or outside of the strike zone in any direction as well. The trick to getting a batter out is to literally trick her by choosing a combination of pitch types and locations that she doesn’t expect and cannot react to. A catcher needs to know the tendencies of each batter and be able to read their state of mind as they walk up to bat and throughout the time they’re there. What was the impact of that last fastball thrown low and outside? Will the batter be fooled by a change-up thrown in the same location or are they now expecting us to try that trick? If they’re expecting it, can we fool them by throwing another fastball in the same spot? At the same time, a catcher has to manage his relationship with the pitcher. What is his mind-state? Is he confident? Shaken? Fatigued? Angry? What will motivate him to throw harder? More accurately?

A great catcher possesses an incisive understanding of his teammates, his opponents, and himself. He is a student of humanity. As we know from his many pithy quotes, whether he said them or not, Yogi was one of the best students of humanity ever. It’s no surprise that he was a catcher. It almost had to be that way. If this understanding of the role of a catcher in baseball is new to you, then you may now understand what Yogi meant when he said of baseball, “90 percent of the game is half mental.” Actually, on second thought, you might still not.

To continue to celebrate Yogi’s life, here is a small selection of the many articles and obituaries published this morning: