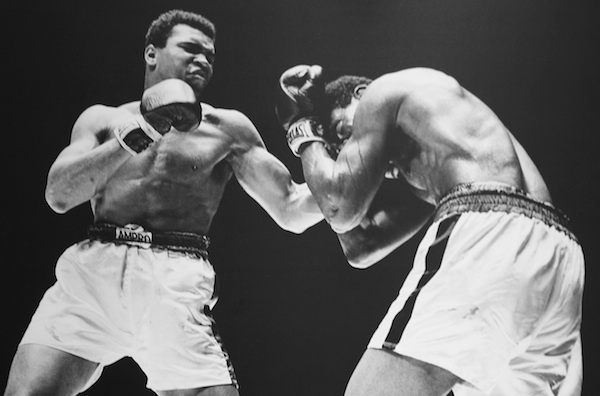 The phrase “roll with the punches” comes from boxing, where athletes are literally in the business of punching and getting punched. Although many people think of boxing as the ultimate aggressive sport, defense is as important or perhaps even more important than offense. If a boxer can develop techniques to defend themselves from being hit or being hit hard by their opponent, they are well on their way to winning the fight. Rolling with the punches is one defensive option in boxing. What I love about how the expression has moved from its sports context into general use is how precisely the meanings line up with one another. The parallels are almost poetic once you see them. Here’s how rolling with the punches works in boxing.

Getting hit is inevitable in boxing. Oh, sure, boxers are taught to protect themselves with their hands, so punches land harmlessly on padded gloves instead of chins, noses, or stomachs. And yes, dodging a punch is a great idea too. But eventually, every boxer is going to get hit right in the head. This is when the smart boxer rolls with the punch. As they see or feel the punch coming, they move their head or body so that it’s moving the same direction as the punch. If a punch is coming at their head from their left, they move their head backwards and to the right. Watch Mohamed Ali demonstrate with two classic rolls:

This allows the body to arrange itself into an alignment that’s used to moving and proper for moving in the direction the punch will inevitably send it. This protects the boxer from the most damaging element of being hit – the sudden rotational force applied to the brain. This rotational force is what generally knocks a boxer out and causes the worst brain damage. If you watch fights, it’s usually the punch that a boxer doesn’t see and therefore can’t prepare for that knocks him or her out. The head snaps backwards or sideways and you know the fight is over.

Rolling the spot that’s going to get hit with the expected force of the punch protects a boxer from being surprised in this way. If you don’t believe me, take your hands and put them out and up in front of you with your elbows bent and your palms faced out. Get a friend to punch your hands a few times. Experiment with trying to keep your arms rigid (it hurts, right) and then letting your arms go loose and your hands give way as your friend punches them. It hurts a lot less, right?

The beautiful part of this is that in boxing, as in life, every one is going to get hit. If you can find a way to prepare yourself, not with fear or rigid resistance, but with calm acceptance, you can learn to live through most of what the world has to throw at you.