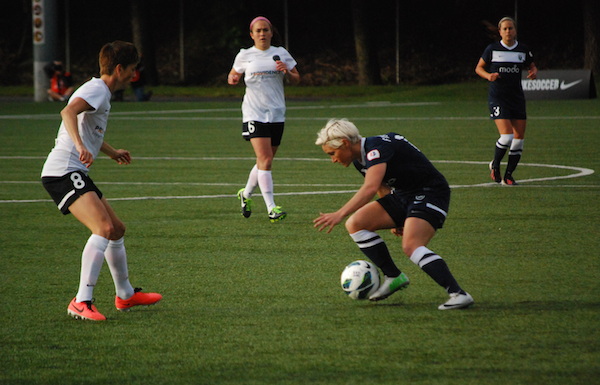 The 2015 NWSL championship game between the Seattle Reign and FC Kansas City is tonight, Thursday, October 1 at 9:30 p.m. ET on Fox Sports 1. Here’s everything you need to know about the game.

This is not just a single elimination championship game, it’s also a rematch. These two teams met last year in the 2014 NWSL Championship game, which FC Kansas City won 2-1. The Reign came back better than ever this year and have been at the top of the standings basically all year. During the 20 game regular season, the Reign only lost three games. They won 13 of the other 17, tying the other four. This record put them head and shoulders above the rest of the league. Of the other eight teams, not a single one was able to break double-digits and win even ten games. FC Kansas City came in third place this year, the lowest showing ever for this freakishly consistent team, but did have the second highest tally of wins with nine.

Both teams are built around strong defensive play. Both teams have excellent goalies and strong, cohesive defensive units. Of the eight defenders in the NWSL honored by being selected to the league’s Best XI or Second XI (imaginary starting lineups voted on by NWSL journalists, club officials, and players), a whopping six of them will be playing in this game, three from each team. It’s from the midfield up that the teams start to differ. The Reign’s offense is driven by an overwhelmingly talented group of individual stars in the midfield who have found a wonderful balance playing together. FC Kansas City is a more traditional offensive team built around a wonderful partnership between a playmaking midfielder and an opportunistic striker.

Neither team was challenged very much in their semifinal matches. Although the Washington Spirit were able to hold the Reign to a 0-0 tie for the first three quarters of their match, this was mostly thanks to an incredible effort on the part of their goalie. The Spirit never really threatened to score and eventually the Reign broke through their bunker. Once they scored once, they just started scoring, and it was 3-0 when the game ended. FC Kansas City also won their semifinal by that same score. They jumped on the Chicago Red Stars early, thanks to an unforgivable blunder by the Red Stars keeper. This changed the dynamic of the game and ended whatever chance the Red Stars might have had to play the game on their terms. Kansas City never let up and won in comfortable fashion.

The Seattle Reign are looking for revenge for last year’s championship loss to Kansas City and simultaneously expecting a coronation after being the best team in the league all season. FC Kansas City will be playing for their teammate, Lauren Holiday, who is retiring after today’s game. She wants to go out with a victory and her teammates want her too even more.

Who are the players we know from the U.S. women’s national team?

FC Kansas City has four players from the USWNT:

Who are some other players worth knowing about?

On the Seattle Reign:

Look at the angle Rodriguez chooses to run into space between defenders without going offside. Holiday does a great job getting her the ball but Rodriguez should get the lion’s share of credit for this goal.

The second goal involves the same two players but is a different story. Lauren Holiday breaks off just an insane series of brilliant dribbling moves to create this goal. Watch her slalom between defenders before dropping the ball for Rodriguez to easily slot into the net.

Seattle fought back, and did eventually score, but it was too little, too late to catch FC Kansas City.

What else can I learn about the game?

Read Liviu Bird’s championship preview for Sports Illustrated’s Planet Futbol and Lauren Barker’s similar but even more comprehensive article for SB Nation. Graham Hays has five key things to watch for in the game, which he shares with us on ESPNW. Equalizer Soccer brings us a blog post by goaltender Hope Solo in which she describes and thanks each of her Seattle Reign teammates. Finally, listen to Five Thirty Eight’s Hot Takedown podcast. They bring on soccer fan and expert Alison McCann to talk about the current state and future potential of the NWSL.

What’s going to happen this time?

First of all, it’s going to be a great game. Most NWSL matches frankly don’t reach the heights of a World Cup match, but this one will. These two teams are packed with talent and have played together for longer than most national teams get to. They are supremely determined to win. My guess is that this is a scoreless game going into the 75th minute of play. At that point, with the tension ratcheted up as far as it can go and player’s legs starting to get tired, it will come down to which team makes the first mistake and which team can capitalize on it. FC Kansas City and the Holiday to Rodriguez combination is great, but the Reign simply has more options; more ways to score and win. The Seattle Reign comes out on top, 1-0.