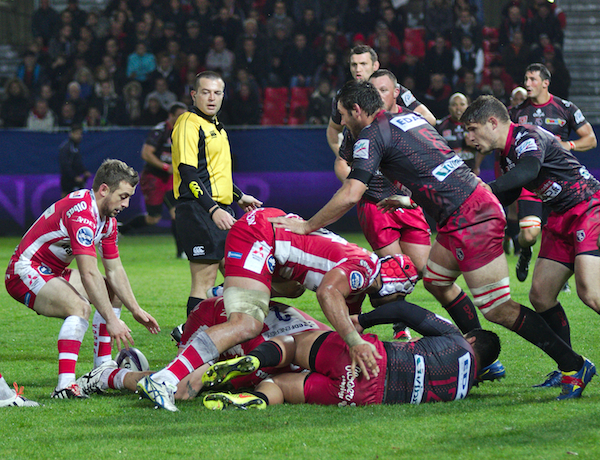 This past weekend, I watched the championship match of the Rugby World Cup, which New Zealand won, 34-17 over Australia. The whole experience was great. Rugby is an awesome sport, full of athletic brilliance and suspense. I also love getting a chance to experience the titillating confusion one gets from engaging with an unknown sport. One of the most striking parts of rugby was the level of respect between the players and the referee. Particularly as someone who has played and watched soccer my entire life, I was astounded at the culture of respect rugby has managed to create. Soccer and rugby are quite similar sports, but the relationship between player and ref is so broken, so fractious, so disrespectful in soccer, that I couldn’t believe how good it was in rugby. What accounts for the difference? Is there something integral to the sport that makes soccer so unhealthy and rugby so healthy? Is soccer doomed to stay that way?

Soccer refs are petty dictators. They’re all-powerful and within the context of the game, completely unaccountable to anyone for anything. Yes, they have two or three linespeople/assistant referees, but those people are there only to provide information to the ref, every decision is hers to make alone. Even something as integral to the game as how long it lasts is controlled completely by the ref. Refs have total authority and their decisions are extremely important. Because soccer is such a low-scoring game, a ref’s decision to grant or not grant a penalty kick is often the difference between winning and losing. Likewise, a decision to give a yellow or red card can be vitally important.

Rugby refs have as much power as soccer refs but they’re infinitely more accountable and their decisions are slightly less important. Rugby is a higher scoring sport, which reduces the importance of most penalty calls. Rugby also does away with soccer’s silly insistence on living in a world where only the ref has the official time. Rugby refs can stop the clock but they do not control when the game is over. Red and yellow cards work similarly in rugby as in soccer, but because there are 15 players on the field, losing one for ten minutes (a yellow card) or the rest of the game (a red or two yellows) is not quite as big of an impediment to winning as it is in soccer. These technical differences pale in comparison to the major difference – refs wear body cameras, microphones, and ear pieces. What they say is constantly broadcast to television audiences and they are in dialogue with a replay official who can assist on penalty calls or even alert the ref of something he did not see. Video from their perspective is available to people watching on TV.

Let’s examine what happens when there’s a close, important penalty call to make in each sport. In soccer, a ref must make the call based only on what she sees, perhaps with some basic assistance from a linesperson who waves his flag if he believes there’s a foul. Soccer refs believe there’s an imperative to make the call quickly and decisively, so that they maintain order and continue to inspire respect from the players. They don’t need to explain their call to anyone, definitely not the players. Rugby treats this situation almost completely oppositely. Rugby refs don’t need to make a call only by memory and with an instant decision. They can stop the game, consult with their assistant refs on the field, watch video of the play, and ask the opinion of a video replay official. Although soccer has not implemented video replay, many American sports have. You can split them into two groups: baseball and hockey have centralized video replay offices that make the decisions when a play is reviewed; in basketball and football, the on-field refs watch video on court side or side-line video monitors and then make the decisions themselves. Rugby blends these two approaches. There is an off-field replay official, but she is there in a consultative role. The ref makes the final decision, based on video he sees. The major difference is this — the entire process is transparent! Audio from the conversation between the two officials is broadcast live on television and instead of running over to peer at a small and private video monitor, the ref reviews video using the stadium’s jumbotron screen, which both teams and the entire stadium audience can follow along with. There are no secrets about the process. By the time the decision has been made, everyone knows how the referee came to that decision.

Look at these videos to see the difference these two processes make.

First, a red card given to Jermaine Jones, a New England Revolution soccer player, after the ref misses an obvious red card.

Jones is understandably furious – not just because the ref should have seen and penalized the hand ball, but also because he knows that soccer rules offer no chance for reviewing this vitally important call. With such little respect between ref and player, there’s no choice for the ref but to throw Jones out of the game.

Compare that to an important call during the Rugby World Cup championship game (alas, this is not available on YouTube, but click this link and head to the 1:40 mark.) Ref Nigel Owens is making a decision about whether to give a New Zealand player a yellow card, forcing him to miss 10 minutes and his team to play a man down. He reviews the call on the video screen in the stadium and confers with his replay assistant. Once he makes his decision, he explains it to the player. He says that the evidence was “not marginal” and that the offense committed is a yellow card offense. He even ends his sentence with a rising, “okay?” seeking affirmation from the player for the decision. Almost unbelievably (to a soccer fan) the player nods, says okay, and heads off to serve his ten minute penalty. The two team captains stand alongside the ref, witnessing and validating the entire interaction.

Quick note — Nigel Owens is widely thought of as the world’s best rugby ref. He’s also gay. It doesn’t seem like a big deal, which is another giant difference between rugby and soccer. He’s also hysterical. Here’s a video of him chiding a player who was trying to affect his calls by reminding him that “this isn’t soccer.” And another of him making fun of a player’s line-out throw (which is supposed to be straight) by referring to his own sexuality.

Fixing soccer’s referee player interactions would be a big enough victory to look for in and of itself, but soccer’s culture of distrust and disrespect has wider implications. One example, and an important one, is the treatment of head injuries. In both soccer and rugby, once a player is substituted out, he cannot return to the field. This makes dealing with a suspected head injury tricky. Removing the player for a proper assessment means either playing at a numerical disadvantage or substituting and losing that player for the rest of the game, even if she doesn’t have a brain injury. Rugby has solved this problem neatly by allowing temporary head-injury substitutions so that players can be assessed and then return to the field if they are cleared without their team’s having to play down. The argument against this solution in soccer is that players could pretend to have a head injury to gain their team an extra substitution. It’s true that rugby teams are allowed eight substitutions compared to soccer’s three, so the incentive to cheat to gain another sub is less in rugby than in soccer, but I think the bigger difference is cultural. Soccer’s culture of distrust, which stems from its player referee interactions bleed over and make it more difficult to transform the game to be safer for its players.

So, where does soccer’s culture of disrespect and distrust really come from? Are ref player interactions really the source of all of this? I doubt it. You need look no farther than its governing body, FIFA, and the rampant corruption which is only now being addressed by international law enforcement. If soccer refs are the symbol of soccer authority and the top soccer authorities are almost unanimously worthy of incarceration, why should we expect players to respect refs?