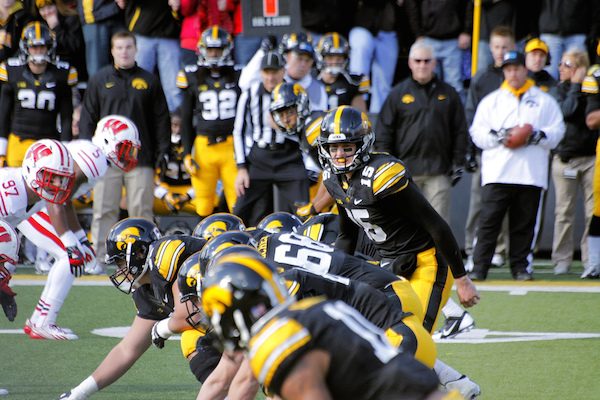 What is an audible in football?

One of the things that separates football from most other sports is the degree to which its coaches control the action. Football stops and starts all the time, and each time it does, coaches on both sides have the opportunity to tell their players what to do. In the NFL, coaches are actually able to talk between plays through a microphone to one offensive player on their team and one defensive player. These players are identified by having a small green dot on their helmets. These messages from the coaches to their players are simple codes that refer to plays which the players have learned in practice. Each one is complex enough to tell each of the eleven players on offense or defense what to do during the upcoming play. All of this happens quickly, in ten to fifteen seconds, and then the two teams run to the line of scrimmage and set up opposite each other. Here’s where things get interesting and where the audibles come into play.

Once the two teams set up to run their plays, as pre-determined by their coaches, a new and vast array of information is available. The offense can see where the defense has lined up. The defense may be able to guess what the offense is going to do. The problem for football coaches is, at this point, they are no longer able to talk to anyone on the field. Some coaches, usually in college football, get around this by having their players set up, pause, and then look to the sidelines where the coach will be signaling a new play to them through some large visual code that is easily understood by them but complex enough to mean nothing to their opponents. Most coaches, especially at the professional level, simply trust a player on the field to decide whether to change the play or go with the original one. If a player on the field (always the quarterback on offense and often a linebacker on defense) decides to go with a new play, that play and the process of deciding to change the original call and communicate that decision is called an audible.

As you may have guessed from the word, audible, which also means something you can hear, the change to the original play call is usually accomplished by SHOUTING! The quarterback on offense or the designated player on defense will scream a new instruction to their teammates. This instruction, like the original play call, will be in code so the other team can’t figure out what it is. Screaming is the easiest way to perform an audible but it’s not always possible. Football crowds are wise to the advantages easy audibling gives an offense, so when the opposing team’s offense is on the field, especially during important third downs or at the end of games, the crowd will scream as loud as they can to make audible audibles impossible. When this happens, a team will revert to hand signals to communicate. Audibles are still possible but the chance of miscommunication is greater.

One amusing element of audibles is that quarterbacks will often scream fake audibles just to make the defense wonder whether the quarterback has seen something nifty and is changing the play to take advantage of it. This adds some of the chatter we often hear from quarterbacks, like Peyton Manning’s famous “OMAHA!” What’s a real audible call one game or series may be a fake one the next. If all this sounds confusing, it is! It’s just one of the small things that makes playing football such an intellectually as well as physically challenging feat. You can understand how football players might want to pause the game and just ask whether an audible is real or not. They don’t do that though, at least… almost never. A microphone at a recent NFL football game caught a Carolina Panther asking quarterback Cam Newton if the audible, “Even Janitor” was a real thing. This is what it sounded like: