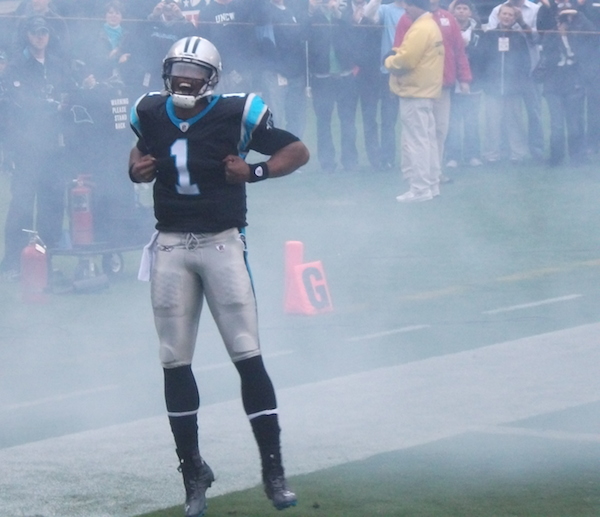 The Panthers are expected to win. For a Super Bowl which matches the top seeds in each conference or half of the NFL, and therefore should be a relatively even match-up, this belief is remarkably widely held. One way of telling this is to look at the line Vegas set for the game and what happened to it. If you’re not someone who understands football betting, this post provides good background. The line opened (was first set) with Carolina as a three point favorite, suggesting that Vegas thought Carolina was three points better than Denver. Over the two weeks between when this line was set and now, so many people bet so much money on Carolina, that they actually moved the line so that Carolina was favored by five or five and a half points. Remember that the goal of a line-setter is to get half the money on each team so that no matter who wins, the bookies can basically pay the winners on one side with money from the losers on the other and pocket the transaction fees from both sides. When too much money comes in on one side, like it did for Carolina, Vegas will move the line so that it’s more favorable to bet on the team getting fewer bets. Even if you think Carolina is going to win the game, it’s much more attractive to bet on them when they only have to win by four points (Carolina by three means they need to win by four for a bet on them to pay out) than when they have to win by six points for you to win. The line moving so far is a sure sign that most people think that Carolina is going to win fairly easily. So, why are people so sure? We’ll examine the game in two phases — when Denver has the ball and when Carolina does — and try to explain the challenges Denver faces on both sides.

Denver’s offense is likely to struggle against Carolina for one main reason: their quarterback, Peyton Manning, is a shell of his former self. Manning is 39 years old, near-ancient for a football player, and he had neck surgery a few years ago. This has left him with a severely under-powered arm (for an NFL quarterback, for a normal person, he’s still a super hero,) and with little to no feeling in the fingers of his throwing arm. That he’s able to play at all is incredible but it doesn’t change the fact that his shortcomings will become his team’s shortcomings. Manning finds it difficult to throw deep down the field to his wide receivers. Alas, that’s the strength of one of his top two receivers, Demarius Thomas who is now less effective. More importantly, opposing defenses know Manning is less effective throwing downfield than he used to be, and they set themselves up accordingly. The Panthers, who also have one of the best one-on-one defenders in the league, won’t waste too many players defending deep passes. This leaves them free to concentrate on stopping or limiting the effectiveness of the two other things an offense can do: run and pass short. Carolina’s defense is hell on offenses trying to do these things at the best of times, but they’ll be downright Cerberus-like against a team they know can only do these things. Carolina has two excellent giant defensive tackles who will disrupt the Broncos running game, mostly by making it impossible for Denver’s offensive line to create clear areas for their running back to sneak through. When a running back does sneak through or when the Broncos circumvent the Panthers linemen by completing a short pass, the ball-carrier is unlikely to get far because of the Panthers swift linebackers who will flow toward the ball-carrier during this game with a ferocity and speed matched only by you or me headed toward the chip and dip at our Super Bowl parties. It’s hard to imagine Denver scoring many points on offense because it’s hard to imagine how they’ll find ways to gain more than five to seven yards on any single play.

Denver has made up for their deficits on offense all year by having the best defense in the league. Alas for Denver supporters, it seems like Carolina was designed specifically to thwart everything Denver is best at on defense. Denver excels at attacking their opposition’s quarterback. They’ve been able to hit, tackle, sack, and fluster almost every quarterback they’ve come across. They haven’t played anyone like Carolina’s quarterback Cam Newton though. Newton is not only enormous (6’5″ 245 lbs) but he’s also a normally unflappable person on the best streak of his career. If that weren’t enough, he is also an expert executor of the “read-option” offense. This tactic looks like a normal running play but gives the quarterback the option to look at how the defenders are reacting (read them) and then decide (because they have the option) to hand the ball off to the running back or keep it himself and run or throw it. At best, this tactic slows down opposing defenders. At worst, it leaves them bewildered and frozen in their tracks. Having the read-option in their back pocket and a physical, unflappable quarterback to run it, will make Carolina resistant to Denver’s defensive edge rushers. Denver has also been able to shut down opposing wide receivers all year with their combination of great defensive backs. Unfortunately, Carolina’s best pass-catcher is not a wide receiver, but a tight end — Greg Olsen. Denver did a great job on New England Patriots tight end Rob Gronkowski in their last game but it is an area they’ve been (relatively) vulnerable to all year. Denver still has a great defense that will find ways to make life hard for Carolina, but because of how Carolina’s offense works, they will be less affected than nearly any other team would be.

Usually there’s more suspense at this point in the post (and the football season,) but given the thrust of this article, it’s hard to generate much. The Carolina Panthers are going to win. I just hope the Broncos can put up enough of a fight to make the game interesting! I think they will. Their formidable defense will find ways to frustrate Carolina’s offense, who it must be admitted, have not faced much adversity so far this year. Given a few lucky bounces and perhaps a lucky injury or two, the Broncos could just sneak through and find a way to win in a low scoring game… but they won’t. Panthers 22, Broncos 16.