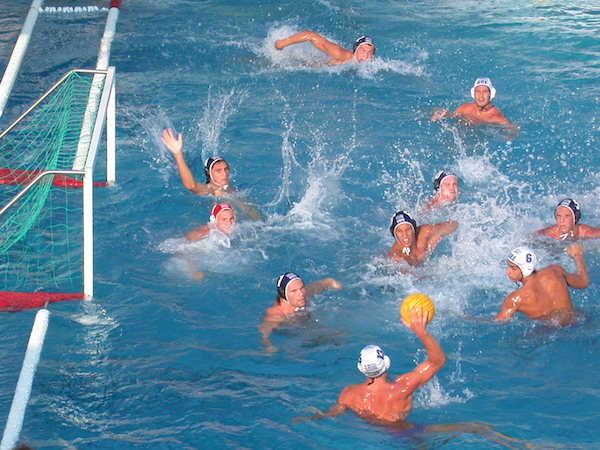 All About Water Polo

Water Polo is my favorite Olympic Sport. Why? It combines so many great elements of what I like in other sports into a mysterious and confusing yet riveting package. Some of its elements, like what the point of the game is, who is on what team, and how to score, are intuitive. Others, like what all the whistles mean and how is it possible to play this sport without drowning, are a source of wonder!

How Does Water Polo Work?

Water Polo is a team sport played with seven players on each team in a rectangular pool around six feet deep. At either end of the playing area in the pool, there are two rectangular goals with nets, like miniature soccer goals. These goals are three meters wide and a little less than a meter (90 centimeters) high. Players try to throw a ball, about the size of a soccer ball, into this net. In the pool at any given time are six regular players and one goalie. Unlike soccer, all the players can use their hands (just try to use your feet in a pool!) but goalies are the only ones who can punch the ball, catch it or block it with both hands, and touch the bottom of the pool. Games are 32 minutes long divided into four eight minute quarters. If that sounds long to you, you’ve stumbled onto the essential truth about Water Polo. It is HARD WORK.

Water Polo players are the toughest athletes out there. Imagine spending half an hour swimming as fast as you can back and forth in a pool, interrupted only by periods of treading water during which you’ll have to churn your feet and legs fast enough to propel your upper body out of the water to catch or throw a pass or shoot. Meanwhile, there’s another team that’s basically trying to drown you in order to get the ball back. It’s pretty amazing. Water Polo is not an anything-goes sport, there are refs, and there are rules (although they’re mostly inscrutable to beginners) but there’s only so much that refs walking on the concrete next to the pool can see. During the last Olympics, NBC installed under-water cameras and the rough play (and unintentional nudity) was impressive.

Well, since I said this was my favorite Olympic sport, I should say why I like watching Water Polo. First, it’s a lot like many of the other sports I love — soccer, ice hockey, basketball — but in a different setting. The fact that it’s played in water makes it different in interesting ways. First, the relative speed of passing and swimming is much different than that of passing and running or skating. This changes the tactics of the game. Secondly, the constant swimming adds an element of toughness to the game that I enjoy — I can’t imagine swimming for that long without touching the bottom, much less playing a game, much less playing a game where people are trying to drown you! It’s tough and crazy and impressive.

Water Polo is just Water Polo — there is only one event – with medals for men and women.

How Dangerous is Water Polo?

Water Polo players are extraordinarily strong and take a lot of punishment during an average match. That said, injuries are relatively rare. The most common are shoulder injuries, thanks to the inhuman speed with which players throw the ball on top of already fatigued muscles from swimming. Other than that, errant (or aimed) elbows and fists can leave a mark, and scratches are a fact of life.

What’s the State of Gender Equality in Water Polo?

Meh. Men and women basically play under the same rules. Women are often put in a slightly smaller pool though. In this Olympics, there are 12 men’s teams competing and only eight women’s teams. This is a classic vicious cycle of there being less support within countries for women’s sports which gives international competitions cover to accept smaller fields which discourages more countries from investing in women’s sports.