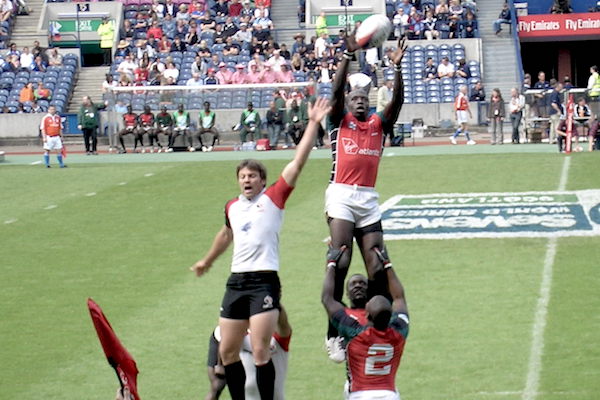 All About Rugby Sevens

Traditional rugby is an awesome game. If you’ve never watched it, you should. With fifteen players on each side, it has tactical complexity that outpaces most other team sports. At times, the players form into clusters that move together and look like nothing more than independent alien life forms. The problem with rugby as an Olympic sport, however, is that it is thoroughly dominated by a small group of countries — mostly the UK, its former colonies, and France. Their dominance is so severe that it would be hard for many other countries to field competitive teams. Rugby Sevens is a scaled down version of the sport that is arguably more exciting and inarguably more accessible around the world. This is the first Olympics that Rugby Sevens will be an event in.

How Does Rugby Sevens Work?

Rugby is a territorial game, like American football, where teams try to move down the field, and eventually end up in their opponent’s end zone with possession of the ball. It is a rough and tumble sport. Tackling is allowed, but players are not allowed to tackle above the shoulders or hit their opponents without wrapping them up with their arms. That’s one big difference between rugby sevens and American football. Another one is that players are only allowed to pass the ball backwards to a teammate — no forward passes allowed. Unlike American football, rugby sevens doesn’t stop between each play. There are brief pauses in the action when a player is tackled to the ground, but the play is only constrained by rules that come into effect at these moments, not completely stopped. One of the amazing aspects of this variant of rugby is that the organizers of the game reduced the players on each side from 15 to seven but did not reduce the size of the field at all! This gives players so much room to work with that spectacular offensive plays happen much more frequently. Games are short (two seven minute halves) and exciting. Teams can score by running into their opponent’s end of the field and placing the ball on the ground. This is called a “try” and is worth five points. After a try, the team that scored gets to attempt to kick the ball through the uprights for an additional two points. If a type wins a similar kick from a penalty or if it tries to drop kick the ball during active play, those kicks would be worth three points.

Rugby sevens is a great spectator sport. It’s short, so it doesn’t require much of a time commitment. It’s close to non-stop action (half-times are only two minutes). The play is sudden and surprising and violent. The players are admirable for the mixture of respect and brutality with which they play the game.

Check out some highlights:

Easy, peasy, lemon squeezy: Rugby Sevens has a men’s event and a women’s one.

How Dangerous is Rugby Sevens?

I don’t want to diminish the danger of rugby sevens. It’s one of the most violent Olympic sports and its athletes brave all sorts of injuries. From twisted knees and ankles to unintentional but common head wounds to broken ribs and fingers, rugby sevens players take and dole out a lot of damage. It takes a lot to get a rugby sevens player out of a game, but it does happen. On the other hand, for as violent a sport as rugby sevens is, the looming threat of brain injury that is so present in American Football and ice hockey is much less present here because of the tackling rules.

What’s the State of Gender Equality in Rugby Sevens?

The gender equality of this newest sport to be added to the Olympics is near perfect. The game does not differ between its men’s and women’s events and the uniforms actually tend to be much tighter on the men’s side than the women’s. 12 teams will compete for women and the same number for men.

Bookmark the full Olympics schedule from NBC. Rugby Sevens is from Saturday, August 6 to Thursday, August 11.