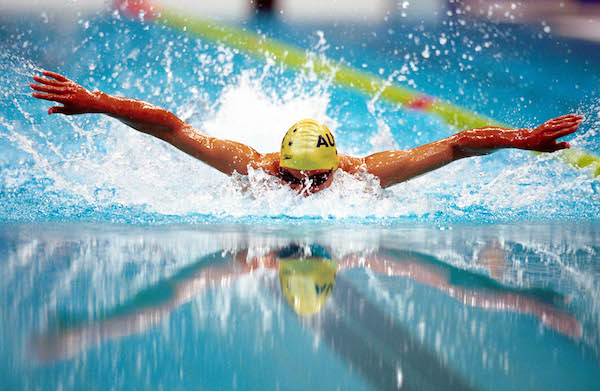 Every four years, the world focuses its attention on the Summer Olympics and is momentarily fascinated by people swimming. These simple races, with even the fastest Olympians traveling slower than the average person walks, are the site of some incredibly feats of sudden strength, sustained endurance, and hair-splittingly close margins of victory.

How Does Swimming Work?

One of the features of swimming from a viewer’s perspective is how simple it is to understand. A bunch of people start in one place, swim back and forth in a pool (or in one case, the open and questionably safe water off Copacabana beach,) and whoever completes the required distance first, wins. That simplicity belies an enormous amount of detail that goes into these races. Many of them require different ways of swimming, called strokes. The four main strokes are front-crawl, backstroke, breaststroke, and butterfly. Breaststroke is the most familiar of the strokes. In it, swimmers stay on their front, push their hands together out in front of them, and then divide them, and push back to their hips before bringing them forward together again. Legs kick in a frog-like manner. In front crawl swimmers are also front down in the water, but the arms move separately in long windmill like motions all the way forward, almost parallel to the body, back downward to the hips and then forward again. While one arm is moving to the hip, the other swivels forward. Meanwhile, the feet are kicking like crazy in a flutter-like motion. Front-crawl is the fastest of the strokes. Backstroke is basically front crawl but done flipped over, with the swimmer on her or his back. The last stroke, butterfly, is what happens if you try to do front-crawl with both arms moving together instead of alternating. If you’ve ever tried this, you probably know that this movement naturally propels the swimmer down into the water. Butterfly swimmers compensate for this by bucking their entire bodies up in the water at each stroke. It is exhausting and slow, which makes Olympic butterfly incredibly impressive. One fun fact about Olympic swimming that pertains to strokes is that there are no front crawl races. The times when you see swimmers doing that stroke are when there are freestyle races that allow any stroke. Since front crawl is the fastest, everyone always chooses to do that, but a swimmer could theoretically do a different stroke.

The races are mostly individual ones organized into preliminary heats that qualify swimmers for a single finals race. Most of these races involve one stroke but a couple require swimmers to do all four strokes consecutively. These are called medleys. Some races are team races called relays. During a relay, one swimmer races until they’ve swum a particular distance (1/4 of the entire distance of the race, because there are four team members) and, once they touch the wall, the next swimmer on the team dives in. The team that finishes first wins.

Even describing how swimming works, it feels a little silly to remember how much fun it is to watch. It doesn’t seem like something one would be happy spending hours watching, but it is. Why? I think a big part of it is the joy one gets from watching almost perfectly efficient bodies in motion. When you or I swim, we probably thrash around a little in the water on our way from point A to point B. Not so for Olympic swimmers. Any motion that doesn’t propel them forward is a wasted motion and is carefully removed from their stroke during hours of practice. What’s left is a smooth, beautiful stroke. Even swimmer’s bodies at this level seem to have been chosen for efficiency in the water. Another thing I love is that for some reason, swimming under water is faster than any stroke done at the surface. Swimmers in any stroke are allowed to swim under water only at particular times — when they first dive into the pool and when they turn at the wall of the pool. So, they all try to stay under for as long as they possibly can. Some swimmers can just do this longer than others; maintaining lung capacity and control even when exerting themselves massively. A swimmer with great control in this way can make time up against an otherwise faster swimmer at every turn. It makes races less predictable and more exciting.

“There are a lot of swimming events in the Summer Olympics. A plethora. There are individual events at different distances in breast stroke, back stroke, butterfly, and freestyle, which we now know means that everyone chooses to do front crawl in. There are freestyle relay events for men and women at 100 meters (there and back once) each for a total of 400 meters, and 200 meters each (800 total). There is also a 100 meter medley relay in which each of the four team members swims 100 meters using one of the four strokes. There are also 200 meter and 400 meter individual medleys.

Lastly, and I forgot to mention this in any earlier swimming sections, there is a swimming marathon event. It’s not 26.2 miles, but swimming 10 kilometers (6.2 miles) is roughly an equivalent feat. This race is held in open water, which makes it even more difficult. Open water swimmers have to deal with currents, waves, and assorted competitors’ elbows, knees, and feet coming at them.”

How Dangerous is Swimming?

Thankfully, none of the swimmers at the Olympics will have just had lunch, so it’s not that dangerous. Ha. Jokes aside, swimming is not a dangerous sport. In fact, because the water allows for movement with less resistance, swimming is often something doctors or physical therapists prescribe for rehabilitating injuries. Now, I’m pretty sure they don’t want you out there going for it like Katie Ledecky, but the principle still holds.

The only swimmers to worry about at the Olympics are the marathon open water swimmers. This is particularly true in 2016 because the water they will be swimming in is rumored to be full of gross and toxic sludge. Eeek.

What’s the State of Gender Equality in Swimming?

Almost perfect. There are 34 events, 17 for women, 17 for men. 16 of those events have a women’s version and a men’s version that are identical. The one exception is the longest distance freestyle event. For some reason, even though women swim the 10 kilometer marathon event in open water, the powers that be in swimming have decided that women should have an 800 meter freestyle event while the men should have a 1,500 meter one. I don’t get it, and I feel sure this will change in some future Olympics. Once it does, swimming will be a perfectly balanced Olympic sport.

Bookmark the full Olympics schedule from NBC. Swimming is from Saturday, August 6 to Tuesday, August 16.

Read more about swimming on the official Rio Olympics site.