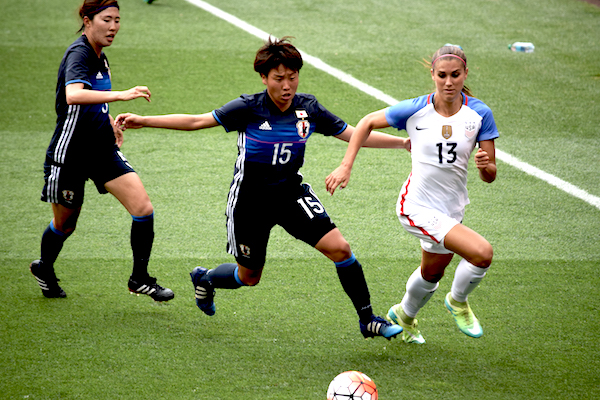 The last we heard from the United States Women’s National Soccer team on a world stage, they were grinning ear to ear and getting showered with confetti after dominating Japan to win the 2015 World Cup. Only a year later, that team is gone, replaced by a new one that’s (believe it or not) younger, deeper, and stronger. The United States entered the 2015 World Cup as one of the three or four favorites along with Germany, France, and eventual runner’s up, Japan. Five Thirty Eight actually predicted that Germany was the slightly stronger team. The situation coming into the Olympics is different. The United States is perceived as being way ahead of its rivals — expected to win the gold medal. So, what happened? Is this simply a case of recency bias? Are we blinded by that last image of our triumphant heroes? What, exactly has changed? To answer these questions, let’s take a quick look at each unit on the soccer field – goaltenders, defenders, midfielders, and forwards.

Hope Solo is still the best goalie in the world, and her backup, Alyssa Naeher has a reasonable claim at being second. Gone from the World Cup roster is Ashlyn Harris. This is no knock on Harris, but Olympic rosters are only 18 players as opposed to 23 for the World Cup, so there’s no reason to carry three goalies. The United States will have an advantage in goal versus every team they play in this tournament.

The 2015 World Cup team was quietly led from behind by a near-unbreakable back four. Center backs Becky Sauerbrunn and Julie Johnston anchored the unit while Meghan Klingenberg and Ali Krieger womaned the wings. They were awesome! I wanted to make helvetica style t-shirts with just their last names on the front. Amazingly, just a year later, one member of this fearsome foursome has been supplanted in the starting lineup. Ali Krieger has been replaced by Kelly O’Hara. You may remember O’Hara from the World Cup semifinals against Germany. She came into the game as a sub (apparently Coach Jill Ellis described her own decision making process as, “we need a bitch, get O’Hara”) and scored a goal in the 84th minute to salt the game away. O’Hara is a more attack minded player than Krieger (she was on the World Cup roster as a midfielder) and her ascension to the starting lineup is partially a recognition that the United States is likely to be doing a lot more attacking in this tournament than actual defense. O’Hara is also five years younger than the 32 year old Krieger, and it’s just possible that she’s a step faster at this point. Krieger will be joined on the bench by the smooth defensive defender, Whitney Engen. Engen was on the World Cup roster as well but didn’t get into a game. Gone are elder stateswomen Lori Chalupny and Christie Rampone. The team will miss their presence but not their play.

The biggest on-field loss from the World Cup team has got to be the early retirement of Lauren Holiday. One of the most insightful (literally) playmakers in the world, there’s no one on this team who can see a play develop and pass the ball as well as Holiday. If there’s anything positive about Holiday’s retirement, it’s that it makes the still crowded midfield picture a tiny less cloudy than it would be otherwise. You can pencil World Cup monster Carli Lloyd into the starting lineup. After rehabbing a knee injury between tournaments, she’ll be back at full strength, doing what she does best — scoring enormous goals in enormous games. In case you don’t remember or weren’t following the team before 2015, Lloyd scored both goals in the 2012 gold medal match to beat Japan 2-1 and the only goal in the 2008 gold medal match to beat China 1-0. Lloyd is the epitome of clutch. She’ll be joined on the field by a defensive midfielder. Morgan Brian is the first choice for this position but has been having some nagging hamstring issues. If she can’t go, Allie Long will replace her. Long is new to the team and is well deserving of a spot. She’s a more traditional defensive midfielder than Brian. At 5’8″, she’s only an inch taller than Brian, but she plays a much more physical game. In the other two midfield spots, Tobin Heath and Lindsay Horan are the two most likely starters. Tobin Heath is a shoe-in for the most improved player since last year. Known for a long time as an insanely skilled player on the ball, Heath has grown measurably since the World Cup in other aspects of the game. I’d now rank her as one of the best and most well rounded players in the world. She’ll strike fear in her opponent’s hearts every time she touches the ball. Horan is new to the team. She’s a strange mixture of Holiday-lite passing ability with Wambach-lite destructive aerial attacking ability near the goal. Everyone’s favorite player, Meghan Rapinoe just barely made the team after frantically rehabbing a torn ACL for most of the time between the World Cup and Olympics. She’ll come off the bench as a substitute. Missing from last year’s team, in addition to Holiday, are the retired Shannon Boxx and Heather O’Reilly.

Only the United States could lose the greatest striker of all time Abby Wambach… and get better. Wambach’s long time offensive partner Alex Morgan is in better form this year than she was last. She’s fully healthy and has seemingly found the scoring touch that she misplaced during the World Cup. She’s joined by two new dynamic weapons: Crystal Dunn and Mallory Pugh. Dunn was the last woman left off the World Cup team last year and she’s played like a woman possessed ever since. She led the National Women’s Soccer League in scoring and was named the NWSL’s most valuable player to boot. At 5’1″, she’s all speed and explosiveness. Mallory Pugh may be the most exciting addition to the team. Given what seemed like a “nice story” type of opportunity to play with the USWNT as an 18 year-old, she grabbed the opportunity by the throat and has not let go. At times, she’s looked simply like the best player on the field. As weird as it is to write this about a player so young, there aren’t really any holes in her game. She’s skilled, fast, has a great scoring touch, and looks entirely comfortable on the field with women much older and more experienced than her. Rounding out the strikers is Christen Press. Everyone, myself included, thought that Press was going to be the break out star of the 2015 World Cup. Instead, she got locked out of the starting lineup and barely played. Alas, I fear her fate could be the same in this tournament. It’s a shame, because Press is a player capable of transcendent moments, but she may not be able to get onto the field enough to show us any. Missing from the World Cup team, in addition to Wambach, is Sydney Leroux, who is pregnant, and Amy Rodriguez, who simply couldn’t make the team with the worthy additions of Pugh and Dunn.