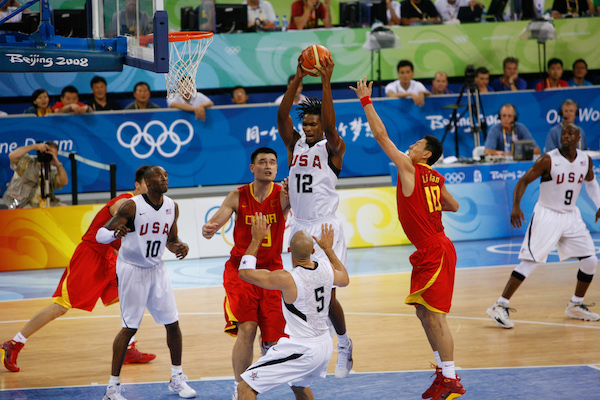 Basketball is the most American of sports. Invented in Massachusetts in 1891, it’s as American as Apple pie. So, what is it doing in the Olympics? Well, it’s been a long time since 1891, and since then basketball has become as French as a baguette, as Spanish as jamon, as Argentinian as steak, and as Lithuanian as Cepelinai.

How Does Basketball Work?

I’m going to skip the general nature of basketball, but if you want to brush up on that, here are some earlier posts I’ve written.

International basketball has always had slightly different rules than the ones American basketball fans are used to seeing in college basketball or the NBA or WNBA. Some of them are small and have little impact on the game but some are pretty big. Here are a few of the biggest ones:

Basketball may have the most balletic athletic movements of any team sport. Watch how the players not only hang in the air, but adjust their bodies to whatever the defense is throwing at them. Sometimes that means changing hands in mid-air, sometimes it means bouncing off a defender’s body and throwing up a shot on the way to the ground, sometimes it means shifting from one side of the basket to the other. In any event, the body control of these athletes is beautiful. Basketball also has beautiful movement at the level of a team. When a team is hitting on all cylinders, there are five people moving in complete synch with one another.

Olympic basketball has a men’s and women’s competition.

How Dangerous is Basketball?

Ten giant humans launching themselves into the air? That seems pretty dangerous, and it is… at least to their ankles. As anyone who’s ever played basketball knows, the most common injury is a turned ankle. This can be self-inflicted, during a quick change of direction or landing from a leap, but it happens most severely when one player comes out of the air and lands on another player’s foot instead of the even surface of the floor. When that happens, eek! Other than ankles, basketball has all the dangers of a contact sport.

What’s the State of Gender Equality in Basketball?

Gender equality in the sport of basketball is very good. The rules are virtually the same. It’s the subject of equipment that gets people’s hackles up in one direction or the other. Although women use a slightly smaller ball, they play on the same height basketball hoop. This changes the look and tactics of the game significantly. Although a few women have dunked in competitive play (and more in practice, I’m sure,) it’s not a regular part of the women’s game. This is either actually a big why women’s basketball is so much less popular than men’s or a convenient excuse. In any event, the relative height of the rim to the average height of the players makes a big tactical difference and people aren’t sure of how to feel about that.

Bookmark the full Olympics schedule from NBC. Basketball is from Saturday, August 6 to Sunday, August 21.

Read more about basketball on the official Rio Olympics site.