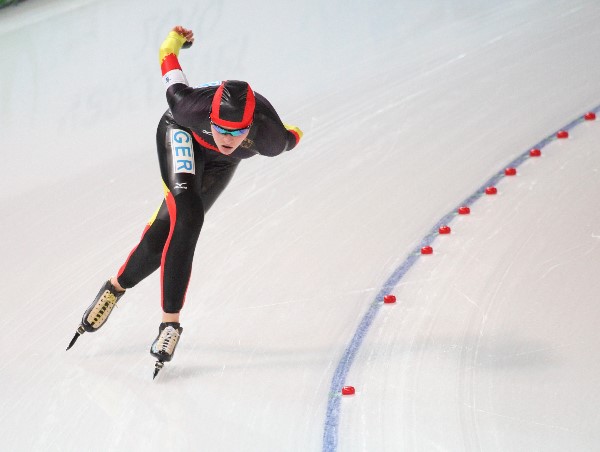 The first time you watch speed skating, you may be forgiven for thinking that it simply doesn’t have any details for you to focus on. Two skaters speed around a giant oval rink. They don’t interact. One of them is faster than the other. Eventually, at some point, they stop skating. All of that is true — appreciating speed skating is largely about appreciating the enormous amount of power humans are capable of producing and the amount of pain they are capable of imposing on themselves and enduring. Speed skating in a sport of humans as draft animals, regardless of how cool under pressure these athletes seem. The detail of speed skating to watch is one of the few important signs that a speed skater is suffering: when they begin to make small and unnecessary movements.

At the start or the middle of a speed skating race, skaters move in a lithe, long gliding stride. The upper body is bent at a 90 degree angle. On the straightaways, both hands are clasped behind the skater’s back. Aside from the speed skater’s tree-trunk-like legs, nothing moves. On turns, speed skaters continue to hold their inside hand behind their back but the outside arm comes out and swings rhythmically. At this point in the race, it seems like the entire purpose of the sport and the entire raison dêtre of the athlete is efficiency.

At the end of the race, particularly the longer races, however, things start to break down a little. Watch for any change in the body position and stride of the skater. Notice how an exhausted skater’s torso moves side to side a few inches farther than when she started the race. Observe that a skater who pushes himself to the very edge of his abilities has to strain to keep his inside hand behind his back during a turn. If possible, compare how one of the top skaters in the world is capable of maintaining 90% of her form all the way to the end of the race while the fifteenth best skater in the world completely breaks down and wiggles a tiny bit.

It may sound silly, but watching for these small unnecessary motions not only can give you an incredible appreciation for the power and pain of elite speed skaters, but it can also provide you with clues about who is likely to win the race.