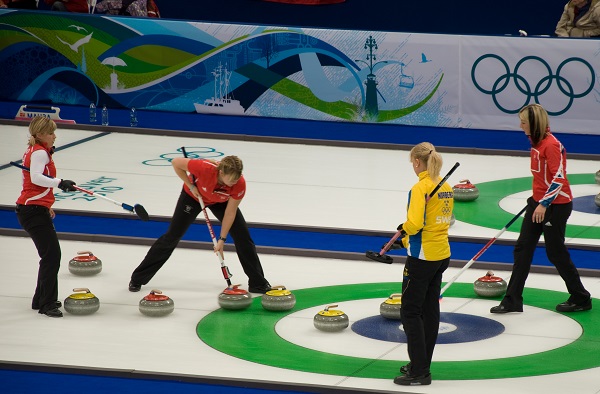 There are four curlers on a team. Three of them are actively doing something on any given shot. One curler “delivers” or slides the stone along the ice. This person is the center of focus on television, being the one who starts out touching the stone and then usually slides for a while looking pleased or tormented. Two other people on the team sweep brooms furiously in front of the stone as it slides down the rink toward the bullseye shaped target called a house. The fourth curler… well, if you’re not watching carefully, you might miss them entirely. They don’t actually do anything during the shot except for yell, and it’s hard to tell who is doing what yelling. If you watch right before the shot starts though, you will see this fourth curler, who is hanging out near the house, place their broom on the ice. They are setting the target for the curler delivering the stone. It’s not where the stone will end up, it’s the direction the stone will be thrown in. Any deviation from this path is based on all that frantic sweeping.

Given that this is the Olympics, the person delivering the stone is going to hit the target 95% of the time and you can bet the sweepers will sweep precisely the way they are supposed to sweep. So, if we assume all that proper execution, it’s actually the person who decides where their team should aim that’s making all the interesting decisions. This fourth curler is worth watching!

The most astounding aspect of curling is how the two sweepers are able to navigate through the target area without ever touching an already thrown stone. The next time you watch curling, focus on the sweeper’s feet. Notice how she nimbly steps over or around any stone in her path. She doesn’t break stride and her sweeping is seemingly not affected by her evasive maneuvering at all. And what’s more, she never seems to look down at all! It’s incredible!