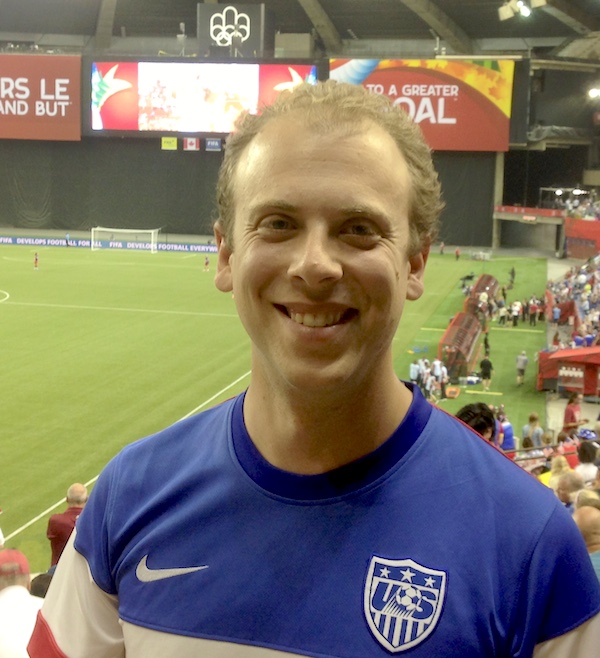 Last night, I had the distinct pleasure of being at the semifinals of the women’s World Cup in Montreal. A friend, Amshula, and I were part of the giant, pro-America, 51,000 person crowd in Montreal’s Olympic Stadium that witnessed a great soccer game between Germany and the United States, the first and second ranked teams in the world. Here are my reflections on the game.

Fourteen year-old girls are the best fans in the world. They launched the Beatles and dozens of derivative groups to world stardom. On Tuesday night, they were a big part of why the United States women’s national soccer team beat Germany 2-0 to advance to the 2015 women’s World Cup Finals. One of the big advantages that women’s soccer has over men’s is that they have, at least for now, a near monopoly on the 10 to 17 year-old female demographic. These are virtually perfect fans. They come out in droves, they bring their friends and families, they can scream like banshees, and because so many of them have played soccer for so much of their lives, they are highly intelligent fans. The crowd in Montreal’s Olympic Stadium wasn’t exclusively made up of tween girls but it was led by them.

As a man in my thirties, I was a part of a small minority for whom their was one enormous benefit. Almost uniquely in the history of live sporting events, there were virtually no lines for beer and the men’s bathroom. Unfortunately, hot dogs are age and gender agnostic, so it was impossible to acquire one.

Another unique aspect of the game (at least for me) was that my cellphone didn’t work. There was no wifi in Olympic stadium and I hadn’t bothered adding an international data plan to my cell service before the trip (What? Canada is a different country?) So, I couldn’t check Twitter, Fancred, and Facebook before and during the game. I wasn’t getting alternating irate and exuberant text messages from my friends and family. This left me feeling a little bit disconnected but it also gave me space to focus in on the game and just the game. I was totally present in the moment.

The only time I really missed my phone was before the start of the game when I was anxiously wanting to know who would be in the starting lineup for the U.S. team and I couldn’t tap my Twitter sources to find out. As I wrote in my preview to the game, Jill Ellis, the U.S. coach, had a real lineup dilemma on her hands. I had basically convinced myself that if she went back to the personnel of the team’s first four games, we would lose to Germany, but it seemed inconceivable that she would have the chutzpah to bench Lauren Holiday and Megan Rapinoe whose suspensions in the previous game gave birth to a more successful lineup. Ellis, I thought, was stuck between a rock and a hard place. When the lineups were announced by a PA announcer in the stadium and those two players were called out as being starters, my heart dropped. Before it hit bottom, as I continued to listen, I realized that I had also heard the names of three other midfielders: Morgan Brian, Tobin Heath, and the indomitable Carli Lloyd. My heart started to rise again. Stuck between a rock and a hard place, Coach Ellis had found a third option: play five midfielders and only one striker. I didn’t know if it would work, but at least I didn’t feel sure it wouldn’t. Watching at home, or with a cell phone, I would have had this tactical choice teased by people in the know before the lineups were announced and instant-analyzed right after. In the stadium, I had to figure it out on my own.

The first half was a nerve-jangling 45 minutes of amazing soccer. The two teams seemed almost perfectly matched with Germany perhaps carrying a slight edge in terms of possession but the United States creating the better scoring attempts. We probably should have scored. Alex Morgan, the sole striker, had a few chances that someone with better scoring touch would have put in. At halftime, I felt honored to be there, witnessing such a great game in person but I couldn’t shake the creeping feeling that this was exactly the type of game that Germany wins. They get outplayed but hang around, keeping the game close until something, usually a penalty kick, puts them over the top. If it happened to poor, valiant France in the quarterfinals, it could happen to us.

My worst fears seemed to be moments away from being realized when Germany won a penalty kick near the 60 minute mark after a Julie Johnston foul. Olympic Stadium is an enormous place. It holds over 60,000 people and it looks like it once seated more. The current layout is a horse-shoe in three tiers, with the open side closed off by a wall with a scoreboard and jumbotron. Near where the wall begins, you can see what looks to be the original, stone bench seating that may once have circled the entire field. The result of this renovation, is that one side of the field is relatively quiet, with fans only on the sides of the field, while the other is a cacophonous riot with fans screaming from all directions. The United States began by defending the quiet side of the field which means they were defending the loud side in the second half when the penalty kick was called. This small logistical fact may have saved the game.

When the ref motioned towards the penalty spot, signaling for a penalty kick, the crowd jumped to its feet and started screaming. It screamed while a series of U.S. players, first captain Carli Lloyd and then veteran midfielder Megan Rapinoe approached the ref to argue the call, or maybe to exchange stock tips, who knows. It kept screaming while Celia Sasic placed the ball onto the turf to her liking and prepared to take the biggest penalty kick of her life. For some reason, goalie Hope Solo took her sweet time getting ready to defend the kick. She walked around. She drank some water. She squirted water on the ground. Then she set up five feet off the goal line. The ref motioned her back. She stepped back a foot. The ref motioned her back again. We might never know why Solo did that. Maybe she was nervous. More likely, she understood the drama of the moment and the effect that 50,000 screaming American fans could have on a German player preparing to take a penalty kick that felt like it would decide her country’s fate. If Solo was playing to the crowd, we knew our role. We screamed. And Sasic missed. Wide left. We’ll never know what would have happened if she had made that kick. Maybe the U.S. team would have had enough to come back and score their two goals anyway, but I doubt it, just like I doubt that she would ever have missed if the kick had been on the other side of the field; the quiet side.

The missed Germany penalty kick seemed to give new life to the U.S. team and from then on, things started happening fast. The teams exchanged possession and offensive forays into opposing territory. Then, Alex Morgan, making her ten thousandth run behind the German defense, was fouled in the box. Penalty kick, U.S. There’s no way we could miss this. Not after Sasic missed hers – not with Carli Lloyd at the spot. No way. No!! She didn’t miss! GOOOAAAL!! Pandemonium in the stands. Not the drunken pandemonium of an adult male dominated crowd but pandemonium nonetheless. Despite everything, all of my foreboding feelings about the game, Germany’s skill and penchant for stealing games, the U.S. was up 1-0 with 20 minutes to go. Holding on to a one goal lead for 20 minutes after a five-plus game shutout streak shouldn’t be too hard, right? It felt hard.

Germany, to their credit, threw everything it had at the U.S. defense but nothing worked. One could say it wasn’t their night. Or you could say that the U.S. back four: Meghan Klingenberg, Julie Johnston, Becky Sauerbrunn, and Ali Krieger are superheroes who absolutely, incontrovertibly deserve their own Hollywood epic. Then, just when the crowd was beginning to look at the clock and will it to move faster, super-sub Kelley O’Hara, who had an immediate physical impact on the game when she checked in, knocked in a pass resulting from a ridiculously skilled Carli Lloyd run in the box. 2-0 USA. More pandemonium, this time with a sense of victory and finality.

The rest of the time flew by, with the team playing defense, the crowd screaming, and the German team desperately trying to claw their way back into the game. Abby Wambach, who drew a standing ovation along with chants of “Abby, Abby” just by warming up, came into the game in the surprise role of a midfielder to provide some extra physicality. (Note: I see now that her sub was actually made before the O’Hara goal.) The crowd’s adulation was a fitting tribute to Wambach’s long and insanely decorated service to the country’s national team but it was smart for Ellis to use her in a reserve role. Wambach’s speed was never her forte but now, at thirty five, and with the game moving faster and faster, it’s a flaw that could have proven fatal earlier in the game.

There was a strange moment in stoppage time when the ref blew her whistle to allow a final U.S. sub to come onto the field. The crowd and at least the German team thought she was signalling the end of the game. The crowd roared. The German players fell to the ground in exhaustion and defeat, only to have to rise again and play out the last minute or two of the game. What a strange thing to have to do – to experience the end and then be forced to go on, all the while knowing that, down two goals with mere moments left, defeat is inevitable.

When the end finally came, the player I was watching was center back Julie Johnston. When the whistle blew, she instantly physically transformed from a young woman in the prime of her powers to a tired, elderly lady. She stumbled, she stooped, she limped like every muscle, every bone, every joint in her body hurt. She was totally drained. When Megan Rapinoe sprinted up from behind to envelop her in a tackle/hug/sandwich with goalie Hope Solo, I was actually concerned for Johnston’s well-being. What an amazing reminder of just how much effort these women put into each game.

In what may be an interesting coda, it was only after Amshula and I escaped the stadium through a subway full of gleeful American fans and glum German ones, after we found ourselves some tacos to inhale, after we got back to the wifi-friendly confines of our hotel, and after I read about the game in articles by people who had access to television coverage and instant replays that I learned that the Romanian ref, Teodora Albon, had apparently helped the U.S. cause with a couple of very important bad calls. From within the partisan crowd, I didn’t think Julie Johnston deserved a red card for her foul in the box. Frankly, we didn’t even think it was a foul! Nor could we see that the foul on Alex Morgan was just outside the box and therefore not really deserving of a penalty kick. All we knew was that we hated the ref when she called fouls against the United States and loved her when she called fouls for us. Live sports in person — there’s nothing like it.